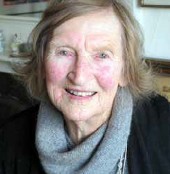 Avis was born into a family of artists. Both her great grandfather and her grandfather were highly regarded Tasmanian landscape painters. Avis’s father, Sydney Higgs, was a well-known Wellington watercolourist who exhibited at the Academy between 1921 and 1971. Sydney Higgs was one of the Pumpkin Cottage group of painters. Avis recalls accompanying him on painting weekends to the cottage when she was a child. It was here that she began painting sitting in the paddock with her paints and pencils.

After leaving school in 1936, Avis enrolled at Art School with a view to a career in commercial art. In 1937, she won second prize in a national poster competition for “the best poster symbolising peace.” She then
took up a full-time design position with National Distributors, who were responsible for poster design and printing for the Self Help chain of grocery stores. When World War II broke out, Avis resigned from National Distributors to train as a nurse. While on section at Wellington Hospital, she contracted diphtheria. Her aunt, a milliner living in Sydney, suggested she visit for a fortnight’s holiday. Avis resigned from nursing and embarked on the next chapter of her life. Getting back to New Zealand proved difficult: trans-Tasman boats were needed as troop ships. Also, Avis had fallen in love with the bright lights of Sydney. She landed a job as senior designer at Silk & Textile Printers Ltd. Before the war, quality dyes had come from either Germany or Japan. Avis was instructed to design attractive, fashionable textiles that used as little dye as possible. 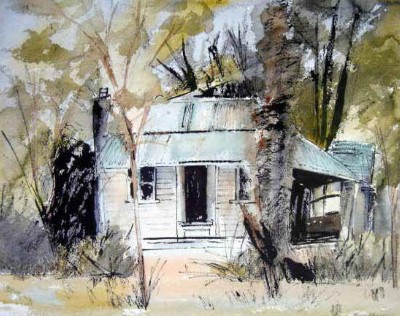 Avis’s designs incorporated Australian motifs drawn from the life she saw around her: street scenes, Bondi Beach and Sydney landmarks figured, along with Australian flora and fauna. Her designs proved popular: Avis received a Commonwealth Government commendation for her work. In her spare time, she attended art classes and exhibited at the Contemporary Art Society of NSW. “I just couldn’t stay away from it,” she says of her love of painting.

Returning to New Zealand at the beginning of 1948, Avis began exhibiting at the Academy where by the standards of the time her work was decidedly avant-garde and the Gallery of Helen Hitchings, New Zealand’s first dealer gallery. She took a job designing cinema screen advertisements in order to raise money for a trip to England where she hoped to break into the world of international textile design.

Avis arrived in England in July 1951, during a severe recession in the British textile industry. She was beginning to make headway in the London textile scene when fate intervened. A few days before Christmas, 1951, Avis was involved in a serious car accident just outside Rome. The driver, Avis’s friend, was killed and Avis seriously injured.

She returned to New Zealand in 1952. Avis’s career in textile design was effectively over. However, half a century later there was to be a revival of interest in her design work. Avis Higgs: Joie de Vivre by Douglas Lloyd-Jenkins, published in 2000 to accompany an exhibition of the same name at the Hawkes Bay Museum, gives a detailed account of Avis’s career as a textile designer.

"I had such an interesting life with textile designing but I really wanted to just paint pictures," is how Avis sums up this period of her life.

She was to get her wish. On the boat voyage back from Britain, Avis met her future husband, Jock Beere. Back in Wellington, painting became her primary focus and Avis soon gained recognition for her work. She has been an important member of the Wellington art scene for over 60 years. Over this period, Avis has won a number of major awards: the National Bank Watercolour Award in 1964, the IBM Art Award in 1985 and in 2006 the Governor General’s Art Award for "the long service of an outstanding artist". She is featured in the book New Zealand in Watercolour by Denis Robinson. Avis has a painting in Te Papa’s collection and is represented in the collections of a number of provincial art galleries.

Avis paints mainly watercolours. When she discovered Japanese ink she also did a lot of black and white paintings, executed in watercolour style. She paints a variety of subjects. "For years I loved the bush." She also "rather liked abstracts". The Gallery of Helen Hitchings, where Avis exhibited her work, "liked to have very contemporary and abstract paintings". The walls of Avis’s Thorndon home, featured in an article in the September 2010 edition of 'NZ House & Garden' magazine, are covered with paintings with others stacked around the room – something many artists will identify with. Consequently Avis didn’t buy many paintings but instead purchased pottery, "At least I had room for them."

"As it stands, Avis Higgs' work as a textile designer ranks amongst the most important, and engaging, bodies of work yet created by a New Zealand designer."

To view a video clip of the exhibition Avis Higgs: Joie de Vivre, go to Collections on Te Papa’s website and search for Avis Higgs. Click on the link to The Big Art Trip then scroll through the clip selection to clip 5 and click on "select". The section on Avis follows an interview with jeweller Peter Deckers.

Avis has had an equally distinguished career as a watercolourist and continues to paint and to exhibit well into her 95th year.


Copyright © Watercolour New Zealand and its contributors. All Rights Reserved.