Splash 2017 Sales
John, one of the Academy volunteers, who correctly predicted that we would sell over 50 paintings at last year’s Splash, was confident that, given the quality of the works in this year’s exhibition, we would sell around 70. So we were all disappointed when at the end of the exhibition we had sold only 38. Whether this was because the exhibition coincided with the aftermath of the election and uncertainty regarding the make-up of the next government is debatable. However, it seems that retail sales in general - not just the art market - have been flat recently, in Wellington at least.

Of the 38 paintings sold, 23 were priced at under $500. Only 3 paintings sold for prices of between $500 and $750. 12 paintings sold for over $900. These were generally larger works - half sheets or full sheets.
One marked difference from last year is that we sold more higher-priced paintings. Last year, we sold only one painting priced at over $1500. This year we sold three $1900 paintings, and two $2200 works.
The most popular subjects amongst the paintings that sold were Wellington scenes, followed by South Island landscapes, then paintings of flowers, portraits and figures, and English and European scenes.

As to the award winning paintings, the winner of the Supreme Award sold as did the winners of the awards for Most Innovative and Best Painting by a Junior. Only two of the five Merit Award winning paintings sold. Five of the top ten paintings in the People’s Choice Award did not find a buyer. It’s interesting that 14 of the 38 paintings sold got 5 votes or fewer in the People’s Choice (the winning painting got 104). So the popularity or the quality of a painting does not necessarily mean that it will sell. Buyers are a small subset of the visitors to an exhibition – fewer than 2% of them actually buy a painting.


This year’s 'Splash' was a joint exhibition, held in conjunction with Ceramicus, an exhibition by the Wellington Potters’ Association.

Guest artists for this year’s Splash were Richard Bolton from Geraldine and Wellington artist Dianne Taylor.

Richard moved from England to Geraldine with his New Zealand born wife in 2004. Early in his painting career his work attracted the attention of publishers. Richard is the author of a number of books on watercolour technique as well as articles in such well known periodicals as The Artist, Leisure Art and Artists and Illustrators.

Dianne is a well known Wellington artist who won the Watercolour New Zealand Portrait Award in 2010 and the French Art Shop People’s Choice Award for her painting Le Café at last year’s Splash. We’re delighted that Dianne and Richard have agreed to be joint guest artists at this year’s exhibition.

There were 250 paintings to view including a wide variety of paintings featuring Wellington, NZ landscapes, flowers and abstracts, as well as an award winning display of ceramic art presented by Wellington Potters.

We are very appreciative of the generous awards from these sponsors. The Committee worked hard and would like to thanks all those members who gave their support in various roles. 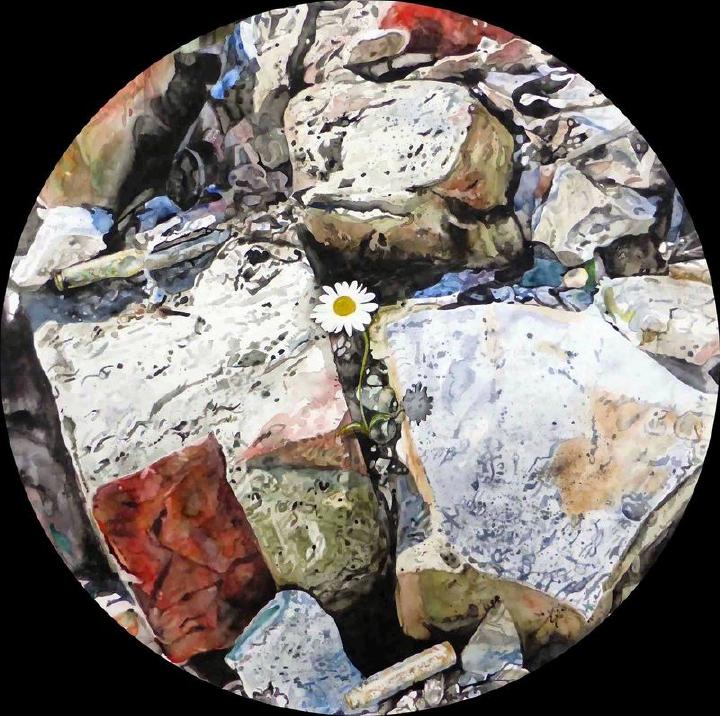 The artist writes: ‘Hope Rising’ is inspired by the desperate plight of many in warzones such as we have witnessed in such places as Aleppo and Mosul and is a reflection on the idea that when the world says ‘give up’, hope whispers to us ‘try it one more time’. It is also an allegory on personal lives and the often unseen struggle many of us confront on a daily basis.

Judges’ comment: The work is painted loosely, but as you stand back the detail is all there. Looking closer you see bullet shells in the crags. A poignant reminder of Passchendaele and all that happened there. 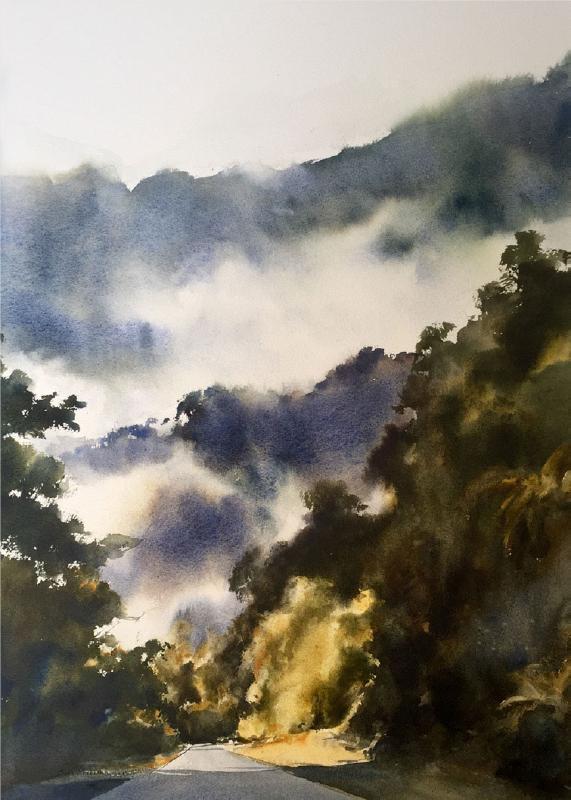 Bernadette says: "It’s the same for all of us, that constant search for an exciting idea that will make a unique and interesting painting which make us fulfilled and, with any luck, others too. So much pressure.

Being in the right place at the right time when the sun followed directly after heavy west coast rain, what we saw for just a brief moment was just so, so exciting. Trees are my absolute favourite subject especially our New Zealand beech forests. The challenge is showing light without ever using masking fluid. The joy of finding one tiny area of New Zealand changing so drastically with light inspires me to keep painting not only huge landscapes but also the humble things around us.

Thank you Watercolour New Zealand for hosting another wonderful exhibition for all of us."

Judges’ Comment: It is easy to overwork large areas of foliage, but this artist has achieved stunning results mixing colours on wet paper. 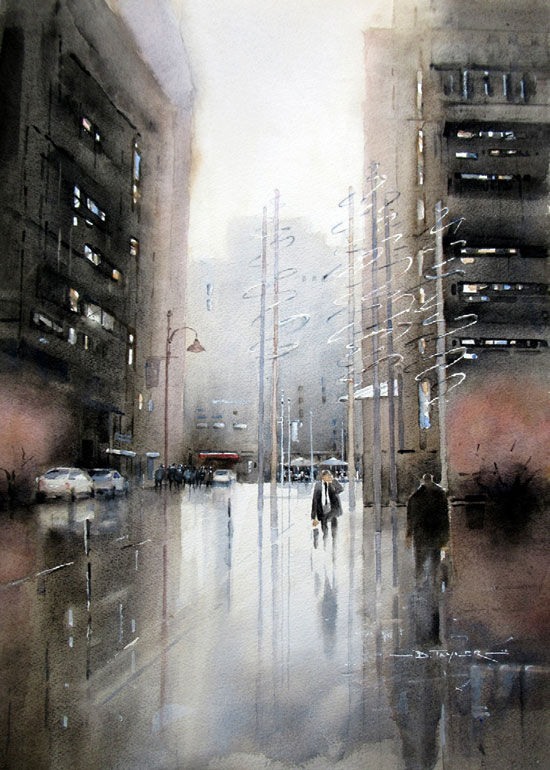 Looking up Pinterest for inspiration, I came across an industrial type painting, with a very minimalist look, monotone, very soft and yet with a harshness to it. Thought - I’ll paint a Wellington street scene in that style. But of course I just HAD to add people, cars, reflections, umbrella, lights etc. - the minimalist look was fast disappearing.

For this painting lots of pigment and lots of water was needed. To allow for large washes on the buildings I used masking fluid for the windows. The dark on the buildings was black gouache.

The colours I used, as well as the black gouache, are Ultramarine Blue, Raw Sienna, Permanent Rose and small dashes of Cobalt Blue and Cadmium Red.
The Post Office Square installation is a feature and certainly adds to the finish of the painting. Fine lines of masking fluid were put down for this before laying down the initial washes. To apply the masking fluid I used the flat edge of a painting knife. This gives a better result than a brush.
Although I added many details, this painting still has a slightly minimalist look to it. 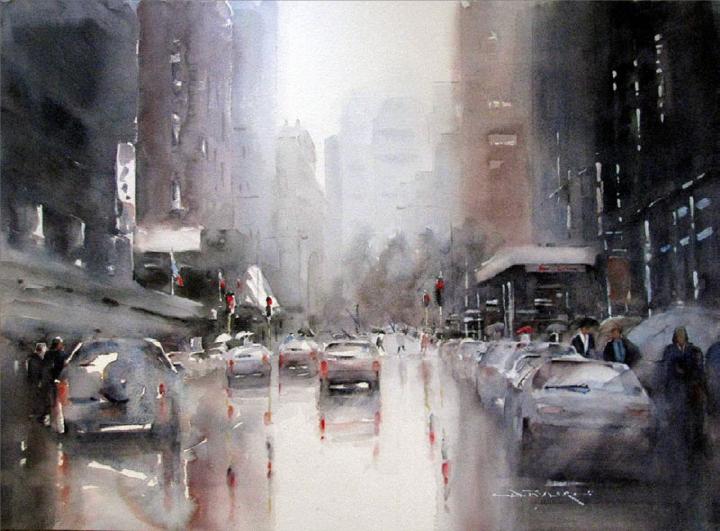 This is Victoria Street in Wellington. I began with washes for the sky and distant buildings. When this was dry I started on the left with the car parking building, then the car. I applied the pigment and then added water - keeping it running. When it dried I was happy with the result and was determined to finish the painting in the same manner. Not so. I began fiddling and the painting became tighter so the right side is not quite as loose as the left. Also I had painted over many of the windows on the right which left the buildings looking dull, so added touches of white gouache to brighten them up. Good ol’ gouache!!
Colours used are Ultramarine Blue, Burnt Sienna, Raw Sienna, Permanent Rose, Sepia plus small dots of black here and there. 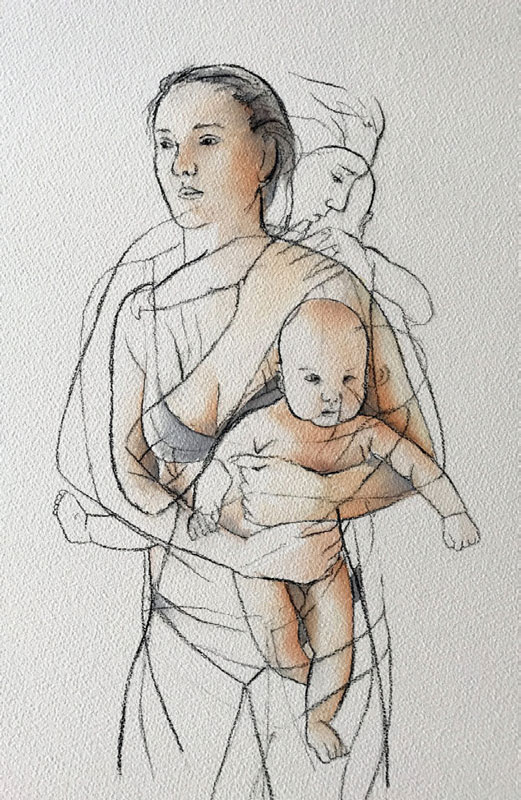 Marcus Ebbett won the Gordon Harris Award for Innovation in Watercolour with a portrait of his wife and baby son.

Marcus: “From the bride on the wedding day in last year’s Splash exhibition, next came the baby, so I started exploring with different sketches and paintings of my wife Soren and our 5 month old baby boy Noah.

This was very fresh in my mind and actually offered me a way to express the experience I was going through as well as Soren and Noah’s experience. I put
into the painting the things I could see both physically and emotionally of how Soren and Noah interacted. A theme emerged of showing these different emotions within one image. The opposing mediums of a harsh charcoal line and soft watercolour added another element of emotion. Order and chaos. I left the viewer to fill in the blanks by leaving a slightly unfinished feel to it.”

Judges’ comment: I liked the unfinished approach the artist has used.
You feel he is exploring the subject and is not afraid to experiment. 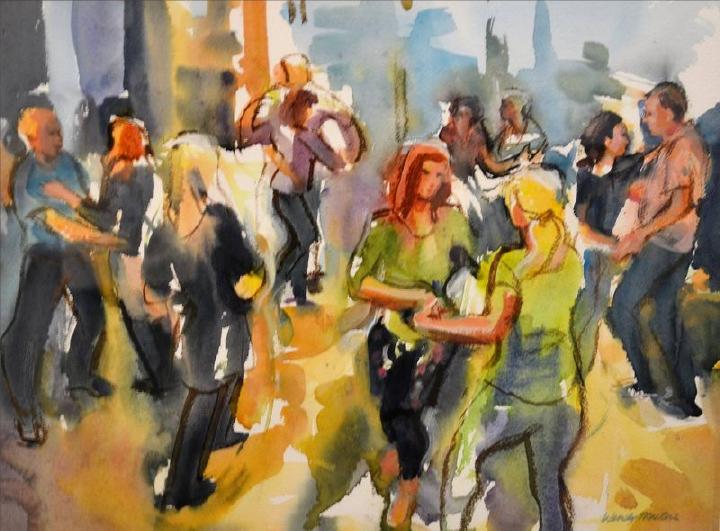 Wendy: “I’m delighted and encouraged by the response to the merit award from Watercolour New Zealand Splash 2017 - from painters, friends and fellow Kapiti Salsa dancers at our local Mediterranean Warehouse. To paint moving figures has been a new venture for me, and I would like to acknowledge the help of Helena Fierlinger in photographing some dancing for me to use as reference. I struggle to get the steps right on the floor as well as in paint!”

Judges’ Comment: The picture is all fluidity and movement. The bravura technique enhances the composition. A very pleasing subject.