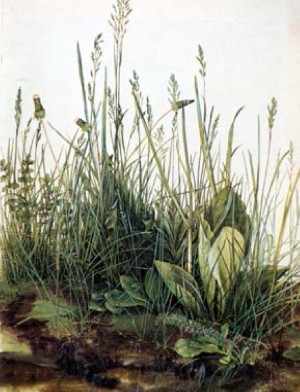 Albrecht Dürer, regarded as the father of European watercolour, was born in Nuremberg in 1471. Both of his grandfathers and his father were goldsmiths so when Dürer left school he became an apprentice in his father’s workshop. However, when it became apparent that he was more interested in drawing and painting his father apprenticed him to a respected Nuremberg painter and entrepreneur, Michael Wolgemut.

In 1490, his apprenticeship over, Dürer left for four years of travel as a journeyman, a practice still followed by some German apprentices to this day. It’s said that travel broadens the mind. The goal of the Wanderjahre was to gain experience of other workshops, methods and styles.

Dürer returned to Nuremberg in May 1494 to find that his father had arranged for him to marry Agnes Frey, daughter of a wealthy master craftsman. The marriage had certain practical advantages: an artist could not open his own workshop unless he was married. In addition Dürer received a dowry of 200 florins, a considerable sum. The union, which did not produce any children, was not a happy one. Dürer’s lifelong friend, Willibald Pirckheimer, described Agnes as suspicious, pious and scolding. He claimed that she so gnawed into his heart and tormented him that she drove Dürer to an early grave. Less than two months after the wedding Dürer departed for Venice, leaving his wife behind.


"The Great Piece of Turf" by Albrecht Dürer


On the way, he painted watercolours of scenes he saw on his journey. No doubt Dürer chose watercolour because of its considerable advantages for the travelling artist: watercolours were portable, did not require a lot of
paraphernalia and dried quickly. The paintings he produced en route to Venice, along with his earlier efforts in watercolour, were little more than tinted drawings whose primary purpose was to record the scene. They were
not particularly artistic in their execution and showed little appreciation of perspective.

In Italy, Dürer studied the ideal proportions of the human body, based on the classical writings of Vitruvius, and learned about perspective, which Italian artists were investigating as a means of depicting space more realistically. He also learned how to draw with the brush. On his way back from Venice and after his return to Nuremberg, Dürer painted landscapes which showed a new-found ability to exploit watercolour to convey light and atmosphere. Before Dürer, landscape had been relegated to a supporting role as a background in portraits and religious paintings.

Dürer was the first artist to depict landscape as a subject in its own right. Dürer was fascinated by the natural world. “For in truth, art is implicit in nature,” he wrote, “and whoever can extract it, has it.” In Venice he painted two watercolour studies, Sea Crab and Lobster, which demonstrated his amazing powers of observation and meticulous attention to detail. Dürer returned to Nuremberg at the end of 1495. Some years later, he painted two of his most famous watercolours, Young Hare (1502) and The Great Piece of Turf (1503). 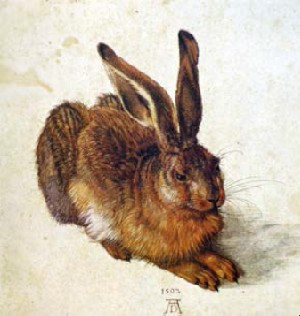 Dürer’s meticulous rendering of the natural world had a strong influence on the development of the watercolour painting style of American artist Andrew Wyeth. When Wyeth was thirteen, his father gave him a facsimile publication of Dürer’s watercolours and prints which he referred to so often it was practically worn out on the edges.

Wyeth wrote “I have said to myself many, many times that I think Dürer must have been the originator of the drybrush method of watercolour. People have thought that perhaps I was, but I certainly am not.

I think his technique in the Hare is unbelievable in the way he did the texture of the pelt, in such a way that each hair seems to be a different hair of the brush. Oh, I can feel his wonderful fingers wringing out the moisture of that brush, drying it out, wringing it out to get that half-dry, half-lingering dampness to build up, to weave the surface of that little creature’s coat....To me it is his greatest work next to The Large Piece of Turf. Of course his woodcuts are terrific, but I think some of his watercolours are fabulous.


In A History of Watercolour, Bernard Brett wrote “Between Dürer’s death in 1528 and the beginning of its great revival in the early years of the 18th century, watercolour became virtually a forgotten art. Its revival is a unique phenomenon in the history of Western art, which at its heart coincided with the Industrial Revolution and became an important manifestation of Romanticism, yet was curiously confined almost exclusively to England....True, it was in England that artists saw its possibility as a medium and extended it to full maturity as an art form in its own right; but watercolour painting had no spontaneous, miraculous birth there.

Albrecht Dürer, working in both gouache and transparent watercolour to produce meticulous naturalistic studies of animals and plants and sweeping views of Alpine scenery that anticipated the later English topographers and Romantics had led the way.”