“I’ve had people say to me, ‘Why do you waste your time with watercolour, it’s such a light medium, a fragile medium. It lacks depth.’ Well it isn’t the medium that lacks depth, it’s the artist.”

“Now about watercolour,” Wyeth said in an interview, “the only virtue to a watercolour is to put down an idea very quickly without too much thought about what you feel at the moment.

In some aspects it is similar to drawing but drawing in all aspects of colour. With watercolour, you can pick up the atmosphere, the temperature, the sound of snow sifting through the trees or over the ice of a small pond, or against a windowpane. Watercolour perfectly expresses the free side of my nature. You know it’s funny, some years ago I remember seeing a book entitled Making Watercolour Behave. That’s such a ridiculous mistake. Watercolour shouldn’t behave, it simply shouldn’t.” One of the most famous American artists of the twentieth century, Andrew Wyeth (1917-2012) is best known for his tempera paintings. 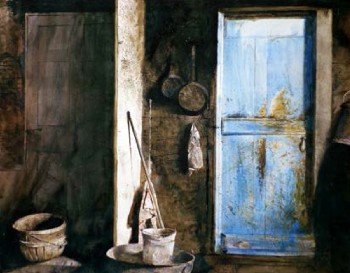 Wyeth’s painting Christina’s World is one of America’s four most iconic images along with Grant Wood’s American Gothic, Gilbert Stuart’s portrait of George Washington and Whistler’s Whistler’s Mother. But it was as a atercolourist that Wyeth first achieved national recognition.

When Wyeth was 18 or 19 his father, N C Wyeth, the foremost American illustrator of his era, showed some of his son’s watercolours to William Macbeth, a New York gallery owner. Macbeth was so impressed he offered Wyeth a one-man watercolour show. The Great Depression had deflated the art market and at the end of the opening night only one painting had sold. Embarrassed by the lack of sales, Wyeth dropped by the gallery round noon the next day to see if anyone had visited the show. The exhibition was packed. Before the day had ended, all twenty three paintings had sold. 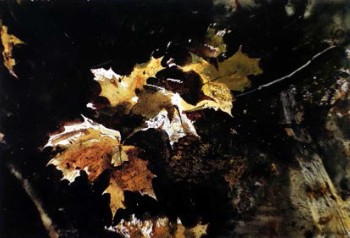 Wyeth recalled, “I achieved a sort of renown for watercolours, gained considerable confidence, and even made a little money – cleared about five hundred dollars after the freight bills.” By the early 1940s, Art News magazine was hailing Wyeth as “Watercolour’s White Knight”.

Wyeth’s early watercolours owed much to the style of American artist, Winslow Homer. “I loved the work of Winslow Homer, his watercolours, which I studied intensely so I could assimilate his various watercolour techniques.” Although initially pleased with his success, Wyeth came to feel that his work was “too free, too deft, too popular, perhaps still too undisciplined.” He felt “a terrible urge to get deeper, closer to nature.” 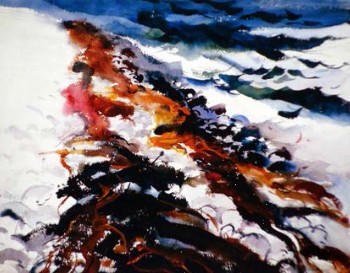 For his most meticulous and detailed work, Wyeth turned to egg tempera, which he learned from his brother-in-law, Peter Hurd. He worked painstakingly on his tempera paintings, typically completing between two to four in a year. He also adopted a style of watercolour painting which he called drybrush, based on the technique of the German Renaissance artist Albrecht Dürer.

He told an interviewer “Now drybrush comes to me through the fact that after I finish a tempera I may feel exhausted. I may have worked four or five or six months on it and I’m desperately tired. But then I may see something that interests me and watercolour doesn’t have the strength somehow. I start with a watercolour sometimes and realise, damn it all, I feel stronger than that. I want to go into it with a little more detail so I start working in drybrush.... Garret Room is a very good example. 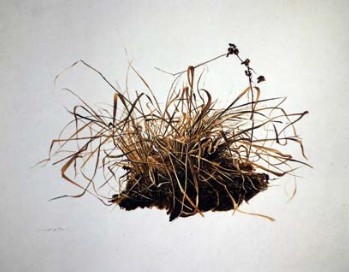 I started that as a free watercolour with broad washes done very quickly and then became fascinated by the pillow his head was resting on....So it turned into a drybrush.”

Wyeth described his drybrush technique as follows; “I work in drybrush when my emotion gets deep enough into the subject. So I paint with a smaller brush, dip it into colour, splay out the brush and bristles, squeeze out a good deal of the moisture and colour with my fingers so that there is only a very small amount of paint left. Then when I stroke the paper with the dried brush, it will make various distinct strokes at once, and I start to develop the forms of whatever object it is until they start to have real body. But, if you want to have it come to life underneath, you must have an exciting undertone of wash. Otherwise, if you just work drybrush over a white surface, it will look too much like drybrush.

A good drybrush to me is done over a very wet technique of washes....Drybrush is layer upon layer. It is what I would call a definite weaving process. You weave the layers of drybrush over and within the broad washes of watercolour.” 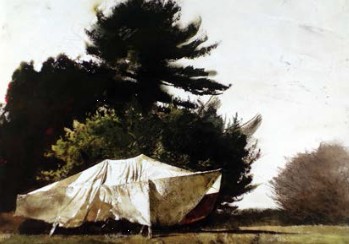 Every painting he did, said Wyeth, started with an emotion – something he just had to get out. “You can have all the technique in the world and can paint the object, but that doesn’t mean you get down to the juice of it all. It’s what’s inside you, the way you translate the object – and that’s pure emotion.” He was conscious of the dangers of realism “If you get too accurate, it becomes dull as hell.” Photorealism, according to Wyeth, was “like a man who gets up and speaks beautiful English but doesn’t say anything.” For Wyeth, it was not enough for a realist painting to be an accurate depiction of the subject. It also had to convey strong feeling: “Intensity - painting emotion into objects - is the only thing I care about. There are people who like my work because they think they’re seeing every blade of grass. They’re not seeing the tone.”

Wyeth was adamant that a successful painting must be underpinned by strong abstract elements: “If my work has any importance at all, it will live not for its subject matter but on its tonal off-and-on quality, on its shapes, another core embellished with realism. The sense that there’s something else there.” He used to turn his paintings upside down, study them in a mirror and in twilight to see whether they contained the abstract elements he was after. “If it doesn’t excite the imagination upside down, if it doesn’t have an abstract element, then it lives just on its subject matter or being contemporary and it’s dead wood.” 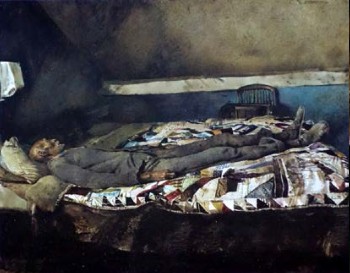 “I don’t stand there and placidly ‘paint a picture’,” said Wyeth of his approach to watercolour. “I can’t stand those smooth things done in the studio with a hairdryer to dry your washes. My best watercolours are when there’s scratches and spit and mud, gobs of paint and crap all over them. I might as well be in an orgasm when I get going.”

He felt that a watercolour should be a sort of outpouring of the subconscious: “The brain must not interfere. You’re painting so constantly that your brain disappears, and your subconscious goes into your fingers and it just flows.

If you think you’re painting a good watercolour, you can be sure it’s lousy. It is important to forget what you are doing – then a work of art may happen.”