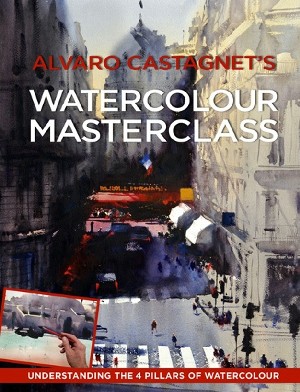 Alvaro Castagnet’s Watercolour Masterclass is aimed at painters who have mastered the basic techniques: ‘technique is not what I want to explore in this book,’ says Alvaro. ‘I want you to discover and exploit your personal vision – your own way of looking at the world.’

Part 1 of the book, Essentials, contains three sections. In the first, Think and Feel your Way to Emotive Art, Alvaro advises readers to find a scene that moves them, plan first, then paint from the heart. Learn from every
painting you make, he says. All the lessons are there in your own work.

The second section, Materials: Setting up to Paint, recommends the products Alvaro endorses. A section at the end of the book, Use the Art Materials Alvaro Chooses, sets out how to purchase them from his website, as well as plugging his instructional DVDs and workshops. A well known Australian watercolourist relates how Alvaro, whose native language is Spanish, confided to him that he hates his accent. ‘There’s one word you pronounce perfectly, mate,’ he replied, ‘and that’s “dollar”.’

In the third section, Brushstrokes, Alvaro advises varying your brushstrokes: ‘Diversity is the key, and the fewer brushstrokes you make, the better.’

The book’s second part, deals with what Alvaro calls The 4 Pillars of Watercolour: Colour, Shape, Value and Edges.

If the colour scheme in a painting fails, says Alvaro, the painting will also fail. Choice of colour should be an expression of the individual artist’s personality but a limited palette often has more impact than using lots of colours. Alvaro recommends painting with a good balance of warm and cool greys. When mixing different greys he often makes use of the leftover colour on his palette which ensures that the greys will be harmonious with the colours he has already used. He advocates using secondary and tertiary colours rather than colour straight from the tube.

Alvaro advises considering the small, medium and large shapes in a scene then making sure that they are interconnected to give your painting harmony, rhythm and impact.

The tones in your painting should be simplified, Alvaro suggests, by working mainly with four major values: two light, two dark. He likes to create strong contrast around the focal point and uses more subdued values in the surrounding areas in order to draw the viewer’s attention to the centre of interest. When you understand tonal value, says Alvaro, you will understand light.

Having a balance of edges in every painting is important, he maintains. Alvaro’s advice is to plan the edges in each painting in order to know when to paint them, as the degree of wetness of the paper determines whether the edge will be hard or soft.

The paintings that accompany the section on the 4 Pillars of Watercolour are used to illustrate the points Alvaro is making in the text. A final section of the book features 8 step by step demonstration paintings.

Alvaro is one of the world’s outstanding watercolourists. Alvaro Castagnet’s Watercolour Masterclass is more of a coffee table book showcasing his artwork (and you can learn a lot by looking carefully at his paintings) than a handbook of instruction. It’s a book for the reasonably proficient artist who is primarily interested in having a great collection of watercolour paintings to look at and admire.