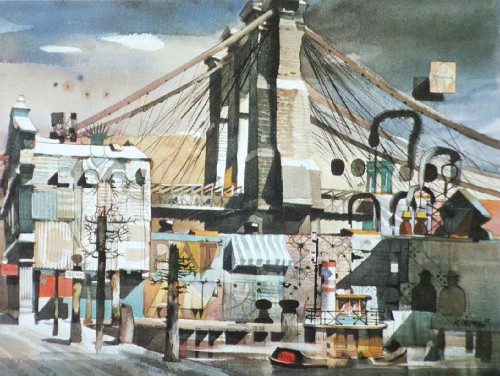 Dong Kingman (1911-2000) was born in Oakland, California but grew up in Hong Kong where he received his earliest art training in calligraphy, traditional Chinese watercolour painting, and later on, Western painting techniques.

During the Depression, he returned to the United States where he lived in San Francisco, working at a number of jobs and painting whenever he could. His first one-man show gained him immediate recognition and enabled him to work for the art project of the Works Progress Administration, a New Deal scheme that paid American artists to produce artworks which were displayed in public buildings. Kingman established himself as one of the best known California style watercolourists. At the end of World War II he moved to New York.

Kingman achieved considerable fame for his watercolours which are in the collections of many major museums
including the Metropolitan Museum of Art, the Museum of Modern Art and the Art Institute of Chicago. Kingman was the most famous Asian-American of his era.

‘I am Oriental when I paint trees and landscapes, but Occidental when I paint buildings, ships, or three-dimensional subjects with sunlight or shadow,’ Kingman said. Asked why he was so fascinated by architecture and cityscapes he replied, ‘I was brought up, and have always lived in cities – Oakland, Hong Kong, San Francisco, New York City – and always right in the heart of the asphalt jungle, amid poor people in busy, noisy, congested areas. After many years, I’ve become familiar with my cities, with their people and animals, and with the ups and downs, ins and outs of their streets, parks and buildings.’ Bridges were one of Kingman’s favourite motifs. He found them interesting because of their simple forms, monumental shapes, and strong sunlight and shadows.

South Street Bridge, in the collection of the Metropolitan Museum of Art, shows Brooklyn Bridge seen from a fish market in South Street. Like most of Kingman’s urban scenes, a closer inspection reveals any number of wacky details. The two small signs to the left of the painting both say ‘THINK,’ and this is also the name on the stern of the tugboat. There are dark shadows of what appear to be two men in hats on the wall on the right, three faces on the corrugated iron wall on the left and behind them an Oriental figure with spiky hair, dressed in a robe. On the wall to the left of the striped awning are two cows, one with the word ‘FAT’ painted over it, and so on. ‘I put all that in for fun,’ Kingman explained. ’If people take my work too seriously, I’m disappointed.’