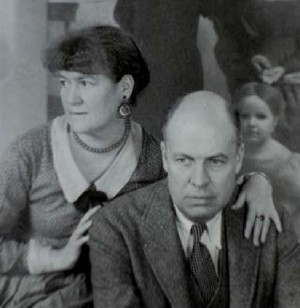 Edward Hopper (1882–1967) is regarded as one of the foremost American artists of the twentieth century. However, he didn’t sell his first painting, an oil entitled Sailing, until he was 31 years old. He had to wait a further ten years before he sold another. Hopper later recalled, ‘For many years after I left art school I had to do commercial drawing and illustrations to make any money at all. I couldn’t sell any paintings. Then came a time when I did sell paintings.’ It was Hopper’s watercolours that brought about this change of fortune, earning him both critical acclaim and commercial success.

Hopper painted his first serious watercolours in the summer of 1923, which he spent in Gloucester, Massachusetts, the country’s busiest seaport and a favourite haunt of artists. A well known painter of the time, John Sloan, gave up going to Gloucester because ‘There was an artist’s shadow beside every cow and the cows themselves are dying from eating paint rags.’ Hopper, however, ignored the popular painting sites around the harbour. ‘When everyone else would be painting ships and the waterfront,’ he said, ‘I’d just go around looking at houses.’

Also in Gloucester that summer was Jo Nivison, who had attended art school with Hopper. In addition to their mutual devotion to painting, they shared a love of French poetry, moviegoing and theatre. Hopper and Jo explored Gloucester together and Jo, an accomplished plein air painter, persuaded him to take up watercolour. Later that year when she was invited to submit paintings to the Brooklyn Museum’s annual watercolour exhibition, Jo recommended the work of her new friend, Edward Hopper, to the organisers. Hopper had six paintings accepted. 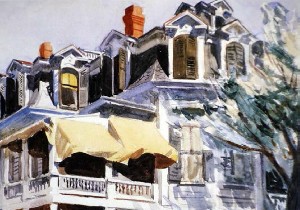 Helen Appleton Read, art critic for the Brooklyn Daily Eagle, hailed them as one of the high spots in the exhibition. Like Winslow Homer, she said, Hopper ‘believes in the authority of big simple forms over the effect attained by brilliant brushwork...What vitality and force and directness!’ Royal Cortissoz, another prominent critic, pronounced them ‘exhilarating,’ and a tribute to ‘what can be done with the homeliest subject if only one possesses the seeing eye.’ To top it off, the Brooklyn Museum purchased one of Hopper’s watercolours, The Mansard Roof, for its permanent collection. 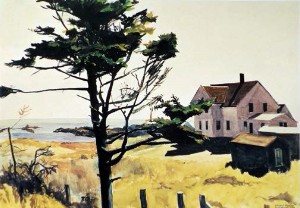 In 1924, shortly before his forty-second birthday, Hopper and Jo got married. Over the summer, which they again spent in Gloucester, Hopper produced a number of watercolours that he exhibited at his second one-man show. At his first, in January 1920, he hadn’t sold a single painting. This time, all 11 watercolours and five oil paintings sold, marking a major turning point in Hopper’s career. He disliked having to work as a commercial artist, ‘Illustration didn’t interest me,’ he said, ‘I was forced into it by an effort to make some money, that’s all.’ The success of his second one-man show - and his watercolours in particular - allowed Hopper to give up commercial illustration and devote himself entirely to painting. 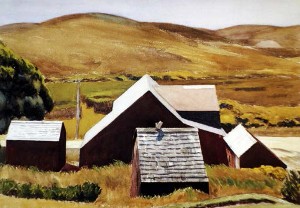 Recalling the time when he was forced to earn his living as an illustrator, Hopper said, ‘I was always interested in architecture, but the editors wanted people waving their arms. Maybe I am not very human. What I wanted to do was to paint sunshine on the side of a house.’ And houses were Hopper’s favourite watercolour subject along with, to a lesser extent, lighthouses and trawlers - he had at one time entertained the idea of a career as a naval architect. He painted only a handful of pure landscapes.


"Roofs of the Cobb Barn" 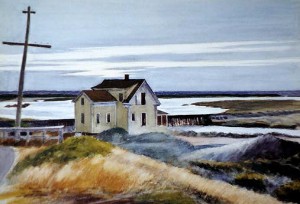 The Dodge also served as a studio when they painted on location. Jo would paint in the front, leaning her board against the steering wheel, while Hopper, who was six foot five inches tall, occupied the back seat. Hopper painted his watercolours on location over the summer, his oils during winter in the studio. For more than two decades, he was a prolific watercolourist. He regarded watercolour as an important medium in its own right, not as a means of producing studies for his oils.

In May 1946, Hopper and Jo drove via New Orleans to Mexico where they stayed for over a month. They then headed north to Wyoming. 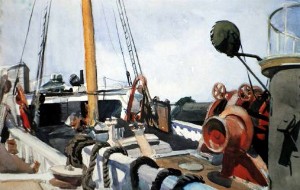 This trip effectively marked the end of Hopper’s career as a watercolourist; he was to paint only six more watercolours between then and his death in 1967.

When asked whether he had stopped painting watercolours because he preferred to work more slowly, Hopper replied, ‘I don’t think that’s the reason I do fewer watercolours.

I think it’s because watercolours are done from nature and I don’t work from nature any more. I find I get more of myself working in the studio. 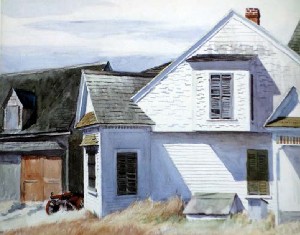 Getting more of himself was important to Hopper.

He wrote ‘Great art is the outward expression of an inner life in the artist, and this inner life will result in his personal vision of the world.’

He was fond of quoting the German writer, Goethe: “The beginning and the end of all literary activity is the reproduction of the world that surrounds me by means of the world that is in me, all things being grasped, related, recreated, moulded and constructed in a personal form, in an original manner.’ ‘For me,’ said Hopper, ‘this applies to painting fundamentally.’


"House on Pamet River"
'What I wanted to do was to paint sunshine on the side of a house.'


The paintings Hopper is famous for today are his oils depicting the essential loneliness of city life. The people who inhabit them are detached from their surroundings and have retreated into their own inner world. A friend of Hopper’s recalled that whenever he questioned him about his paintings he would always say, ‘It’s about me.’ 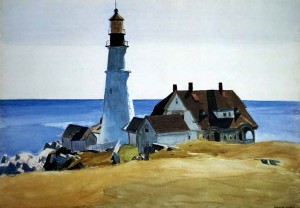 But Hopper’s watercolours, painted on location during his summer holidays, were the paintings that first brought him critical acclaim and commercial success. Why are they so memorable?

There is nothing fancy about them in terms of technique. Even his dealer noted that Hopper avoided clever brushwork or washes.

One part of the answer lies in the simplicity, strength and geometrical rigour of their composition, the other in his depiction of light. In his watercolours, Hopper was able to do what he said he always wanted to do: paint sunshine on the side of a house.