“You will see, in the future I will live by my watercolours.” 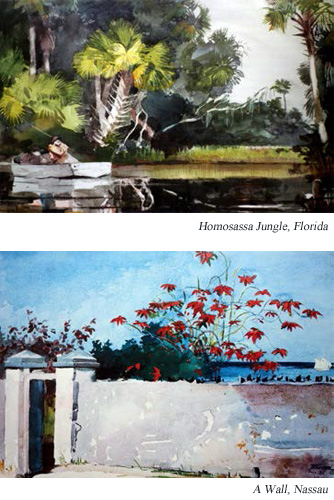 It was not until 1873 at the age of thirty seven that Winslow Homer took what a contemporary writer called “a sudden and desperate plunge into watercolour painting.” Homer was already one of America’s best known artists.

He had been elected a full member of the prestigious National Academy of Design and in 1867 had received widespread critical acclaim for his Civil War painting Prisoners from the Front. Although his early oil paintings sold well, they fetched prices of no more than a few hundred dollars. Consequently Homer was still
dependent on commercial illustration work which he detested, describing it as a “treadmill existence.” Ever the businessman, Homer realised that watercolours could be painted more quickly and sold at more affordable prices than oils. He hoped watercolour might provide a steady source of income that would release him from the drudgery
of commercial art.

Homer’s instinct was correct. The first watercolours he exhibited in 1874, a critic reported, “were snatched up at once, and the public cried for more.”

In the summer of 1873, Homer painted 30 watercolours in a two month stay at Gloucester, Massachusetts, a busy fishing port. These first watercolours mostly depicted local children at play. Between 1874 and 1878 during summer visits to the Adirondacks, rural New York and Virginia Homer produced a series of watercolours of children, young women, and idyllic scenes of country life. After the horrors of the American Civil War, scenes of childhood and rural life symbolised both a return to innocence and hope for the future. Such paintings were also eminently saleable.

In 1881, Homer set sail for England where he spent 20 months in the Northumberland fishing village of Cullercoats. There he worked almost exclusively in watercolour, painting local women at work.

He also abandoned the sentimental vision of his earlier works in the medium. As Helen A Cooper wrote, “Homer’s statuesque and powerful fisherwomen are the opposite of his earlier delicate young ladies of leisure...and even his decorative young shepherdesses and farm girls.” The weather depicted in the paintings is often stormy and foreshadows what was to become a major theme in Homer’s later oils: man against the elements. In keeping with the monumentality of his subject matter, Homer adopted a larger format - half sheets rather than the quarter sheets and smaller that he had used previously.

Before Cullercoats, Homer had lived some twenty years in New York City. When he returned, he moved to Prout’s Neck, an isolated rocky peninsular on the coast of Maine where his younger brother had built a cottage and his older brother had bought a big halfbuilt house which he completed as a summer home for his father and mother.

Homer moved a stable, which had been near the big house, closer to the sea and converted it into his home and studio. A confirmed bachelor, Homer valued his privacy, particularly when working. To discourage lady watercolourists who might be tempted to visit the famous artist, he posted a sign on the path to his studio: SNAKES! MICE! “I like my home more than ever as people thin out,” he wrote to his brother Charles. However, to another friend he wrote “I deny that I am a recluse as is generally understood by that term,
neither am I an unsociable hog.”

Homer took a fishing trip almost every year, to the Adirondacks or Quebec in summer and in winter, to Florida. It was on these working vacations that he painted most of his watercolours, working on hisoil paintings when he returned to the studio.

In 1884 Century Magazine commissioned Homer to illustrate an article on Nassau, which was becoming a popular tourist resort. Homer set off with his father, stayed in the best hotel in town and painted more than thirty watercolours during a two month stay. Most portray the local black population at work: men fishing or diving for conch, sponges or coral, women taking produce to market. “I think Bahamas the best place I have ever found,” Homer wrote. The paintings he produced there are notable for their strong saturated colour, a feature which subsequently became such a characteristic of Homer’s work in watercolour. He returned to the Bahamas in the winter of 1888- 1899 and spent the following two winters in Bermuda. Homer painted many of his best-known watercolours on these trips.

THE OUTDOORSMAN AND SPORTING ARTIST

Homer and his well-to-do older brother Charles were both avid fly fishermen and members of exclusive private hunting and fishing clubs in the Adirondacks and Quebec. In winter, Homer often vacationed in Florida. On these vacations, Homer combined fly fishing with painting watercolours of hunting and fishing scenes. His fellow anglers - wealthy bankers, industrialists, attorneys and judges - were among the most enthusiastic collectors of his work.

“If a man wants to be an artist,” Homer declared, “he should never look at pictures.” He was essentially self-taught and claimed to work “in utter independence of schools and masters.”

However Homer did read a great deal about the technical aspects of painting and discussed his ideas with other artists. Early in his career he obtained a copy of Chevreul’s Laws of Contrast of Colour which he referred to as his “Bible”. He told his friend John Beatty, “You can’t get along without a knowledge of the principles and rules governing the influence of one colour on another. A mechanic might as well try to get along without tools.”

He also stressed the importance of tone: “I have never tried to do anything but get the true relationship of values; that is, the values of dark and light and the values of colour. It is wonderful how much depends upon the relationship of black and white. Why, do you know, a black and white, if properly balanced, suggests colour. The construction, the balancing of the parts is everything.”

He was a staunch advocate of plein air painting: “I prefer every time a picture composed and painted out of doors...This making studies and then taking them home to use them is only half right. You get composition, but you lose freshness; you miss the subtle and to the artist, the finer characteristics, of the scene itself.”
Homer regarded himself as a realist. “Mr Homer, do you ever take the liberty, in painting nature, of modifying any part?” he was asked.
“Never! Never!” he replied. “When I have selected the thing carefully,
I paint it exactly as it appears.”

“The most popular of all American watercolorists - and the artist who has had the most profound influence on watercolor painting in America - has always been Winslow Homer...The artist began in the English watercolor tradition – subdued color applied in delicatewashes with discreet brushwork – but his vigorous, individual talent turned to the vibrant color, free brushwork, and bold spontaneous washes that have since dominated American watercolor painting,” says the blurb on the back cover of Winslow Homer Watercolors by American art writer Donelson F. Hoopes.

And indeed, Homer came to be regarded as the quintessential American artist of his era, much like his great admirer Andrew Wyeth in more recent times. It was inevitable that Homer should be compared to Sargent - the true-blue American artist versus the cosmopolitan expatriate. A number of critics decried what they saw as Sargent’s lack of depth and connectedness with American life and dismissed his virtuosity as showy and superficial in contrast to Homer’s solid American virtues.

One who voiced some reservations was the American photographer and gallery owner Alfred Stieglitz: “Hanging on the walls opposite [the Sargent watercolors] were the far-famed Winslow Homer’s. Truly watercolors. Direct. Well seen. Virile power. I was glad to see them again. They had their own life and yet in a deeper sense the Homers are nothing more than the highest type of Illustration.”

When asked if he did not agree that beauty is essentially abroad everywhere in nature, waiting to be seized by the artist, Homer replied “Yes, but the rare thing is to find a painter who knows a good
thing when he sees it! You must wait, patiently, until the exceptional, the wonderful effect or aspect comes.”