In July I entered a watercolour titled “Invercargill, City of Water and Light” in the ILT (Invercargill Licensing Trust) Art Awards 2018. The awards are a significant annual event run by the Southland Art Society and are open to artists, both local and nationwide, working in any medium.

There is a generous total prize money of $14,500 with the Supreme Award Winner receiving a prize of $6000. This year there were 76 entries from both established and emerging artists in a range of media including video, photography, painting and drawing. The judges were contemporary artist
Michael Armstrong from Timaru and topographer and book designer Ralph Lawrence from Dunedin.

When the winners were announced I was surprised to hear the judges had chosen my watercolour painting as the Supreme Award Winner commenting that although it is a small work it has “great punch” and is an obvious winner as it “caught our eye and dragged us across the room”. In second place was a video called “Leaving Traces Only” by Daegan Wells ($2,500), third place Andrea Sexton’s painting “Oraka Views” ($1000) and the Southland Resident Award went to James Morgan for his sculpture “Paikea” ($4,500).

I was inspired to create “Invercargill, City of Water and Light” after driving at night in the city. There was a celebration happening so the streets were alive with coloured lights in addition to the usual traffic and street lights. As we drove I took photographs through the windscreen. Rain caused the imagery to become distorted creating interesting shapes and colours. Back home in Manapouri I had a variety of photographs to develop into a painting. 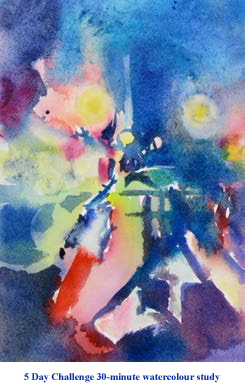 Around this time I was hitting a creative block so decided to join Watercolour New Zealand looking for inspiration. On the front cover of the first newsletter I received was a painting by Peter Coates called “The Lagoon, Wellington, by Night”, a bold, colourful abstract. I was immediately struck by the free and expressive colour and brushwork. I liked the suggestive rather than literal
interpretation of the subject.

In July I took part in the Watercolour New Zealand Five Day Challenge. Participants were required to spend 30 minutes each daypainting a watercolour, then post the image on the society’s Instagram
page. This was a good motivator. The time limit made me work intuitively and decisively. On day three I produced a painted sketch based on my night photos.

This gave me confidence andfreedom to tackle a larger, more detailed work. I used my photographs as a starting point but once I had a few layers down I began working more freely and the painting became my main focus rather than the photos. I threw salt onto successive layers of colour to create a random textured effect. Throughout the process I kept checking that I was pushing the light and dark areas to the extreme in order to achieve a high contrast between the bright city lights and the dark night sky. 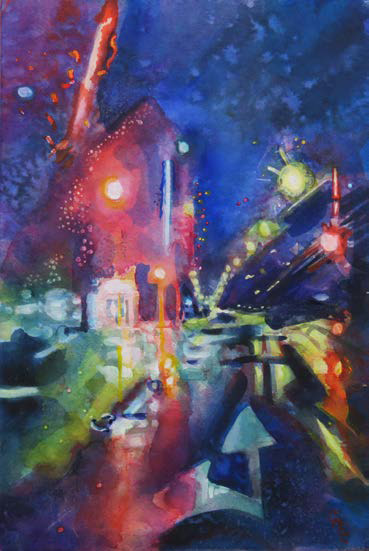 Since winning this award I have been in touch with Peter Coates and Sue Wild at Watercolour New Zealand to thank them for inspiring me to create my award-winning watercolour.

Talking by phone with Peter Coates has opened up possibilities of how to take my watercolour further. I am looking forward to seeing how far I can push this exciting medium.

Comment from Peter Coates:
“Much of our art is conservative, often driven by the artist’s need for an income. But in New Zealand we have diversity. We need to break free, be adventurous and explore.”

Catriona is an artist working mainly in watercolour & acrylics. She tutors adult education art classes during the winter months in Te Anau and lives on a farm near Manapouri, Southland with her husband and two children.