An interview with Mary-Annette Hay 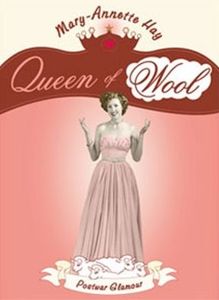 Mary-Annette Hay is perhaps best known as the ‘Queen of Wool’ but she’s also a watercolourist of note. John Toft interviewed her at her Waikanae home.

‘The reason I’m crazy about watercolour,’ says Mary-Annette Hay, ‘is that watercolour has a mind of its own so you need to get on pretty well together because sometimes the watercolour absolutely takes over and then you have a journey together and you have this mixture of colours which possibly you never intended to put together. To me that’s the absolutely fascinating thing about watercolour, so if you ask how did I get this or that effect, to tell you the truth I simply don’t know and I’ve never known.’

Mary-Annette left the strict walls of Marsden School to attend the art school attached to Wellington Technical College where, by contrast, ‘we had this wonderful freedom.’ She pays tribute to ‘that remarkable man, F. V. Ellis. What he taught us I will never, ever forget.’ Another teacher was watercolourist Nugent Welch, nick-named ‘Daddy Long Legs” by his students. ‘Those teachers were marvellous. It was a wonderful, wonderful art school. We were taught all the essential things, but the freedom was terrific.’

It was here also that Mary-Annette pursued her interest in theatre, taking lead roles in a number of major productions. She put this experience to good use in her later promotional work for the wool industry – ‘I promoted wool as theatre.’

She became known as “The Queen of Wool” as a result of this work which was celebrated in an exhibition at Te Papa and a memorable interview with Kim Hill on National Radio.

For Mary-Annette, all the world’s a stage. ‘I see things as stories, as dramas. The reason I really love painting and particularly painting in watercolour is I love the drama of it and I’d like to feel that some of my paintings have quite a bit of drama in them.’ She credits Julia Van Helden, ‘a supreme artist, sadly not well-known,’ with drawing her attention to the parallels between painting and theatre.

Her paintings are ‘part of my way of trying to impose what I feel about New Zealand and the whole watery drama of New Zealand. To me, New Zealand is watercolour.’ So it’s not surprising that Mary-Annette is a confirmed plein air painter: ‘I never paint from photographs. I’m usually outside, extremely uncomfortable, or else sitting in my little car endeavouring to capture it through my car window.’ She tries to convey feeling and movement in her work. ‘My claim is that it’s very difficult to get that movement unless you’re looking at it.’ Mary-Annette fell in love with the South Island during her travels around New Zealand in the course of her promotional work for the Wool Board. Most of her paintings were done while travelling around the country with her late husband, Donald.

As Mary-Annette tells it, they would be driving along when she would suddenly exclaim, ‘Donald, stop. Just stop!’ Mary-Annette would work away while Donald would go for a walk or read. ‘So many of my girlfriends, painters, would say that they hadn’t got their husbands nearly so well trained!’

Working under these circumstances meant that Mary-Annette developed a fast and loose style of painting. As she describes it, ‘A sort of enchantment comes over me and I work very quickly. I try not to fiddle or rework it. Sometimes I go in with a dark instrument, a pencil or whatever comes to hand, and work out a pattern in it but as a general rule I seem to think well that’s that and for better or worse that’s where it sits.’

Mary-Annette paints for the sheer love of it. She reflects, ‘Perhaps I’m fortunate in that I haven’t actually earned my living selling paintings because I possibly wouldn’t sell many although I’m very touched when somebody buys one. I hope that that’s what they liked about it, that in it they could sense my excitement over the drama of the subject.’

She has a single piece of advice for aspiring painters: “Fall in love with your subject. You’ve got to pass on what you feel.’ 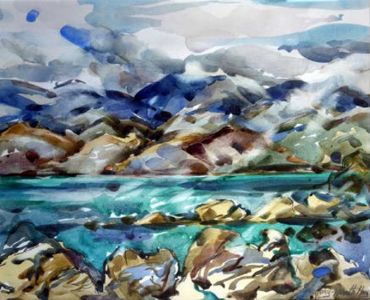 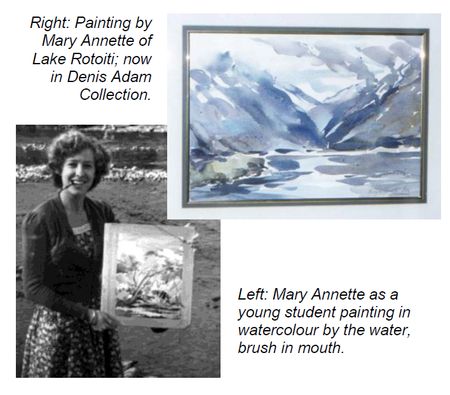 After practicing art all her life Mary-Annette Hay recalls:

I have had a lifetime involvement in the visual and performing arts as an actress, public speaker, promoter and artist. So I think I can bundle all this activity together, for to me they are all closely related.
I see drama in the scenes I paint, the dark and the light tones and the brilliant colours of the New Zealand landscape which is my passion; and to all this I add movement. Hence I sit outside often in great discomfort to try and catch the beauty before it changes, which it does of course, all the time.

I was trained at the Wellington Art School attached to the Technical College. It was a very fortunate time; a time of F. V. Ellis who was also a pianist, so he talked to us in musical terms, and Nugent Welsh who took us outside to paint in watercolours. Nugent was wonderful; he didn't talk much, he simply took over our brushes and paper, so we went home with a Nugent Welsh masterpiece! We called him Daddy long legs, he was so tall.

It was difficult to earn a living in those days, even with the good training we'd had. But through other activities and the teaching I'd received, I eventually became Director of Wool Promotion for the Wool Industry. In 2007, Te Papa Museum of New Zealand mounted an exhibition and a film on my career entitled, `The Queen of Wool'. It depicted and explained how as a young woman, the unique form of wool promotion I had devised.

Now after a lifetime of activity in the creative arts, I'm still involved with the New Zealand Portrait Gallery which now has a permanent home at Shed 11 on the Wellington waterfront. The current exhibition there features two portraits, not by me, but of me originating back to those Art School years. The portraits are by Leonard Mitchell who was a student and teacher at the same time. One portrait is unfinished. Why? Well thereby hangs a tale!