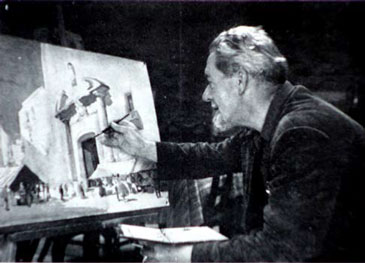 In his book Light and Atmosphere in Watercolour Trevor Chamberlain wrote of his early years ‘My watercolour heroes were Jack Merriott (1901-68) and George Ayling (1887-1960). They were both traditional watercolourists and used the medium in a very fluid, wet way – something which I would have wished to achieve in my own watercolour paintings. Both were well-known in their day, but they are sadly overlooked and forgotten now.’ Although he never met him, Chamberlain said Merriott made a major contribution to his development as a watercolour painter.

Jack Merriott was born in London in 1901. He started his working life as a shipping clerk in an office near London Bridge. Merriott spent all his leisure time painting and had several paintings exhibited in the Royal Academy. According to his friend Ernest Savage, he was often caught sketching the shipping on the Thames during office hours on the backs of old invoices.

At the age of 28, Merriott decided to cut loose from routine work and become a professional painter. Along with other leading watercolourists of the day, he was commissioned to design posters for British Railways – which was where Trevor Chamberlain first saw his work – and the General Post Office. His illustrations often appeared in the Sphere magazine and he produced many watercolours for Beautiful Britain, a series of books published by Blackie.

In addition to his work as a commercial artist, Merriott was active as a fine artist and teacher. Vice President of the Royal Institute of Painters in Watercolour and a regular contributor to the English magazine The Artist, he travelled throughout Britain giving demonstrations of watercolour painting, made instructional movies and hosted painting holidays in Britain and abroad. He also devised a correspondence course on watercolour painting for the Pitman College of Art. A versatile artist, Merriott was a member of the Royal Institute of Painters in Oil Colour, the Royal Society of Marine Artists and the Pastel Society. But his first love was always watercolour. ‘Watercolour has never been accorded the same degree of importance as oil painting,’ he wrote, ‘yet to my mind, in many ways the beauties of watercolour surpass those of oils.’


MERRIOTT AS A TEACHER

Jack Merriott was regarded as one of the best teachers of watercolour painting of his time. After his death at the relatively early age of 67 as a result of injuries sustained in a car accident, Merriott’s friend Ernest Savage turned his Pitman correspondence course into a book, Discovering Watercolour. In this book, Merriott outlined his two approaches to watercolour painting. The first he called the direct method and second, the controlled wash.

This involved starting with a direct attack on the centre of interest of the painting on a dry sheet of paper. ‘I employ this method,’ he wrote, ‘when I am emotionally excited and some particular feature or effect in the landscape has so fired my enthusiasm that I am impatient to record at once the essence of the scene before it changes. Perhaps a church tower in the middle distance is thrown into strong relief by a passing cloud, or a mountain is partially obscured by a heavy rain shower; a sailing boat approaches the entrance to the harbour, against the sun, its deck and gunwale a dazzling silver; or some other fleeting effect of beauty occurs. In these circumstances I must get down quickly the special feature or centre of interest. The main difficulty in this is judging the correct depth of the tone values. Being painted straight on to the white paper, they appear darker than they should.’

Merriott recommended that paintings executed using the direct method be painted very quickly to capture the brief natural effects they portrayed. He advocated using this method when the atmosphere was damp and it was difficult to get washes to dry.

Merriott’s other approach to watercolour involved what he called the controlled wash: ‘A very wet wash of colour is applied to the whole sheet, varying in tint and depth according to the scene before me. While this is very wet, colours may be altered, tones deepened by the addition of colour, or reduced by lifting with a semi-damp brush. The first broad wash can be controlled quite a lot in this way, and forms stressed by adding or reducing tone, or by line drawing here and there with a pointed No. 5 brush. When a generally misty idea of
the scene is achieved, this is then allowed to dry. Finally, forms are brought out where required by direct blots of pure colour and a strong detail here and there. It will be seen that by this means much of our picture is painted in one wash only, and at the most with only two or three applications in parts. The result is an appearance of cleanliness, purity and spontaneity.’

Merriott emphasised the importance of tone in producing a successful picture. He maintained that the vast majority of paintings he was called upon to criticise suffered from lack of true appreciation of tonal relationships. To overcome this problem he advised: ‘Half close your eyes and compare the main masses in the landscape and if you get these right you will be more than halfway there. Slight modifications may be made afterwards if necessary, provided they do not interfere with the main mass of tone. But from the commencement of the painting you should decide definitely which is your lightest light and darkest dark, and make a note on your sketch, or on a separate sheet of paper, of the actual tones and colours you propose to use to represent these. All other tones can then be related to them.’

In addition he stressed the importance of good design and would frequently turn a painting upside-down to judge this quality. Merriott felt that spontaneity and simplicity were important qualities to be cultivated in watercolour painting. Retaining a clean, fresh look, he taught, is a matter of avoiding the application of too many wash layers. When applying additional washes, the underwash must either be quite wet (controlled wash method), or quite dry. The halfway mark is always dangerous.

Merriott regarded style as an unconscious attribute, a personal or individual characteristic like character in handwriting, by which the experienced artist can always be recognised. He maintained that style comes unsought to the sincere painter.

Merriott advised the aspiring watercolourist to study the work of the great painters of the past and present and to become acquainted with the many styles of painting in watercolour – broad, loose, tight, decorative, and the different approaches – abstract, surrealist, symbolic, impressionist, and so on. He emphasised that the style of painting that an individual favoured was purely a matter of personal choice – he himself was attracted to impressionism - but that each had its particular interest and we should be able to enjoy them all: ‘After familiarising ourselves with the work of the old watercolourists and those of the present day, we naturally form a preference for a particular style or idiom. It is not for us to imitate such work – rather should we learn by it and set our course along the road that attracts us, deviating where we think fit and, by bold experiment and research, making our personal contribution and carrying the tradition a stage further.’