PAINTER OF THE ENGLISH COUNTRYSIDE

It’s ironic that Rowland Hilder who is thought of as the quintessential painter of the English countryside was born in Long Island, New York. His parents were British and in 1915 his father returned to England to volunteer for the army. The family sailed to Britain on board the Lusitania. It was her last voyage before she was sunk by
a German U-boat.

Hilder’s time at school in England was not a happy one. A tall, gangling boy, he was put into a higher class than other boys of his age ‘because of my size, not my intellect,’ he later observed. That he spoke with a broad American accent made it difficult for him to be accepted by his classmates and teachers alike. Hilder couldn’t spell, so spent most of his time drawing pictures. His only encouragement came from the art master who was impressed by his talent and persuaded his parents that Hilder should take up art as a career.

At the age of 16 Hilder was admitted to Goldsmith’s College of Art, a school with an established reputation for fine draughtsmanship. He was initially placed in the etching class but couldn’t stand the smell of the acid so switched to illustration. Here he came under the influence of a remarkable teacher, Edmund Sullivan. ‘He had a knack of unmasking your great and secret aspirations,’ Hilder recalled. Sullivan encouraged his students to sketch constantly with a view to mastering composition and design and making their pictures tell a story. He also exposed his students to the work of the great draughtsmen of the past. Of these it was Durer who made the
greatest impression on the young Hilder, along with contemporary artists Muirhead Bone and Frank Brangwyn.


FROM SEASCAPES TO LANDSCAPES 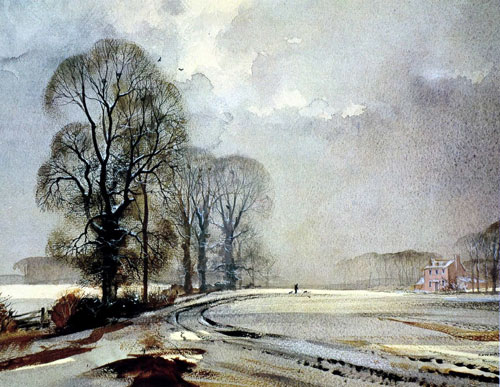 At this stage of his life Hilder was determined to become a marine painter and spent every moment
he could on the waterfront, drawing boats. He won a travelling scholarship, sponsored by Cadburys, and used the prize money to go to the Netherlands to study the work of the great Dutch marine painters. At
the age of 18, Hilder exhibited at the Royal Academy.

His large drawing of a cable ship was bought by two Royal Academicians, William Orpen and Arnesby Brown, on behalf of the National Gallery of Australia. While still attending Goldsmiths, Hilder was commissioned to illustrate books of sea stories, first for Blackies then for Jonathan Cape. The directors of Jonathan Cape asked Hilder if he would be willing to switch his attention from seascapes to landscapes for illustrated editions of books by Mary Webb, an author who had achieved considerable fame for her novel Precious Bane. They arranged for Hilder to stay in Mary Webb’s cottage in the Shropshire countryside to get a feel for the countryside in which the novels were set. His stay took place in winter and Hilder was struck by the beauty of the landscape with its tall leafless elms.

Next, Shell Oil commissioned Hilder to produce a series of advertisements portraying the beauty of the English countryside in winter. In those days - the 1930s - it was usual for motorists to garage their cars over winter. World’s Press News wrote, ‘Selling the winter countryside in this way is a sure way of selling more petrol... there are still thousands of owner-drivers in this country who are susceptible to these suggestions conveyed in Rowland Hilder’s finely realistic drawings.’

Jonathan Cape had sold the rights for some of the Precious Bane drawings to the Medici Gallery, who coloured the designs and marketed them as Christmas cards. Though Hilder did not hold the copyright for these commissioned works, Medici had contravened a little-known law forbidding alteration to a work without the artist’s permission. Instead of paying compensation, they contracted Hilder to design Christmas cards for them. Hilder’s name and his winter landscapes became widely known as a result of his commercial illustrations, setting the pattern of his professional life for many years.

In fact, these motifs were to become Hilder’s trademark: scenes of the countryside in winter with big skies, leafless trees, ploughed fields and farm buildings or oast houses, the conical buildings in which hops were dried in kilns. Such scenes came to be known as ‘Hilderscapes.’ Sir Hugh Casson, Former President of the Royal Academy, wrote ‘His style and technique are so recognisable that there are parts of England which – in tribute to his skill – seem to have grown physically to look like his paintings.’

By the mid-1930s Rowland Hilder had become the popular artist of the time in England, a household name whose cards were on every mantelpiece.

During the Second World War, Hilder was principally employed to produce propaganda posters. The War over, he returned to commercial art. A notable undertaking in the 1950s was the Shell Guide to Flowers of the Countryside on which he collaborated with his wife Edith. Hilder designed the advertisements and painted the backgrounds; his wife painted the flowers. At the time, the twelve paintings had the widest exposure of any coloured advertisements, estimated at 10 million per month. They were later reproduced as wall charts for schools and published in book form.

By the 1960s, Hilder’s career as a commercial illustrator was virtually over. Despite his enormous success, he maintained that he didn’t think he was any good as a commercial artist. All he had ever wanted to do was paint traditional landscapes and seascapes. Henceforth he was to dedicate himself to fine art, although many of his paintings were to be reproduced as prints.

First and foremost a watercolourist, Hilder had been elected to the Royal Institute of Watercolour Painters in 1935 and served as its President from 1964 to 1974. Of his preferred medium, he wrote ‘Watercolour is a responsive, sensitive medium; it excels as a means of capturing and conveying the inspiration of the moment. By its nature it is ideally suited to combine the techniques of both drawing and painting in tone and colour. If style can be defined as economy of means, then watercolour is better suited than any other medium to convey the feelings evoked by the moods of nature, responding in capable hands to the changing seasons and the fleeting beauties of the weather.’

Hilder was a master of using glazes to capture the mood and atmosphere of a landscape. ‘I use many thin watercolour washes to obtain subtle variations in value and colour,’ he wrote. He maintained
that good watercolours result from knowing what to leave out of a
painting rather than how much to put in.


ADVICE TO THE ASPIRING WATERCOLOURIST

Hilder concluded his book Starting with Watercolour by outlining some guiding principles for the aspiring watercolourist. The first was to keep a fair sized, flat, open area in your picture as a restful space. This will set off and add significance to the other parts of the picture.

You should also aim to paint in simple, flat areas of wash, using correct tone rather than fussy, niggling detail to convey a feeling of conviction. He advocated trying to capture a mood rather than becoming involved in slavish copying of what is before you. The aim should be to work a spell on the viewer, to stir his feelings and to do this in the simplest and most direct way possible.

‘Once again,’ Hilder wrote in conclusion, ‘keep your washes clean, simple and flat. This will help you to strive towards the development of a sense of the pattern and relationship of shapes. Try to see the elements of your picture as a series of shapes and contrasting tones that will convey the essence of your message in clear, easily read and understood terms.

Aim to gain enough confidence to be able to paint directly, and then leave your picture alone. Remember that the watercolour medium can be very beautiful in itself... Finally, do not let painting become a dreary chore. It can and should be the most absorbing, exciting and rewarding activity yet devised.’


THE JOY OF PAINTING

‘Painting,’ John Constable wrote in a letter to a friend, ‘is but another word for feeling.’ Hilder put it this way, ‘I have spent over fifty years painting the land, the sea and the sky and I still feel pure and simple exhilaration with each new painting I begin.’