During the last two decades of the nineteenth century a group of young painters based in Glasgow developed an international reputation for their work. The so-called Glasgow Boys’ taste for naturalistic subject matter and strong, vibrant colour was in stark contrast to the academic style favoured by the Royal Scottish Academy, based in Edinburgh. Glasgow became associated with the latest advances in painting, architecture and the decorative arts.

Two of the Glasgow Boys, Arthur Melville and Joseph Crawhall, were watercolourists of note. Both were highly individualistic in their approach.

Melville developed a technique all of his own, described by Martin Hardie in Watercolour Painting in Britain: 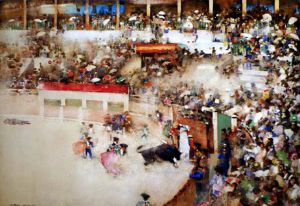 ‘Melville’s method was pure water-colour, but water-colour applied on a specially prepared paper. This paper was soaked in diluted Chinese White, till it was literally saturated and impregnated with white. He worked often into a wet surface, sponging out superfluous detail, running in those warm browns and rich blues and reds which he knew so well how to blend and simplify.

His colour was often dropped on the paper in rich, full spots or blobs rather than applied with any definite brush-marks. The colour floats in little pools, with the white of the ground softening each touch.


"The Little Bullfight" by Arthur Melville

He was the most exact of craftsmen; his work is not haphazard or accidental, as might be rashly thought. Those blots in his drawings, which seem meaningless, disorderly and chaotic, are actually organised with the utmost care to lead the way to the foreseen result.

Often he would put a glass over his picture and try the effect of spots of different colour on the glass before applying them to the surface of his paper. Melville knew his job as a water-colour painter and had an intuitive skill for using vital and scintillating spots of colour to express the dominating accents of scene or incident. As Sir James Caw has said: “He made out objects more by what surrounds them than by rendering constructive form.” ’

Strongly influenced by Orientalism, Melville liked to paint crowd scenes in exotic locations. He travelled extensively in the Middle East, North Africa and the Mediterranean in search of the exotic and colourful subject matter which, together with his “blottesque” technique, became his trade mark. En route from Babylon to Constantinople, Melville was twice attacked by bandits. He escaped the first time but the second time
he was robbed, stripped and left for dead in the desert. 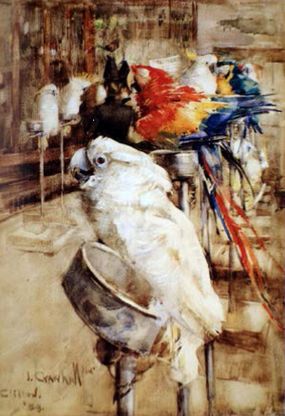 Joseph Crawhall was a remarkable artist. He was taught by his father, who insisted that he draw exclusively from memory. Reserved and introspective, he rarely spoke unless he had something to say. A friend nicknamed him “The Great Silence.” His other friends knew him affectionately as “Creeps.”

Crawhall was probably more at ease with animals than with people. Birds and animals were his favourite subject matter. His intimate friend Sir John Lavery recalled: “In a few lines he could sketch an animal making it more recognisable than the most candid camera could do - and from memory. If he did a pack of hounds, the huntsman would be able to recognise every single one, even when it was only indicated in half a dozen marks on the linen or paper he happened to be working on.”

The Aviary, Clifton is a brilliant example of Crawhall’s remarkable ability to paint from memory.

The influence of the Glasgow Boys extended as far as New Zealand. James McLachlan Nairn, founder of the Wellington Art Club and leader of the Pumpkin Cottage group of artists was a prominent member of the group until he set off for New Zealand in 1889 to convalesce from tuberculosis.


"The Aviary, Clifton" by Joseph Crawhall


Nairn was highly influential in the Wellington art scene until he too died at the early age of forty-four after catching a serious cold while painting outdoors near Motueka.