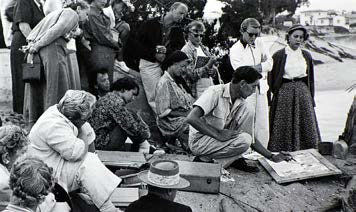 “I think that the first split-second reaction, that first wonderful visual image, is the thing one must try to project on paper, not the very literal and painstaking eyeful”

George Post was born George Booth Root III at his grandfather’s house in Oakland, California. His parents divorced soon after he was born – Post didn’t meet his father until he was in his early thirties. He lived in Oakland with his grandfather until he was seven, then went to live with his mother and sisters in Gold Hill, Nevada, a mining town where his stepfather, Walter Post, was superintendant of the Yellow Jacket
Mine. During the four years he spent in Gold Hill he changed his surname to Post.

In 1919 the family moved to San Francisco and then two years later to Oakland. Post’s high school art teacher recognised his talent and submitted his work to the California School of Fine Arts in San Francisco,where he was awarded a scholarship. In 1927, after two and a half years at art school, Post had to leave and go to work.

He told an interviewer “So my brother was working in the C&H Sugar Refinery so I went up there for a year and had a good taste of freedom. I mean, not freedom but independence, I guess, in making my own living. One day I decided that I hadn’t gone to art school for two and one half years for nothing, and I ought to get out and start doing something in art because I was getting a little satisfied with the routine of the sugar factory. Anyway, I quit the next day, which was kind of a hard thing to do in those days – this
must have been around the late Twenties... I came back to San Francisco and started looking for art work, which is always difficult, but I found some newspaper advertisements, furniture, pen and ink illustrations, to do for a little furniture store out in the Mission district in San Francisco and it was a start. From that it led to one thing and another and I sort of got into the commercial art field for a
while. Then the Depression came, badly, and I had to go to sea. I got a job on an oil tanker to New York and did some watercolours on my hours off. When I came back to San Francisco...I showed them at the East-West Gallery...Well anyway, they seemed to take off very instantly and in the next year or so, I became quite well known as a watercolour painter.”

Post’s reputation resulted in him being put on the WPA, a Depression era New Deal relief work scheme. As he described it, “I had to report to the office with an armload of watercolours once every two weeks...I didn’t have a car or automobile in those days. I’d go hitchhike or go by Greyhound bus and I went all over the state. It wasa most wonderful experience to have so much freedom and to be getting $90 per month, which was a fortune in those days because we were all getting along on so little money. It was a wonderful start and I was never happier, I don’t think, than in those days when I could just go roaming all over the country and just do watercolours.

It was a good start and I learned an awful lot by having so much time and freedom to just paint.” The paintings Post produced were framed and hung in public buildings such as schools and
libraries.


In the year and a half he spent on the WPA, Post managed to save seven hundred dollars. He used the money to go to Mexico for four months and from there caught a boat to Hamburg. He spent time in Germany, Yugoslavia, Italy, France and Belgium returning to San Francisco thirteen months later, in October 1938, with fifty of the seven hundred dollars he had started with still in his pocket.

The paintings and sketches Post did on his European travels proved popular – he sold almost everything
he produced on the trip. He had been inspired to paint watercolours after visiting an exhibition by a well known San Francisco artist Stanley Wood in 1929. At art school there was no instruction on watercolour painting – it was regarded as a medium for doing quick sketches in the field which would be translated into oil paintings back in the studio. The time he spent on the WPA enabled Post to get to grips with watercolour. He told an interviewer “Somehow oil never suited me. It’s so that I have just kept to watercolour all through these years and become, of course, quite adept with it, and created a definite style that seems to be my own like you naturally would do if you had stuck to a medium as long as I have. I’ve tried oil and I find it very exciting and a fine medium, but not for me.

It just doesn’t seem to suit my temperament. I like so much to do things quick and fast and with such spontaneity that I can’t seem to pull it off in the medium of oil.” Another reason Post was drawn to watercolour was that he loved to paint outdoors, regardless of the weather. He reduced his equipment to a minimum, never using an easel: “I’ve always just put the board right on the ground where it is flat and not too vertical, almost flat, then worked from a tiny stool. It is only quite recently that I have resorted to a little stool because all these years I’ve just squatted in front of the board and worked from my knee, well not on my knees but just squatting.” He worked quickly, completing a painting in about an hour.

Post described his approach in the following terms: “I like to get an impression of what I’m doing and then sort of clamp it in my mind, interpret it in a way in my mind that I first felt it as an impression, and not to be too literal, but to identify it and relate it to the vicinity and the place that it is, and then to interpret it in a quick, fast way and simplify it by leaving out a lot of unnecessary things that are there that you don’t need, so you use the parts that really make it work rather than all the unessential areas.”

He stressed the importance of simplicity: “The thing that makes any painting interesting and worth looking at is the simplicity with which you do it, without cluttering it up with too much stuff.” He explained how he went about achieving this in deciding on the composition of his paintings: “There are an awful lot of things that you look at with your eyes that are superfluous sometimes in a composition, as a painting. So I think that you have to judge which area of the thing you’re looking at is the part that will make the most interesting and exciting part of a composition. Then there are other areas that are unnecessary or superfluous that you don’t need, so you have to be aware, I think, of what to leave out and what to put
in. And some areas you would – I would, at least – emphasise more, exaggerate them more than they actually are, and others diminish them, still keep them maybe in the painting, and then still others to
completely obliterate.”

After World War II, when Post worked as a cargo stowage planner for the Liberty and Victory ships transporting military supplies to the Pacific, he was asked to teach at the California College of Arts and Crafts in Oakland. Initially reluctant – he had taught painting classes before and not particularly enjoyed the experience – Post agreed on the condition that he taught only two days a week and could take his classes outside to paint on location. This time he really enjoyed the experience, so much so that he continued to teach there for more than twenty years. As well as conducting numerous watercolour workshops throughout America he also taught for many years at the Rex Brandt Summer School of painting in California and the T. H. Hewitt Watercolour Workshops, which took place at various locations throughout the world.

Post taught that “painting should be quickly and easily tied together and accented with the individual shorthand symbols of the artist’s own particular calligraphy.” His watercolours are in many important American collections, including the Metropolitan Museum of Art, the Fine Arts Museum of San Francisco, the Oakland Museum, the San Diego Museum, the Santa Barbara Museum of Art and the Smithsonian American Art Museum. His individualistic almost quirky style of painting was sufficiently modern to please the progressives but also appealed to more conservative tastes.

Asked by an interviewer to describe the major influence that enabled him to develop as an artist Post replied “I think it was just the joy of going everywhere and not staying in just one spot all the time, and recording visually the things that I found compelling and interesting, and I felt I had to record them in some way. I wasn’t a writer, so I couldn’t write about them, nor a poet, so I sketched them and painted them. I think that’s the only influence... Yes, that was the influence. And the urge, the urge to do it, to record it.”