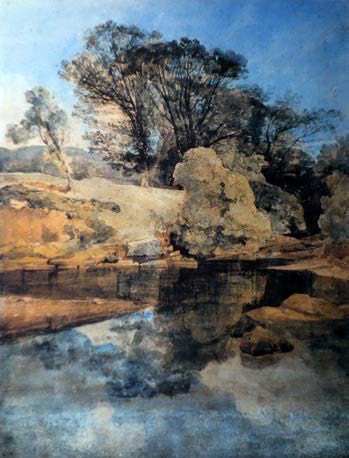 A Pool on the River Greta near Rokeby

Many artists will know ‘Cotman’ as the brand name of Winsor & Newton’s student grade watercolours but perhaps know little about the artist after whom they were named.

John Sell Cotman was born in Norwich in 1782. Like Turner, he was the son of a barber. When John Opie, a celebrated portrait painter of the time, visited Norwich Cotman’s father sought his opinion about his son’s prospects. Opie’s verdict was blunt: “Let him rather black boots than follow the profession of an artist.” Undeterred, at the age of 16, Cotman set off for London, “to learn to be a painter.”

In London he found work colouring aquatints but, as his son later put it, “not being treated as he fancied he ought,” he left the following year. Cotman was fortunate to be noticed by Dr Thomas Monro, a prominent physician - he treated the madness of King George. Monro was a keen amateur artist whose extensive art collection included works by most of the leading artists of the later eighteenth century; he also knew everybody who was anybody in the art world of the time. Dr Monro had the idea of gathering young artists together at his house in the evenings where they would copy works from his collection. He provided the materials, gave them supper and paid the artists the equivalent of a full day’s wages for a labourer for their evening’s work.

For Cotman, who had not received any formal tuition, the opportunity to study and to copy paintings by the foremost artists of the era was a godsend. 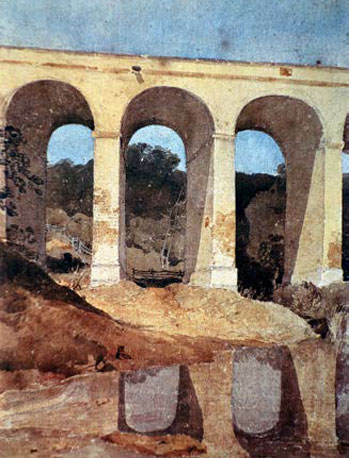 In 1800, at the age of 18, he exhibited six works at the Royal Academy and the same year was awarded ‘the larger Silver Palette’ by the Society of Arts, a prize which had been won by Turner seven years earlier.

For the next two years, Cotman, who lived in Soho, supported himself by making drawings for sale by local art dealers. In June 1800 he set off on his first painting tour, travelling through Wales, where he painted in the company of Thomas Girtin. At this stage of his career, Cotman was strongly influenced by Girtin, using a grey monochrome under-painting with suggestions of local colour. From 1802 to 1804 he painted with John Varley, a forceful character four years Cotman’s senior, who was a both a born teacher and an artist of repute. Martin Hardie in Water-colour Painting in Britain wrote “Cotman was no imitator of Varley, but it seems reasonable to accept that from Varley he absorbed that use of pure colour, laid in clean flat washes - a complete alteration from his previous technique - which he was to adapt so individually to his own purpose.”

In 1802, Cotman had the good fortune to find a patron, Francis Cholmeley of Brandsby Hall, 15 miles north of York. Cotman spent the next three summers at his house giving lessons to Mrs Cholmeley and her four daughters and exploring the surrounding countryside. His biographer, Sydney Kitson, described this period as the three most impressionable years of his life. Cotman himself said it was the time of the real inspiration for the full development of his art. He was never again to reach the same heights. During these three summers that he produced his most famous watercolours including Greta Bridge, Chirk Aqueduct and The Drop Gate in Duncombe Park.

In 1805 the Society of Painters in Water-Colours held its inaugural exhibition, the first in the world devoted exclusively to watercolour. The following year, Cotman was turned down for membership and decided to return to his hometown, Norwich. Once there, he immediately opened a solo exhibition of over 400 works and started a School for Painting in Watercolours and Design, charging higher tuition fees than the other established art schools in the area. Neither of these two undertakings met with much success. However, he did have better luck with a circulating collection of paintings and drawings which were lent out to subscribers.

Cotman was elected president of the Norwich Society of Artists in 1811 but his efforts to sell his work were largely unsuccessful. Towards the end of the first decade of the 19th century, Cotman’s focus shifted from landscape to architectural subjects and from watercolour painting to etching. Perhaps he hoped printmaking would prove more lucrative than painting.

In 1812, Cotman moved from Norwich to Yarmouth on the Norfolk coast at the request of his patron, Dawson Turner, a wealthy Yarmouth banker. For a salary of 200 pounds a year he was engaged to tutor Turner’s wife and daughters two days a week. The rest of the time he spent drawing examples of the Norman and Gothic buildings of Norfolk – Dawson Turner was a prominent member of the Society of Antiquaries. These drawings formed the basis for a book of etchings entitled Norfolk Architectural Antiquities.

After the defeat of Napoleon at Waterloo in 1815, Englishmen could again travel to France. In 1817 Dawson Turner sent Cotman off to Normandy to make drawings of Romanesque architecture for comparison with similar structures in Norfolk. Cotman made two further voyages to Normandy, in 1818 and 1820. Drawings selected by Dawson Turner were to be reproduced as etchings in a book to be entitled Architectural Antiquities of Normandy. So the central chapter of Cotman’s career was played out as a draughtsman of architectural subjects and a printmaker. He did paint some watercolours of Normandy, most of them produced after the publication of his book of etchings. For these paintings he adopted a more colourful palette, perhaps in an attempt to emulate J.M.W. Turner.

The strain of his journeys to Normandy and the stress of preparing his book of etchings for publication coupled with constant money worries led to Cotman suffering bouts of severe depression which plagued him for the rest of his life. On one occasion he received a visit from his old friend John Varley, who was informed by a servant that her master was very ill and going to die. Varley demanded to see the invalid: “Why Cotman, you’re not such a fool as to think you’re going to die! Impossible! No such thing! I tell you there are twenty years for you still to come.” Varley, known as ‘Vates’ (Latin for ‘prophet’ or ‘seer’) or ‘the Astrologer’ had predicted the deaths of two fellow artists, Paul Mulready and William Collins, with uncanny accuracy. Cotman was to live for a further nineteen years and three months.

In 1823 Cotman returned to Norwich where he took up painting again. In 1825 he was elected an Associate of the Old Water-Colour Society but chose to submit few pictures to their exhibitions. The works he did submit rarely sold. He described himself as still “but a mere drawing master – the very thing I dreaded most on setting out in life.” Around 1830 he changed his style again, using a medium, probably flour or rice paste, which when mixed withcolour remained moist for longer and could be dragged about,
lifted and manipulated using a hog’s hair brush.

In 1834, he was appointed Drawing Master at King’s College in London. In 1841 he returned to Norwich for nearly two months and received some measure of recognition as an artist of importance. There he set about making a large series of drawings. His old friend and patron, Dawson Turner, warned him of the dangers of stress and burn-out. Cotman replied “‘tis as impossible to pass a fine subject and not to book it as it is for a miser to pass a guinea and not pick it up.” Six months after he returned to London, Cotman became seriously ill. He died on July 24, 1842.

Throughout his life Cotman struggled for recognition and to find a market for his paintings. He is now regarded as one of the leading figures in the history of watercolour. Cotman’s sense of pattern and design – his paintings have been compared to Japanese woodblock prints and stained glass windows – is particularly admired. In the opinion of Laurence Binyon, Keeper of the Prints and Drawings Department at the British Museum in the early 1930s, “Cotman made the most perfect examples of pure watercolour ever made in Europe.” 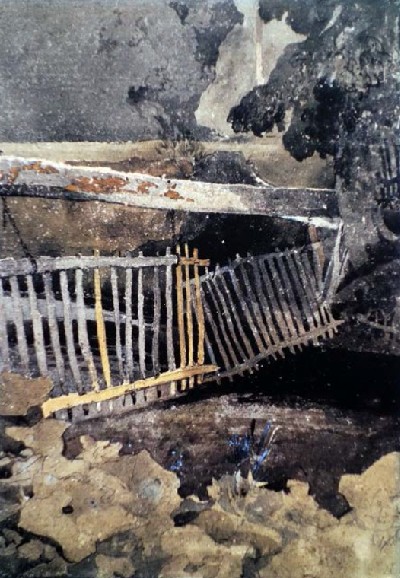 In the summer of 1798, Cotman went to London to learn to be a painter. His father consulted John Opie, later to become Professor of Painting at the Royal Academy, regarding his son’s choice of career. Opie’s verdict was blunt: “Let him rather black boots than follow the profession of artist”. Fortunately for the development of watercolour, Cotman ignored his advice.

The Drop Gate in Duncombe Park, painted in 1805 on one of his three visits to Yorkshire, is one of Cotman’s best-known paintings. Cotman usually painted in the studio from pencil drawings done on location but he said in a letter that this painting was “coloured from Nature and close copies of that fickle Dame”.

Martin Hardie wrote in Water-Colour Painting in Britain “The Drop Gate is a drawing of nothing but some broken rails hanging over a stream – a drop gate, a water pool and some weeds – but the design is such as no other painter of the time would have conceived; a design of straight lines, horizontal and diagonal, and sharp angles contrasting with the soft contours of foliage and the curves of burdock, lyrical in its rhythm and colour”.

Indeed, as Hardie wrote, “It was an ‘abstract’ art”, executed by a master of pattern and design.