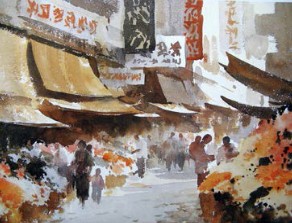 I clearly remember the first time I saw the work of Edward Seago. My father subscribed to the English magazine The Artist and I would eagerly await the arrival of each monthly issue. I had been given a box of Winsor & Newton watercolours for Christmas and was teaching myself to paint by copying the watercolours reproduced in its pages. A series entitled Masters of Watercolour and their Technique included a two part feature on Seago.

I was nine years old at the time and not yet familiar with the maxim “Simplicity is genius,” but here were paintings that exemplified the truth of this saying. Ron Ranson, author of two books on Seago, had a similar experience: “At the age of 50, like many others I had lost my job in engineering, and the future looked very bleak. While seeking a direction I had been shown a book of Seago’s paintings.


His work almost took my breath away, and borne along on a wave of intense enthusiasm I taught myself to paint in watercolours, trying as best I could to follow the principles of directness and simplicity contained in his paintings...Within a few years I was teaching others, writing books and making videos on watercolour, all the time with Seago’s work before me as an inspiration. I discovered that artists far more illustrious than I revered his work and were strongly influenced by him. One of these was Edward Wesson R.I. a fine artist/teacher who had an enormous following.”

Seago’s deceptively simple style was a result of careful observation and an intensive study of the natural world. 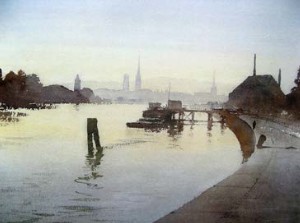 From an early age he suffered from a mysterious heart complaint.

Doctors were baffled by the sudden onset and the alarming severity of Seago’s heart turns. He would lie nearly unconscious and in great discomfort while his respiration dropped to 5 breaths per minute and the sound of his heart beating at twice its normal rate could be heard from outside his bedroom door.

When he recovered from these turns, he would paint what he saw around him.


When he was 12, Seago met his first real artist, Ernest Chance, who as well as answering his questions on painting lent him a book on landscape painting by Sir Alfred East R.A. Seago claimed this book taught him more than he could ever have learned at art school. 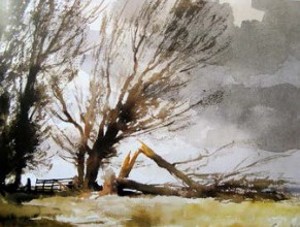 He also had the good fortune to meet Fanny Louisa Coles, a Bournemouth art mistress and watercolour painter.

When Seago sent his paintings to her for criticism, she wrote back “It would help so much if some of the masses were flat, that is absolutely free from detail. Take special note of this, as it means so much and makes so much difference.

Some parts of any picture must be restful (free from detail) and often, this restful part will occur in the shadow. Anyway, you must find it somewhere. She also advised him to “Try to let each mass and touch mean something.”

Seago clearly absorbed these lessons on the importance of simplicity.


"The Broken Willow" by Edward Seago


An old adage in painting is to put your lightest lights next to your darkest darks and Seago made masterly use of counterchange in his work. His use of figures in his paintings is also well worth studying. 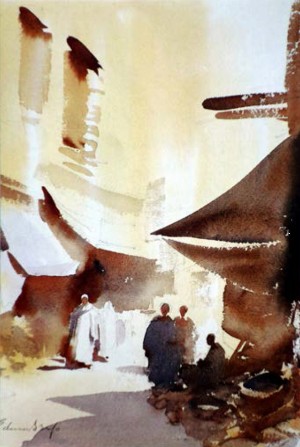 In Seago’s paintings, the figures are part of what top Australian watercolourist Joseph Zbukvic calls the jewellery. With a few strokes of the brush, Seago manages to convey posture and body language in masterly fashion.

Seago was enormously popular with the public during his lifetime. People queued overnight to be the first to purchase his paintings. The gallery where he held most of his solo exhibitions restricted buyers to purchasing one painting each. His exhibitions were almost invariably sell-outs.

Perhaps because of his immense popular appeal, Seago was shunned by the British art establishment. He was never elected an R.A. nor were his paintings bought for any National Collection. Most fashionable art critics ignored his work. However, he was recognised by the Royal Society of Painters in Watercolour, being elected an ARWS in 1957 and an RWS in 1959.

Seago has been called “one of the greatest watercolourists of our day and age.”

He himself wrote “Watercolour is a medium for the experienced and practical hands. So much of its beauty lies in direct and quick painting which must be done without hesitation. Scratched and niggled, it loses that liquid luminosity – one of its greatest qualities.”