“Millard Sheets is the single most influential individual in art in California in the 20th century.” Peter Mullins

“Millard Sheets is more than a painter; he is an artist in the Renaissance sense. That his tremendous energies have led him into many fields of art and architecture should not obscure the fact that Sheets is one of the most significant watercolorists of our time.” Rex Brandt

“Millard Sheets had star quality from the beginning.” Phil Paradise 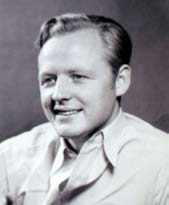 During the 1930s and 1940s paintings by members of the California Water Color Society took the American art world by storm. The hallmarks of California Style watercolours were large format paintings, broad brushwork and strong vibrant colour. The acknowledged leader of the California School was Millard Sheets whose energy, drive and charisma brought California watercolour painting to national attention.

Sheets was born on June 24, 1907. His mother died 17 days later, from complications arising from his birth. Sheets’ grief–stricken father turned his infant son over to his in-laws. In their book Millard Sheets, One-Man Renaissance, Janice Lovoos and Edmund F. Penney wrote, “Sheets was able to develop his potential and take his career as far as he did by virtue of incredible self-discipline, developed and internalized during his childhood. The guiding force in his young life was his maternal grandfather, Lewis Owen.”

As a young child, Sheets was often cared for by his teenaged aunt who gave him crayons, pencils and paper to amuse himself while she baby-sat him. Sheets knew from the age of five that he would become an artist. 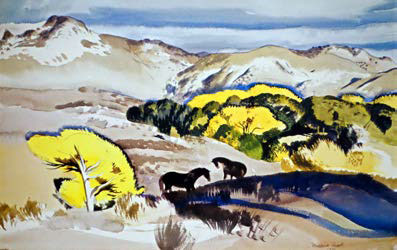 It’s an adage in Eastern philosophy that when the student is ready, a teacher will appear. After his aunt married and moved away a hobby painter neighbour taught Sheets to mix paints and copy calendar
pictures. At the age of eleven, he won first prize for copies in the art section of the Los Angeles County Fair. After lecturing Sheets on the evils of copying, Theodore Modra, art director of the show and a well-known painter, offered to tutor him. Once a month, Modra critiqued Sheets’ work; he also introduced him to plein air painting.

When Sheets was sixteen he had a painting accepted for an exhibition at the Laguna Beach Art Gallery. His painting caught the attention of Clarence Hinkle, chairman of the selection committee and a distinguished California artist. He invited Sheets to visit him once a month at his home. Hinkle taught Sheets about colour and design; he also introduced him to the important concept of the underlying abstract structure which is a crucial element of every successful painting, irrespective of style.

Upon graduating from high school, Sheets enrolled at the Chouinard Art Institute in Los Angeles. His father, who had promised to pay his college tuition fees, refused when he found Sheets wanted
to study art. Fortunately his uncle, who owned a chain of petrol stations, offered to lend Sheets the money he needed. For his first two years at Chouinard, Sheets and his cousin raised rabbits to help pay for travel and art supplies. Sheets got up at 5am each morning, fed 250 rabbits then made the two hour trip to Chouinard, returning home in the evening to once again feed the rabbits then go to bed. Every weekend, the two dressed 40 rabbits for sale.

It was at Chouinard that Sheets took up watercolour. In an interview shortly before his death in 1989, he recalled how one of his tutors, Frank Tolles Chamberlin saw him returning from a painting trip laden down with his oil painting paraphernalia. 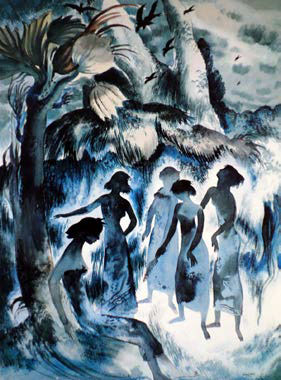 Sheets took up watercolour and fell in love with it. He was joined by fellow Chouinard students Phil Dike and Phil Paradise. New to watercolour, they developed their own distinctive style. “We began to make watercolours that had the weight and stature of an oil,” Paradise recalled.

Sheets had enrolled at Chouinard in 1925. By 1927 he was already winning awards and was asked to teach a watercolour class to his fellow students. In 1928-1929 he had already swept the West Coast art competitions, winning over $3,000 in prize money. A student asked a Chouinard tutor how Sheets had achieved success so rapidly. “Because he turned in three paintings to your one,” the tutor replied.

As well as entering his own paintings in exhibitions throughout the country, Sheets encouraged his fellow artists to do the same. Phil Paradise recalled, “We just sort of took the place by storm and
we began to win the awards and the attention and from then on we were part of the national exhibiting group.”

Scottish artist George Gibson, who arrived in Los Angeles in 1930 to work in the film industry, recalled the effect of seeing California Style watercolours for the first time: “It was a knockout and it really set me back on my heels because I saw alla prima painting at its very best. It seemed as though these guys poured paint on the thing and it came out a picture. The colour was vibrant and just literally glistening, jumping off the paper, practically.”

Sheets stated repeatedly that only a few artists could “inhabit the ivory tower.” He preached that art was important in everyone’s life: in the past artists were trained to produce useful things, involving themselves in furniture and industrial design, town planning and architecture. And Sheets practised what he preached. In 1939-40 he designed seventeen air training schools for the United States Air Force. In the 1930s an 1940s he painted a number of murals in public buildings.

In 1953, after two decades of design commissions, he founded Millard Sheets Design Inc., a company which employed up to 30 artisans and architects. From the 1950s to the 1970s he designed and supervised the construction of scores of commercial buildings. In all of them murals, mosaics and sculpture were an integral part of the design.

In addition to this design work, Sheets was actively involved in teaching. He was Head of Art Department at Scripps College and then Director from 1932 to 1955. From 1953 to 1959 he was Director of the Los Angeles County Art Institute. He taught art and conducted workshops over six decades.

From 1940 to 1956 he was Director of the Art Exhibition at the Los Angeles County Fair where he organised exhibitions featuring both American and international art which attracted around a million visitors each year. Sheets’ daughter observed, “His wide-ranging passions and pursuits weren’t understood or approved of by several critics who, insisting that his talent lay in painting, couldn’t countenance what they considered his frittering away of his gifts in
other genres.... It should not be forgotten that his paintings alone numbered over 6,000.”

Throughout his life, Sheets suffered from severe headaches. His daughter recalled, “He was down for the count at least once a week, but, to everyone’s astonishment, he’d literally bounce right off the bed and back to work the minute he felt better.” Perhaps the headaches were his body’s way of telling him to take a break.

Sheets was the driving force behind the success California watercolour enjoyed in the 1930s and 1940s. In the words of his good friend Phil Dike, “He ejected us into a whole new outlook about how a painter would succeed.” Whether Sheets was the best artist of the group is open to debate. Andrew
Wyeth included two California painters in his list of America’s 20 greatest watercolour artists: Millard Sheets and Hardie Gramatky. However, E. Gene Crain, who amassed a collection of over 900 works by the California School, believed Phil Dike was the best artist. But Crain acknowledged that Sheets was “clearly the most commanding presence of any of the artists of this group. You couldn’t help but be drawn to Millard.”


Indeed, in Crain’s estimation, “Without Millard Sheets’ energy and direction it is questionable whether there would ever have been a California School.”