‘I have always painted for fun. If it ceased to be fun, I would stop painting.’ Born in Edinburgh in 1880, Sir William Russell Flint was one of the most famous watercolourists of the twentieth century. His father, Francis Wighton Flint, was a successful commercial artist and his younger brother, Robert Purves Flint RWS, an able watercolourist whose achievements were somewhat overshadowed by his more illustrious sibling. 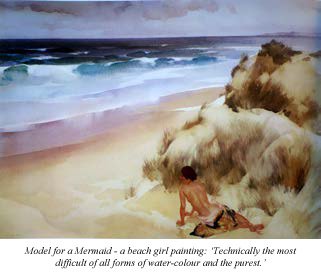 Unsurprisingly, Russell Flint showed an early interest in art. ‘I lost myfirst sketchbook when I was not more than five,’ he wrote. At fourteen, he left school to take up a six year apprenticeship as a draughtsman with an Edinburgh printing firm. There he worked from 8 to 6 each day and for the last five years of his apprenticeship was also sent from 7 to 10 each evening to the Royal Institution School of Art. He said of his apprenticeship ‘What I missed during those sensitive years is incalculable but in compensation I acquired the habit of discipline and the skill which have served me well’.

In 1900, his apprenticeship over, Russell Flint left for London to take up a job as a medical illustrator. The work, according to his biographer, ‘consisted of making, from microscopic slides, or directly from the
specimen, coloured drawings of diseases of the eye, bullet wounds (Boer War), and examples of leprosy from the Andaman Islands. He was warned, before he started, never to lick his brush...’

From 1903 to 1907, Russell Flint worked for the Illustrated London News. This was an era when pictures accompanying newspaper stories were provided not by photographers, but by teams of illustrators. In
1908, he decided to hold his first one man show. It was an expensive failure, making a loss of £92 at a time when illustrators earned around £600 per year. Russell Flint next worked as a book illustrator, providing
colour plates for limited editions of the classics.

His father had an enduring fear of the hardships of the life of a fine artist which he passed on to his children, so it was not until his late thirties that Russell Flint decided he could make a living as a painter of landscapes and figures. He mounted a second one man show which, unlike its predecessor, was a complete sell-out. 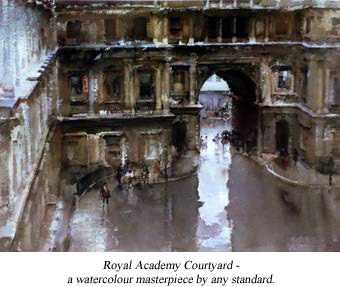 Russell Flint went on to become probably the most famous British watercolourist of the twentieth century. He was made an ARWS in 1914 and an RWS in 1917. He served as President of the RWS for twentyyears from 1936. He became an ARA in 1924 and an RA in 1933. He was knighted for services to art in 1947. Also receiving knighthoods that day were Malcolm Sargent and Laurence Olivier.

It was often claimed that Russell Flint’s success was due to technical tricks. He strongly denied this, saying ‘Ten thousand tricks will never make an artist.’ He used no methods, he maintained, that had not been explained in numerous books on watercolour technique.

His early paintings, of which From a Capri Cliff is an example, show the influence of the ‘blottesque’ technique of Scottish watercolourist Arthur Melville. However, Russell Flint was to become best known as a painter of the female figure.

He wrote in 1943, ‘A beautiful woman is one of the marvels of creation, and adequate portrayal a matter of extreme difficulty... Ever since, forty-three years ago, the curtain was drawn aside to reveal my first model they have played an essential part in my work. Creatures of romance to many, to most painters they are good, hard-working, honourable girls.’ Throughout the 1930s many of his beach girl paintings, like Model for a Mermaid, were published as signed limited editions which proved very popular with the public. Russell Flint wrote that these paintings were ‘Technically the most difficult of all forms of watercolour painting and the purest. I might be asked why and the answer would be that these subjects are essentially the most delicate, direct and subtle of all. Any heaviness, any fumbling, any muddiness of colour would ruin them. I claim there is far more in them than meets even the most professional eyes, and I unashamedly confess to amusement at imitators’ efforts. I never “make them up.” ’

The publishers of the signed limited editions which made Russell Flint a household name encouraged him to paint large scale figure pieces, or landscapes and interiors with figures because these subjects were most
likely to be commercially successful.

Russell Flint painted his landscapes and interiors on location, mainly in the south of France: townscapes, alleys, interiors of old buildings andcommunal lavoirs – the public washing places found in many towns and villages, where womenfolk toiled at their daily chores. The figures, invariably female, either clothed or in various states of undress, were added back in the studio, where he always painted from the model. He generally visualised where he was going to put the figures and left that part of the paper clean or else scrubbed that area of the painting back to white paper using a small flat hogs-hair brush. Russell Flint always painted on thick 300lb (640 gsm) paper which allowed him to alter his washes after they were dry.

Many of these paintings depict an Arcadian fantasy world where female farm workers, often stripped to the waist, relax at the end of a hot day’s work in the fields; or gypsies, similarly unclad, sit about gossiping. In
keeping with Russell Flint’s background as an illustrator most of these paintings tell a story, hinted at in titles such as Gypsy Scandal Market, Vanity in the Wash-house, Ceres’ Daughters and so on. What they also
display is his mastery of watercolour technique. Russell Flint excelled at using granulating washes to depict the texture of stone walls and arches and his rendering of the female form in watercolour was second to none.

Russell Flint’s enormous popularity almost inevitably led to the critics turning on him towards the end of his career. In a review of his solo exhibition at the RA in 1962, The Apollo wrote ‘Russell Flint’s art seldom rises above a level of incidental triviality. He has rarely, it would seem, produced a picture that meant anything more than the evocation of an imaginary landscape where olive-skinned gypsies or English maidens disport themselves.’

However, Russell Flint was a much more versatile artist than critics gave him credit for. He himself wrote ‘I suppose I have painted more Scottish landscapes than anything else; and I never paint anything with greater pleasure.’ Other paintings such as No 1 Slip, Devenport Shipyard and Royal Academy Courtyard are masterpieces of watercolour painting by any standard.

Sir Charles Wheeler, President of the Royal Academy wrote: ‘”A good wine needs no bush”, nor do these works of Russell Flint require any abstruse explanation. The pictures speak for themselves in pattern, form and colour, and that, I am sure, is how it should be...Broadly speaking an artist’s business is to communicate his thoughts, ideas, and emotions to those of his fellow men who are willing and able to receive them. Judging by their wide acceptance it can be said with certainty that William Russell Flint has served his generation well. No more is expected of any man. Posterity will see to the rest.’