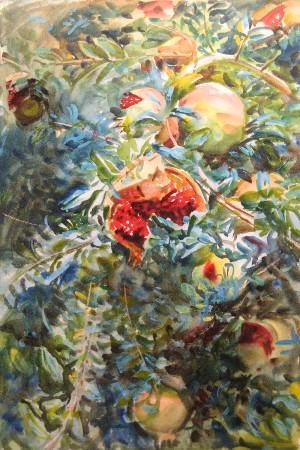 John Singer Sargent was the most celebrated portrait painter of the Edwardian era. He achieved fame and fortune painting the rich and famous. But Sargent, whose wry definition of a portrait was “a likeness in which there was something wrong with the mouth,” had grown tired of the paintings that had established his reputation. “No more paughtraits whether refreshed or not,” he wrote to his cousin Ralph Curtis. “I abhor and abjure them and hope never to do another especially of the Upper Classes.”

To another friend, Sargent wrote “I have an entirely different feeling for sketches and studies than I have for portraits which are my ‘gagne-pain’ [breadwinner] + which I am delighted to get rid of - but sketches from nature give me pleasure to do and pleasure to keep + more than the small amount of money that one could ask for them. Moreover now that I don’t do portraits, it is a comfort to have something that I can exhibit.”

After 1900, watercolour painting became a major part of Sargent’s artistic output. He set aside around three months of each year (generally August-October) for plein air painting trips around Europe. His friend and biographer Evan Charteris wrote “But it was away from his portraits, on the canals of Venice or the plains of Palestine, in the passes of the high Alps or among the dancers of Spain, or the fountains and cypresses of Italy and the gardens of Sicily, or, again, at Capri or Corfu, or on any one of the countless journeys that he made with friends, that his spirit was most at ease and serene - anywhere, in fact, where he could ‘make the best of an emergency’ as he called painting a water-colour. And an emergency was seldom wanting.”


"Arab Gypsies in a Tent" by John Singer Sargent

Sargent exhibited his watercolours at the Royal Watercolour Society, the New English Art Club and in solo shows at the Carfax Gallery in London but they were not for sale. “These sketches keep up my morale,” he explained, “and I never sell them.”

In 1909, Sargent, together with an American friend Edward Darley Boit, held a joint exhibition of watercolours in New York and Boston. When Boit raised the question of sales, Sargent resisted the idea. The only thing that would tempt him, he wrote, was if a museum should offer to buy the whole lot, which he considered most unlikely. But both the Brooklyn Museum and the Boston Museum of Fine Arts were interested. The Brooklyn Museum got in first, purchasing all 83 of Sargent’s watercolours in the exhibition for $20,000.

The exhibition was so successful that arrangements were made for another to be held in 1912. The Boston Museum, determined not to miss out this time, arranged to purchase all 45 of Sargent’s paintings three months prior to the opening. 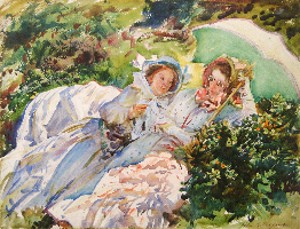 John Singer Sargent Watercolors was published in April 2013 to accompany an exhibition uniting the collections of both museums. The introductory chapters, Sargent and Watercolor and Sargent’s Watercolors: Not for Sale, give an overview of his development as a watercolour painter and outline how his paintings came to be acquired by the two museums.

The remaining chapters comprise full-page colour reproductions of the 100 watercolour paintings shown in the exhibition, grouped according to subject. Each chapter begins with a brief introductory essay.

A chapter entitled Approaching the Modern points out that Sargent, often regarded as a conservative, academic painter, in fact produced a number of watercolours in the early years of the twentieth century that were well ahead of their time.
<html> <p style="font-family:Times New Roman;font-size:90%;">"Simplon Pass: The Tease" by John Singer Sargent</p> <html>
The final chapter, Bringing Back Something Fine, looks in detail at Sargent’s equipment and techniques.

The quality of the reproductions is generally excellent, with one notable exception: the colour balance in the reproduction of a favourite painting, Corfu: Lights and Shadows, is clearly wrong when compared with reproductions of the same painting in other books on Sargent.

There are several reproductions of details from the paintings, giving artists the opportunity to “look over Sargent’s shoulder” and try to work out how he did it.

Sargent is one of the greatest of watercolourists. Joseph Zbukvic calls him “The only watercolourist I truly admire.” Trevor Chamberlain wrote “I recall seeing John Singer Sargent’s watercolours at an exhibition in London and being bowled over by them. I had never seen paintings so fluid and assured, so full of light. I still marvel at them now.