An interview with Brian Baxter

Brian Baxter has taken a serious approach to watercolour for only the last 6 - 7 years, but already he is producing paintings that impress. That is not surprising. He has been a professional artist for 43 years. One might ponder why an artist who had painted successfully in oils and acrylics for that length of time, might turn his focus toward a new medium. In fact, Brian dabbled in watercolour intermittently over the years but always found it challenging. The bills needed to be paid, which meant selling paintings. He knew that could be done easily enough using his normal media, so he stuck with oils and acrylics. Why the change in direction? We trace Brian’s story:

Brian became a window-dresser in a department store when he left school, then moved into sign-writing. At a young age he was influenced by a local artist, Aston Greathead. “Aston was a wonderful old man, an accomplished watercolourist and winner of the Kelliher Watercolour Award in 1966.” Brian launched into the art world and in 1973 became a full-time artist. “That’s the year that I wrote ‘Artist’ as my occupation on my tax return. I’m still awed by the idea that I am ‘An Artist’.” In 1977, he won first prize in the Kelliher Art Award for Landscape. This gave a huge boost to his confidence and brought him public acknowledgement. Over the years he has exhibited around New Zealand, in Adelaide and Washington DC.

In recent years, with greater financial security, the need to sell was not so pressing. At last Brian had the opportunity to follow a long-time yen to experiment with watercolour. He explains his fascination: “Watercolour has a spontaneity, a freedom – and it’s a disobedient, unpredictable medium. At first I found it challenging to “unlearn” oil painting techniques, to give up some ‘control’ and let watercolour talk. Now I appreciate the fresh looseness and find ‘accidents’ can be appealing. I have a drawer full of failures, but sometimes watercolour will create a brilliant passage that you couldn’t contrive to paint yourself. One thing is for sure, it won’t be bullied!”

Among the artists who have influenced Brian’s development in watercolour are the Melbourne painters, Joseph Zbukvic, Alvaro Castagnet, Greg Allen and Ross Patterson. Brian has crossed from Blenheim where he lives, to attend workshops by these artists in Wellington, during which he made new friends in the watercolour world. He greatly admires the work of his friend John Crump, whom Joseph Zbukvic described as New Zealand’s best contemporary oil painter. He also appreciates the work of Michael Bennett and Jacky Pearson. Brian enjoys cruising the Internet to see what other artists are doing. He takes what he calls an ‘unconscious inspiration’ from this.

His subject matter is mainly landscapes but he also paints still lifes, florals and enjoys portraits. He describes his style as traditional representational. In his studio he has an oil easel and a watercolour easel set up side by side and has a plan to paint the same subject in each medium and see what results. 95% of his
painting time is in his studio. “Although I enjoy painting outside I find I have a much higher failure rate and tend to retreat lazily to the convenience and comfort of my studio.” Brian prefers not to develop a set formula, describing himself as a ‘jack of all trades and master of none’. “I have no particular recipe or method; I’m forever a learner.”

Brian has two tips for fellow artists: Learn how to paint and then “Do it, do it, do it. So many people claim they don’t have the time, but we all have 24 hours in a day. Make it a priority. And, secondly, don’t tell ‘em everything.” 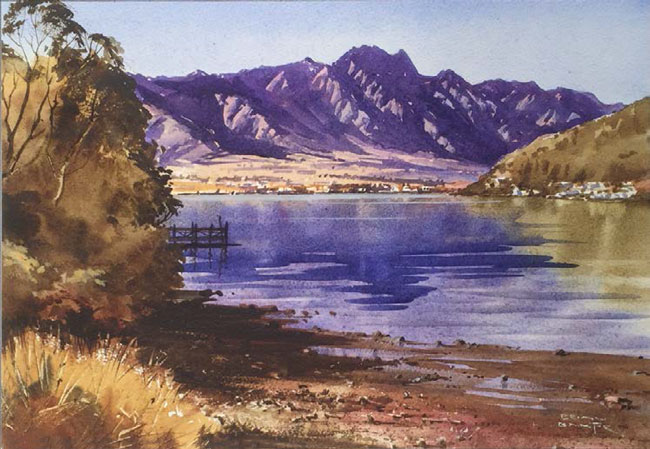 “The Remarkables” by Brian Baxter
A friend recently brought to my attention a very good TV documentary on various artists using their work as a vehicle for protest - political, social, moral, whatever. At least one of the artists’ work was well executed
technically - good drawing, good colour sense etc. Some others were more of a straight social comment in abstract form, and frankly too negative and even depressing for me. At the risk of being thought too head in the sand I prefer to concentrate on the beauty that is everywhere around us, especially in this “God’s own” that we live in.

This painting of the Remarkables, Lake Wakatipu is an attempt to portray some of this beauty. After standing at the spot on a calm summer morning, sketching, photographing and soaking up the peaceful atmosphere, I feel my subsequent studio painting falls way short of capturing the full impact of the scene. However, hopefully I am not the first artist to experience this feeling in the presence of a stunning piece of New Zealand scenery. I take consolation from the thought that I will no doubt be presented with many more opportunities to try again and perhaps get it right.