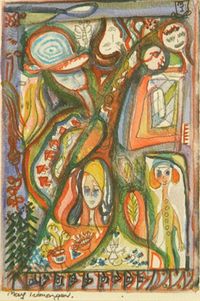 ‘I paint from the sub-conscious’

One of Watercolour New Zealand's early members, May Iremonger was a noted artist of Raumati Beach on the Kapiti Coast. May painted vibrant watercolours. "I have to paint or I just don’t feel well." - she said.

She was English by birth and during the Second World War was a wireless operator at Chicksands Priory in Bedfordshire where she intercepted German messages. She married a New Zealander and moved here after the war.

She tried her hand at pottery but prefered to paint. `I have no idea what's going to happen when I begin a painting,' May said. `It gradually evolves.'

She continued to paint, despite decreasing eyesight, and more limited mobility. `Painting takes you into another world,' she said. May also wrote poetry and loved studying the lives of artists.


AN INTERVIEW WITH THE ARTIST 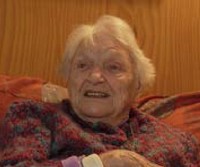 -May, how do you decide on a subject to paint?
Anything that goes on in the world that hits me hard, I paint about or write a poem about. I express my feelings, ideas, elements of my subconscious mind.

-How do you begin on the blank sheet of paper?
I'm using colours. All I think about is the colours. It evolves — that‘s the word.

I started with Winsor & Newton paints, then went to Schminke. It‘s much brighter and thicker and more exciting. But I had lots of rejections from the Academy. You would be rejected on bright colours ... for watercolour bright colours was a no-no.

My favourite colour is indigo. When I‘m painting I have about 6 jam jars of water with a brush in each one, otherwise the colours get mixed. Sometimes when I'd finished I would think "It looks dull." So I'd get out a divergent colour and bring it alive.

-What memories do you have of early days?
Betty McAuley organised a group to paint regularly at the boating club at Otaihanga. You had to look at the scenery, then go indoors and paint from memory. Betty made people paint in a big way. I learnt from Melissa Hogg that you can use colours straight from the tube. I did a lot of drawing and painting with the Watercolour Society in the
Wairarapa. We were based at Martinborough. I painted well there.

-Which artists do you admire most?
Frances Hodgkins was the first artist I learnt about. Kirks (Kirkcaldie and Stains) used to have private exhibitions and I saw her work there. I admire the French artist Raoul Dufy - I like his free style of doing things, Kandinsky - look at this painting ... isn‘t it amazing that he painted like that in 1866?

Art patron Edgard Telles Ribeiro, was drawn to May Iremonger's works during his time in Wellington as the Ambassador of Brazil to New Zealand 1997-2002. Edgard is internationally renown as an author and ambassador for the arts. Earlier this year he shared his thoughts on May's place in the art
world with the Watercolour New Zealand Oral History team.

After a visit to the Guggenheim Museum in New York he wrote ― That particular day, I went to pay homage to May, who happens to belong (as far as I am concerned) in the family of Oskar Kokoschka, Vassily Kandinsky, Marc Chagall and, to a lesser extent, Paul Klee and Joan Miró. The five were all there, very well represented, smiling at me - and at her. That a country like New Zealand, so sophisticated in many respects, still disregards the great artist that she is - au pair with Janet Frame in literature -
will never cease to baffle me... But what else is new in the domain of art? Who would actually pay any attention to an old lady who lives in Raumati Beach, speaks fondly of a long gone cat named Marco, and gets very busy with her garden? Just because she draws & paints like an angel - who knows a thing or two about hell as well? Why bother, right?

... I only wish I could decipher a little better her handwriting, as her amazing hieroglyphs (some of which I could easily hang in my walls) seem so rich in secrets.

When told she was Joint Winner of Watercolour New Zealand's Supreme Award (2015) for her painting "The Wilderness", which depicts the bottom garden of her quarter-acre section which these days May, who turned 95 in March, has a gardener look after, May said: "This happens to other people, it doesn’t happen to me!” 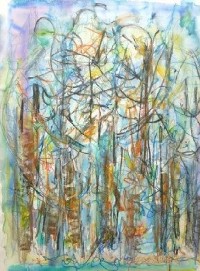 May began her life in the Arts as a potter. “The best thing I ever did was to change over from being a potter to being a painter,” she says. She always paints abstracts: “I can’t see the world in any other way.” May recalls that in the early days getting abstract paintings accepted by the Academy was a difficult business.

Edgard Telles Ribeiro, former Brazilian Ambassador to New Zealand and a great champion of May’s work, wrote that May belongs in the same family as renowned abstract artists Oskar Kokoscha, Vassily Kandinski and Marc Chagall. He expressed astonishment that May was not more highly regarded here: “That a country like New Zealand, so sophisticated in many respects, still disregards the great artist that she is – au pair with Janet Frame in literature – never ceases to baffle me.... but what else is new in the world of art?

Who would actually pay any attention to an old lady who lives in Raumati Beach, speaks fondly of a long gone cat named Marco and gets very busy in her garden? Just because she draws and paints like an angel, who knows a thing or two about hell as well, why bother, right?

I only wish I could decipher a little better her handwriting, as her amazing hieroglyphs (some of which I could easily hang on my walls) seem so rich in secrets."

Perhaps this award will go some way towards earning May the recognition she deserves as a prominent New Zealand abstract painter.