Maurice Middleditch is a well known Central Otago watercolourist whose paintings have won many awards. John Toft interviewed Maurice at his Aurum Gallery in Bannockburn, near Cromwell.


The Path to Painting 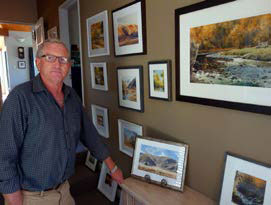 Like Brian Baxter and Aston Greathead, Maurice Middleditch was a signwriter before he became a painter. For Maurice, work as a signwriter came to an end in the mid 1980s, not long after the advent of computer controlled plotters. ‘I never adapted very well to the computer age – I belong to the old school,’ he says.

Maurice gave up signwriting and got into painting large murals. Examples of his work can be seen at the Antarctic Centre in Christchurch and the Canterbury Museum. But computers, with their ability to print bigger and bigger enlargements of colour photographs, were soon to replace artists in this field as well. Maurice had always painted as a sideline – he sold his paintings through Fishers in Christchurch – and in 1999 he moved to Bannockburn in Central Otago to paint landscapes full time.

A look around his Aurum Gallery reveals that Maurice is an accomplished artist in both oils and acrylics but these days he mostly paints watercolours, a medium he describes as ‘infuriatingly frustrating to work with but enormously satisfying when they’re going well. So difficult and yet so rewarding all at the same time.’

Maurice confesses that he took up watercolour painting for reasons of marital harmony. His wife Janette, whose good taste and eye for colour and design are everywhere apparent in their superb garden, was a lover of watercolour. ‘She who must be obeyed wanted me to take it on,’ he says, jokingly. In his early efforts, Maurice used the paint far too heavily. The turning point came when he stumbled across Adrienne Pavelka’s paintings. Maurice was struck by their simplicity, the colours and Adrienne’s all round skills with the medium. He promptly enrolled in her watercolour classes. Maurice credits Adrienne with setting him on the right track as a watercolour painter.

And watercolour was the perfect medium for capturing the fleeting effects of light and atmosphere Maurice likes to paint. He recalls that Douglas Badcock used to say ‘Knowing where to go is only part of it, but knowing when to go can be everything.’

When the scene is flooded with sunlight through the middle of the day, says Maurice, you can’t do much with it, but in the early morning or in the late afternoon and early evening the light on the hillsides of Central Otago can be stunning. The problem is that the light is changing while you’re looking at it and, in some cases, in five or ten minutes that light is gone. ‘People say “Why do you paint from photographs?”’ says Maurice. ‘When the light is changing as rapidly as it does change, I like to record it. Record it while it’s looking so good because in minutes it’s gone.’

Maurice likes to stretch his paper – he prefers Saunders 300 gsm rough – so that it stays taut and doesn’t buckle under the washes. He mostly paints with squirrel hair mops but uses a one inch flat brush for blending skies. Like a lot of well known South Island watercolourists, he prefers Maimeri paints. For the colours of Central Otago his basic palette consists of Ultramarine, Raw Sienna and Yellow Ochre, Sap Green (which he never uses straight) and Burnt Umber. For distant hills, he uses Ultramarine with a touch of Permanent Violet Blueish, a Maimeri colour made from the same pigment (PV23) as Winsor & Newton’s Winsor Violet. Maurice doesn’t like to get too bogged down in colours and mixes them without really thinking about it. However, he cautions that staining colours like Permanent Violet Blueish need to be used in a very restrained way.

He paints a scene in the time-honoured fashion, starting with the sky, then the middle distance and coming forward to the foreground. Maurice admits he finds foregrounds difficult. The key, he says, is to avoid including too much detail and, most importantly, knowing when to leave it alone: ‘Don’t fiddle with it. But you can’t resist it – you think that if you fiddle with it you’re going to make it better.’ As top Australian watercolourist Joseph Zbukvic says, ‘Every watercolour that is ruined is preceded by the words “I’ll just do this.”’ ‘Like everybody,’ says Maurice, ‘I struggle with it.’

Maurice likes to paint the rocks and tussocks that are such a characteristic feature of the Central Otago landscape. But finding a technique of rendering them effectively was no easy matter. Tussocks, in particular, are not easy to paint. Maurice asked Austen Deans what the secret was, and was told to observe them closely. Maurice’s tip for painting tussocks is when you put on the colour at the base of the tussock, smudge it with your finger. ‘They’re the very devil of a thing to paint and to make them look like tussocks....you are only painting a simplified version of what you’re looking at.’ The extreme simplicity of Adrienne Pavelka’s work is a quality that Maurice admires enormously.

It’s surprising how many homes in Canterbury have paintings by Austen Deans on the wall; the same is true of Maurice Middleditch in Central Otago. ‘People have told me nobody paints the Central Otago landscape quite like I do,’ he says. Maurice’s paintings have won many awards, including first prizes in the Arrowtown Autumn Festival and the Peters Doig competition. At the age of 76, after spending almost twenty years painting the Central Otago landscape, Maurice still looks forward to entering his work into exhibitions and competitions.