Jacky Pearson is a member of Watercolour New Zealand and has taught watercolour in Australia, England, India, Belgium, the Netherlandsand at many venues around New Zealand.

The group met to consider their subject and plan the action. They pored over a variety of photos and selected one of William Street in central Bathurst, with a moody early morning atmosphere and the church spire as a focal point. John was assigned the task of drawing and the rest split into pairs to tackle the painting. Robert and Joe did the underpainting, Jacky took the background buildings, church and central island with Jane painting the large side trees; David and Chan did the cars and added tones to the large trees. Finally David and Jacky washed in the foreground shadows. The painting was signed by all seven.

There was no rehearsal. Jacky described the team as all chiefs and no Indians. The painting took about an hour with much politeness and diplomacy. Jane gave a running commentary to keep the 300 strong audience bubbling, augmented with much side-line banter from the other twenty tutors!

The sale of the painting raised $7500 (AUD), enough for seven scholarships. Paul Malouf, director of the school, donates these scholarships to people in physical or mental strife who need their spirits raised by the wonder of creating artworks.

David Taylor suggested that a single watercolour created by a team of seven may be a world first! 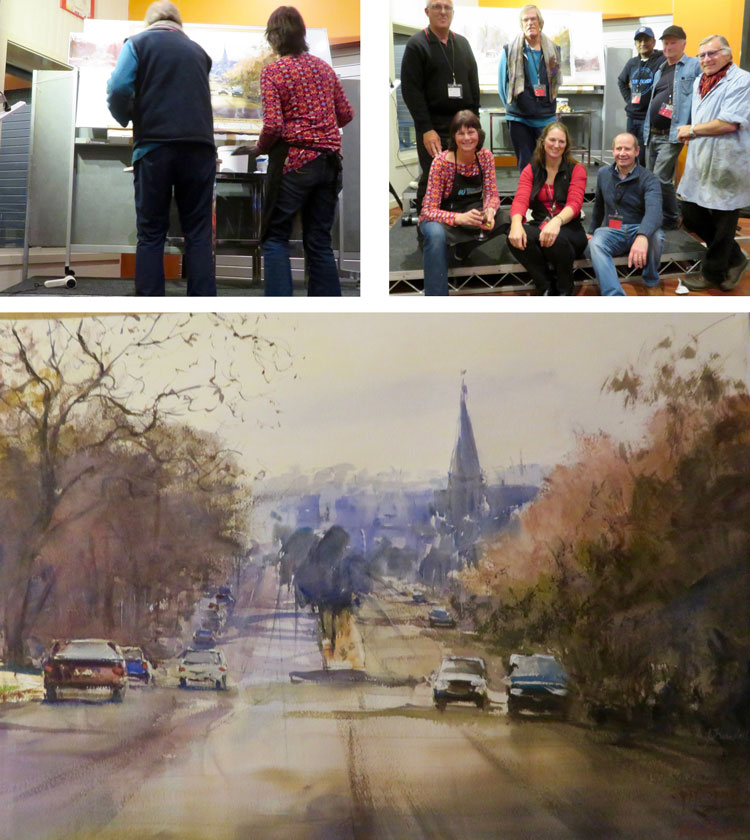 
Copyright © Watercolour New Zealand and its contributors. All Rights Reserved.