Phil Dickson has for a long time been one of the pillars of Wellington’s art community, a key supporter and volunteer for the Wellington art club and Watercolour New Zealand and a member of the New Zealand Art Academy, where he is an elected artist member. 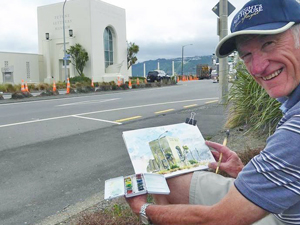 Wellington, New Zealand has always been my home, having been brought up in Lower Hutt, also living in an inner city suburb for many years and now resident in Lower Hutt again.

I have always had a pencil in my hand, drawing. I am largely a self-taught artist. My inspiration comes from a lifetime's love of landscape, townscape, history and the weather.

Throughout childhood I developed a fascination with the ever-changing sky and the weather. Drawing lead to painting landscapes, coastal subjects and townscapes. A career in cartography enhanced my eye for New Zealand's natural features and the overlaying influences of settlement and interconnecting infrastructure.

I have always been a keen observer of the weather, its constant changes creating the effects of light that are the inspiration for painting. I firmly agree with the English landscape painter, John Constable when he once said "It would be difficult to name a class of landscape in which the sky is not the key note, the standard of scale and the chief organ of sentiment." I keep daily records of weather conditions resulting in a good understanding of skies, clouds and the cycles of change. Wellington has provided endless inspiration, being surrounded by its hills and harbour.

Many of my paintings are completed in the studio, but I also enjoy painting and sketching on location and sharing such occasions with fellow artists. While travelling or on tramping trips I like to carry a sketch pad, pencils and sometimes watercolour as well as a note book, compass and barometer. I am happy going back to familiar places and argue that it's not always to see the same scene. Any subject is unique. The lighting, weather conditions, time of day and season present the subject in the moment of time like a snap shot. 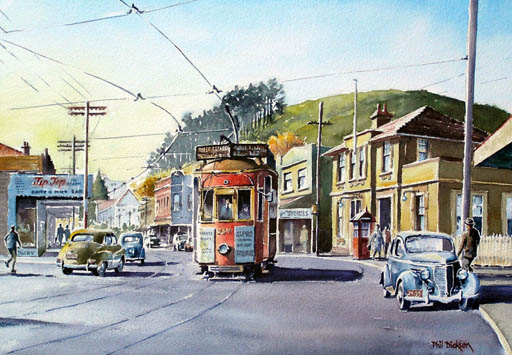 Among the many Wellington subjects I have painted are some featuring familiar locations in the city as they once were years ago, streets around Wellington in years gone by.

Most of the views feature road or rail transport or trams and fashions of their time. Other subjects include vintage vehicles found at classic car runs or field days and shows.

History is eternally dynamic. With age, you experience time spans of several decades. That enables you to extrapolate backwards even further and get a good sense of inter-generational and social change.

I enjoy working from old photographs and other records to enhance the view with the correct vintage of trams, trains and other vehicles of the period. 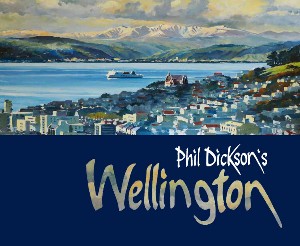 I’d often thought about writing a book. Writing, please note, not painting. Of course illustrating it was always likely. But, like so many daydreams, I’d not got around to it. Apart from anything else, finding a publisher to take me seriously was a daunting prospect, and the thought of self-publishing never appealed. So when one day a man phoned me to say he had just bought one of my paintings and wanted to talk to me, I invited him round.

The painting was of an historic scene on Mt Eden Road in Mt Eden Village and the Mount is clearly in view behind the landmark old Post Office building. As with so many post offices, it is no longer a post office. I had lined up the subject with a view to painting it but before I’d started, found an old black and white photograph of the same view which inspired me to depict the view in history. In it there was a tram heading south, and the makes and vintage of vehicles in the street told me the era of the picture was the early 1950s. The old photo was taken on a cloudy day, so I asked my son Brett who lives nearby to get me a photo in sunlight in late afternoon. Then I set to, rearranging the traffic and pedestrians, and researching Auckland trams so I could bring it further forward in more detail.

The man who bought the watercolour painting was Graham Stewart, a publisher who had originated from Auckland and has been in Wellington now for several decades. He came round, said he was familiar with my artwork and told me he thought there was ‘a book in it’, to use his phrase. He was willing to publish my work if I were to take the project on. So the daydreaming stopped and the real work started. He said that knowing the publishing market the book would have to feature Wellington, and in spite of my penchant for painting historic
subjects, the paintings needed to be mostly present-day scenes.

Where to start? That was the big question. I think Graham thought it would be a book of paintings with perhaps comprehensive captions, but the very idea of assembling enough paintings of Wellington to fill a book didn’t entirely grab me. The promotion of walking tracks he felt was a trend worth pursuing. Slowly the ideas came to me; and writing crept into the mix as I suppose it always had in my daydreams. Why not write first, then illustrate?

So I devised areas of geographic interest, both urban and extra urban and worked them into chapters. I envisaged walking or cycling through each area as in wandering through the landscape describing each as a journey, and adding a few personal stories and references to history. Graham liked the idea, and so it was: a chapter round the harbour, and chapters in the city, suburbs and surrounding hills, Hutt Valley, and into the Rimutakas and Tararuas. But I confined myself to areas I knew well and make no excuses for not being comprehensive of all the areas around Wellington. It is not, and never was going to be a guide book on Wellington’s recreational tracks, rather it is the work of a wandering artist. The final chapter introduces the other vital element of landscape - the weather. There is nothing presumptuous in the writing like ‘how to paint’! Interestingly, choosing a book title was not easy; but as is quite often the case in the publishing business, it was suggested towards the end of the exercise.

There are equal numbers of watercolours and oil paintings and a liberal number of drawings, mostly in pencil. I also included three maps, done by hand in coloured pencil with a digital drape of roads, rail, tracks and names. They are as much works of art as the paintings and drawings. I am constantly frustrated with books containing inadequate maps or indeed often no maps at all.

Incidentally, the old photograph of Mt Eden was taken by Graham Stewart and published in one of his books! I told him I’d used his picture for reference. And despite his reservations about historic paintings, I managed to sneak a few in!