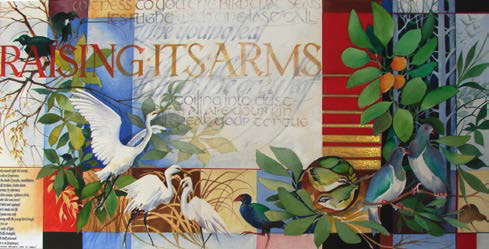 Philip Markham is a full time New Zealand Artist who lives on the Kapiti Coast north of Wellington. His work which covers a wide range of subject matter in all type of media is keenly sought by collectors both in New Zealand and abroad.

He also has wide experience in stage and costume design and has worked on many large opera and ballet productions as well as plays and musicals.

Philip Markham is a versatile artist, skilled in a wide range of media.

A former President of the New Zealand Academy of Fine Arts, he received the Governor General’s Art Award in 2000 for high attainment in painting. John Toft interviewed him at his home on the Kapiti Coast. Philip had what he describes as a fairly rugged upbringing.

Brought up by his grandparents until he was six, he didn’t meet his father until he returned from World War II, psychologically damaged by his wartime experiences. This made the family prone to violence.

As far as art and the finer things of life were concerned, it was an impoverished childhood. However, Philip always felt that there was something better in the world than what he was confronted with day by day.

When he was about 12, Philip experienced a sort of epiphany. He was listening to the Sunday Afternoon Request Session when he heard a sound coming out of the radio that he thought was extraordinary. He listened eagerly over the following weeks until the song was played again. It was Mario Lanza singing ‘Your Tiny Hand is Frozen’ from La Boheme. This experience opened a slight doorway into the world of culture and the Arts.

The door opened further when Philip took a fancy to a girl he met at secondary school. Her parents were very well-to-do and, says Philip, must have wondered what their daughter had dragged in the front door. ‘They were absolutely wonderful to me,’ he recalls.

Their house had paintings on the walls which sparked an interest in art, something he had taken at school simply because there was more leisure time available than in subjects like Maths, ‘So it started there.’

Philip found that when he tried to see her she was always busy. Her mother told him that if he wanted to see her he would have to go to her ballet practice. Philip went along and stood outside the door, ‘a la Billy Elliott,’ he says. The teacher stopped the class and asked him what he wanted. Philip replied that he had come
to watch Vivienne. He was told that if he wanted to stay he would have to come inside and join in.
‘I took to dance like a duck to water,’ he recalls. At seventeen, Philip was a late starter but showed considerable flair. Within a year he was dancing with the New Zealand Ballet. His career then took him to London, where he danced with the Royal Opera Ballet Convent Garden, the Royal Ballet, the Royal Opera and, of course, went to all the art galleries.

Philip realised that if you were a dancer, you had to be out by the age of thirty. ‘I didn’t want to become a tired old ballet teacher so I just continued with my painting.’ After leaving the ballet world he had various fill-in jobs. Then one morning he saw a job advertisement in the newspaper, ‘Art Teacher wanted for Wellington College.’ He had always wanted to be an art teacher so after some prodding from his wife he rang the Headmaster and asked what qualifications were needed.

‘The ability to teach Art to 6th Form level,’ was the reply.
‘I have to tell you I don’t have any formal qualifications.’
‘Can you teach Art?’
‘I’m sure I can teach Art!’
‘Well you’d better come and see me in the morning.’

The Headmaster told him there was a 4th Form class doing Art under a relieving teacher. ‘I’ll take you over there and you cantake over. I’ll wait outside and we’ll see who comes out first.’ But at the end of the lesson no one came out. The class carried on painting through their morning interval. Philip got the job and
went on to become Head of Art. He retired in 1984 to become a full-time painter and designer.

Every time you start a painting, says Philip, you are starting from the beginning again. He quotes the playwright Arthur Miller who, when asked about his work, said ‘Every day I have to go back to the beginning and I have to start again. I don’t know where I’m going and it’s agony but the difference between some of us is we take our agony home with us and teach it how to sing.’ An important lesson, Philip feels, is to accept what you see in front of you: ‘You have to accept what you do and be grateful for it and if it’s not up to your expectations then there’s another piece of paper there.’

He’s never been a fan of the elitist attitude that ‘these are real artists and these aren’t.’ ‘There’s room for everything... if they’re up to standard they should be on the wall, whereas these more extreme pieces don’t find an audience.’ He points out that when he was President of the Academy it was nearly closed down because too many people came to the openings. ‘When you’re trying to become relevant,’ Philip says, ‘you’re in danger of becoming the opposite because you’re appealing to a small number of people who adhere to your ideas. It doesn’t work. People don’t want that.

If they did they’d be buying it. All these elitists thrusting their taste at people, well people simply say “I don’t want it.”’

When Vivian Manthel-French asked him to join the Wellington Watercolour Society Philip hadn’t painted much in watercolour but he soon found out it was quite fun. ‘I find watercolour challenging in that I paint pretty tight but I find watercolour lets me fly loose a bit. Some of the watercolours I do get very tight. I don’t take easily to it. It’s very demanding – you don’t have room for mistakes. You have to be pretty sure of what you’re doing because every step you take you’re getting closer to disaster...With watercolour, once you’ve said it in paint you can’t take it back. The freshness of it, the immediacy of it, the speed of it, is great. That’s
the fun of it.’

A MENTOR TO YOUNG ARTISTS

Over the years, Philip has acted as a mentor to a number of young artists who have sought him out. He never charges for tuition and continues to guide them as long as he feels they are still making
progress.

He recalls the words of his dance teacher, a Dutch Indonesian woman he calls ‘the closest thing to a saint I’ve ever come across.’ ‘At the end of the whole business she took me down to the station and sent me off to Auckland to become a ballet dancer. I hadn’t paid her anything because I didn’t have any money. I said, “I don’t know how I’m going to repay you,” and she said “One day you’ll look down and there’ll be a young person looking up at you. Give it back to them.” 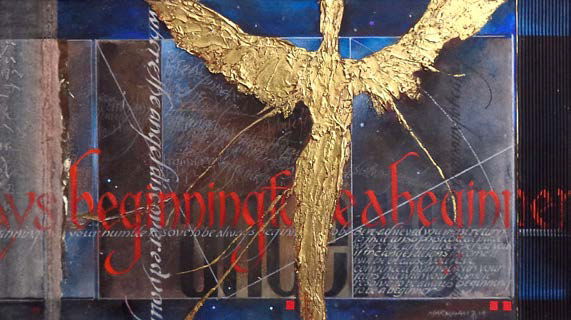 Angelus is one of a series of calligraphic pieces. The paper is Arches 300 gsm cold press. The background is painted in dark watercolour on a layered surface with a little collage on the left hand side for texture. The calligraphic component is largely thin gouache done with both pen and brush. The angel is gold/leaf on a raised surface. The piece was commissioned by a highly respected Australian calligrapher.