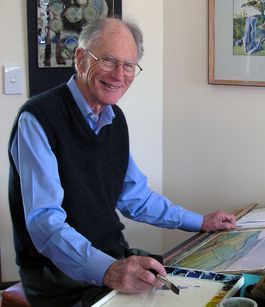 Robin Kay is one of New Zealand’s foremost watercolourists. He had been an artist member of the Academy since 1938, serving for twenty-one years on the Academy Council, including eleven years as vice-president; a member of Watercolour New Zealand since it was founded in 1975.

Between 1962 and 1970, he won 1st prize, 2nd prize and six merit awards for watercolour in the National Bank Art Awards.

His paintings have been purchased by the National Art Gallery, Archives New Zealand, the Turnbull Library, US President Lyndon B. Johnson, Prime Minister Keith Holyoake and former Governor-Generals.

Robin’s association with watercolour began at the age of 10 when he won a competition sponsored by the English magazine, Meccano. The prize was a set of Winsor & Newton artist quality watercolours and a block of watercolour paper. While still in his teens, Robin and a couple of friends went on weekend painting trips with Eric Gully (great-grandson of John Gully) who gave him private tuition in watercolour. In his final year at Christ’s College, Robin attended painting and drawing classes at the Canterbury University College of Arts where two of his classmates were Austen Deans and Bill Sutton.

An exhibition of Robin’s watercolours of the Middle East was held in Wellington in 1942. His wartime paintings were featured in a 1943 touring exhibition in New Zealand, New Zealand Artists in Uniform and in the Artists in Uniform exhibition held at the National Art Gallery in 1944. In 1943 the 2NZEF Public Relations Chief Archivist had sent him out into the Western Desert to paint the places where the New Zealand Division had been in action. These paintings are held by Archives New Zealand in the National War Art Collection. Other wartime paintings by Robin are held in the Alexander Turnbull Library collection.

After his return to New Zealand in 1944, Robin Kay became an official historian with the War History Branch of the Department of Internal Affairs. He edited several official histories. He wrote the histories of the 2nd New Zealand Division in Italy, the New Zealand Machine Gun Battalion and the Long Range Desert Group. 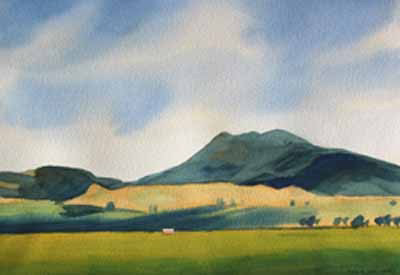 Throughout his career, Robin has remained primarily a watercolour painter. He tried oils but didn’t like them (“I didn’t like the smell of turps”). He worked in acrylics for a while, but found they lacked the transparency of watercolours. Robin enjoyed lithography but recalls that he used to get in an awful mess with the inks. On one occasion, he accidentally sat down in his ink and was literally caught with his pants down when his neighbour’s wife called.

Initially, Robin painted on location. He maintains that, at this time, family holidays were also painting holidays but his daughter Rachel says it was the other way round. “Dad would always want to go painting in an area which was beyond the black stump and the family would tag along. He always felt there would be a better vista over the hill.” In those days the journeys were much more dramatic with a family of four and all their gear crammed into a Ford Prefect travelling over rough gravel roads. Robin’s favourite areas for painting are Tongaporutu in North Taranaki, Castlepoint and Eastern Bay of Plenty.

Robin relates that his father used to get angry with him because he made the colours in his paintings stronger and darker than they really were (“I still paint like that.”) This was because Robin wore Polaroid sunglasses when he painted outdoors. Robin’s father also disliked him painting old burnt tree stumps, which he regarded as scenes of destruction, belonging to the past. Robin’s grandparents destroyed stands of native bush on Bank’s Peninsula, so he puts this down to residual guilt on his father’s part.

Later, when colour prints came in, Robin started using photos for colour reference and did most of his paintings in the studio from photographs or from little sketches done on the spot worked up from thumbnails.

Robin’s advice to watercolour painters is to keep it fresh. The first wash is the most brilliant and any additional wash is inclined to make the colour muddier. If you don’t get it right the first time, it’s better to start again rather than try to correct it.

He stresses the importance of design in producing a successful painting. Robin does a number of small drawings to get the composition right, eliminating detail unless it’s essential. He feels that you should look for design in the subject rather than just pictorial representation. 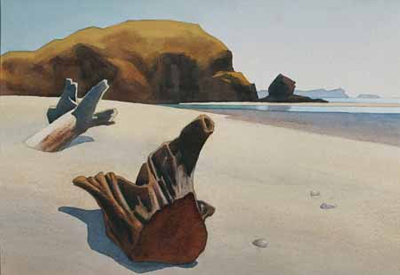 Robin paints on Arches paper which he always stretches first. He uses Winsor & Newton paints: French ultramarine; cobalt blue; cerulean blue, which produces nice greys; “a lot of yellow ochre”; viridian “sometimes”; aureolin; alizarin crimson and Venetian red. His greens are usually mixed from Winsor blue, which he uses a lot. He tries to avoid using browns. Robin tends to use large flat brushes rather than rounds and regards a hair drier as essential. These days he paints from large colour prints to compensate for older eyes or from a computer monitor on his work table.

According to Robin’s daughter Rachel, “The trouble with Dad is that he’s painted a lot of very lovely paintings and he’s gone and sold them all.” Robin regrets selling a number of his paintings but takes some consolation from the hope that they have given pleasure to the people who bought them.