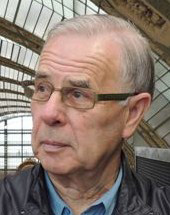 Ted Sherwen is one of New Zealand’s top watercolourists. His paintings were featured last year in an exhibition of New Zealand art in New York.

Ted grew up in a working class tenement in post-war Glasgow. He inherited his drawing ability from his father, a very good amateur watercolourist. His artistic talent was to be Ted’s ticket out of the tenements.

Because money was needed in the household, Ted left school before he was 15, landing a job in the art room of a big publisher. He worked with about a dozen other artists, attending design and lithographic drawing classes one day a week at the Glasgow School of Art. At the start of the third year of his apprenticeship Ted, as usual, handed over his wage packet to his mother who gave him ten shillings for living expenses. A hushed discussion between his parents followed. Ted realised that he was now earning more than his father, a highly skilled carpenter.

Two of the artists he worked with were very good watercolourists. Ted learned by watching them paint: "the watercolour I just responded to". 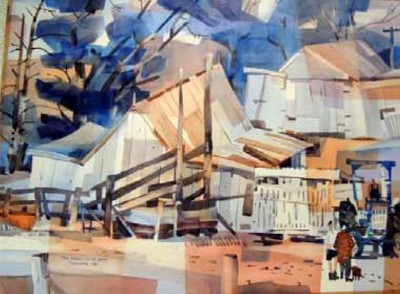 Although he entered the odd watercolour in exhibitions, with a wife and two young daughters to support Ted was more concerned with paying the building society than exhibiting paintings. Ted gives his wife Anne credit for encouraging his interest in watercolour.

After they came to New Zealand in 1974, she urged him to build a studio at their Takapuna home and drew his attention to a book by Californian watercolourist Rex Brandt, who would strongly influence Ted’s artistic
development.

Ted began corresponding with Brandt then, in 1978, travelled to California for a two week workshop. He made an annual pilgrimage to California to attend Brandt’s workshops for another ten years. Brandt emphasised the language of painting, ways of representing the object by making a little say a lot. He underlined the importance of white paper, preferably painted around and set great store on edge hierarchy.

"It’s the edges that sell your paintings if you’ve got the values right", says Ted.

The eye sees a hard edge before it sees a rough edge before it sees a soft edge. Brandt was also a great man for gradation. “The eye loves gradation”, Ted maintains. Brandt taught that the artist must direct the viewer’s eye, which is attracted to light-dark contrast, hard edges and linked whites. He was very good at demonstrating what he was talking about. 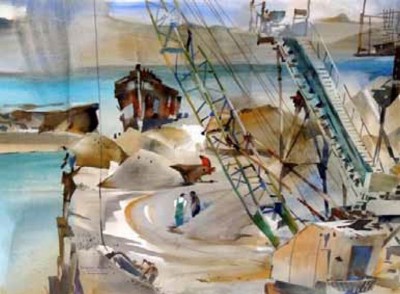 A studio painter, Ted uses photographs and drawings done on location for reference. “Very rarely do I go anywhere I don’t draw. But I don’t have the time to gather my thoughts to get the painting I want.” He
emphasises the importance of drawing, quoting the French artist and teacher Andre Lhote: “It is impossible to paint without drawing, because drawing is a system of reserving a place for colour in advance”. Ted does pencil studies to work out composition and tone, followed by a 6”x4” trial painting. A careful drawing is then transferred onto watercolour paper before the painting is begun.

Ted recommends the largest brush you can comfortably handle for a given image to avoid the tendency to niggle. His favourite all-round brush is a 2” flat. The paint should be applied, allowed to settle, and then be left alone so that the colours meld on the paper. It is very important, but incredibly difficult, not to lose the white paper. Attention to edges is also vital. “Watercolour is control of water – how wet is wet?” Using the correct consistency of pigment and knowing the right time to apply it is learned through experience and “lots and lots of sponges that don’t rise.”

Watercolour is definitely a minimalist medium, says Ted. Consequently you are better using five colours than fifteen. Ted’s palette is based on cool-warm contrast. He recommends that watercolour painters investigate the results that can be achieved with the Velasquez palette (ultramarine or black, yellow ochre and burnt sienna) on the one hand and a high key palette (ultramarine, cadmium yellow pale and alizarin crimson) on the other. A limited palette gives your paintings unity.

Ted frowns when he watches weekend watercolourists painting the little house on the prairie using yellow ochre, sage green, a grey-blue sky and a bit of drab brown. “They are missing out on the potential of watercolour and saturated colour.”

Ted, who taught colour theory at the Glasgow School of Printing, has some practical advice on colour. Cobalt blue combines beautifully with permanent rose or alizarin crimson to get purples. You need either raw sienna or yellow ochre.

He particularly recommends manganese blue, a cool granulating colour. Thalo (Winsor) green with lemon or cadmium yellow gives stunning greens. He has no hang-ups about using white, “It’s just not transparent watercolour.” Black may be used for shading, but must be used tastefully. Stunning dove greys can be mixed from black and white. Adding yellow ochre to cobalt blue and alizarin gives another stunning watercolour grey.

Ted’s last piece of advice to aspiring watercolourists is don’t get impatient with yourself: you’re not going to be Picasso in a fortnight. Be patient. Stick at it. Practice your shapes. The eye is delighted by effective shapes and judicious use of effective detail. Practice putting on your coats of paint then leave it alone. 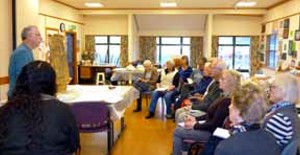 Twelve members came from as far away as Blenheim, Hokitika and the Wairarapa to join together at Karori Arts Centre in early June to learn from Ted Sherwen. He has a wealth of knowledge and experience which he was happy to share. He took us through a considerable amount of theory and also demonstrated various skills.

One of his sayings is “if you can’t cut it, don’t paint it”. In other words don’t put in too much detail. Another comment I’ve taken to heart is - when using calligraphy marks at the end of your painting make them only one tone darker or lighter than the surface you are putting it on, otherwise they stand out too much.

It was good to get amongst a group of keen water colourists and to feel part of the organisation.

While in Wellington I took the opportunity to have a look at Ted’s exhibition in Thorndon and also to visit the Lower Hutt Odlin Gallery where a lot of local watercolour painters were exhibiting.