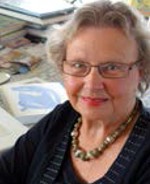 Vivian Manthel-French is an Elected Artist Member of the New Zealand Academy of Fine Arts and former president of the Wellington Watercolour Society, which later became Watercolour New Zealand. For a period of about 20 years, Vivian spent six months of each year in London, where she exhibited at the RWS, held solo exhibitions at New Zealand House and was chosen to hold a solo exhibition at the Commonwealth Institute. Vivian exhibits at the Academy, the Millwood Gallery and with Watercolour New Zealand. John Toft interviewed her at her home overlooking Raumati Beach on the Kapiti Coast.

From the age of 10, Vivian attended weekend art classes at Wellington Technical College, where she later did her Fine Arts Preliminary. She wanted to go on to art school, but her father was against it. “In those days you did what you were told,” says Vivian ruefully, so she went to work for an advertising agency. Vivian hated commercial art but kept up her painting with the Wellington Art Club.

At the age of 19, she submitted one of her paintings to the Academy and had it accepted. She eventually became an Elected Artist Member.

After becoming a mother, Vivian became particularly keen on painting watercolour portraits of children. The Portrait Gallery later did a retrospective of these works. Next, Vivian started painting landscapes, always done on the spot.

“Freddy Ellis (head of the Wellington Technical College Art School) was a huge influence on me. It was the John Singer Sargent days, impressionist painting, fresh painting, and that sort of look has stayed
with me ever since.” 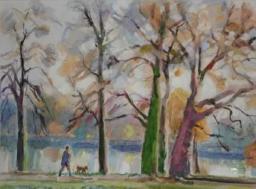 These days Vivian usually paints in the studio. She sketches outside, mainly with pastel, or draws with a bit of charcoal. She never uses pencil, which she finds too restricting and too thin. “I love drawing and line, I love it...I think watercolour with line is a lovely combination. It gives vigour and variety to the picture.” Vivian also takes photos for reference.

“I might not even look at it, but I know I have it up my sleeve.” If she’s putting people in her paintings, she always photographs them because they don’t stay still. A photo reference is useful because she wants her painting to express their character, their body language and how they feel.

For Vivian, the subject almost chooses itself. She looks at it and says “I have to paint you... It could be anything, really. It could be a bucket sitting in the garage or something. I won’t paint anything unless I really feel that urge to paint it.’

Vivian likes to work on hot pressed paper. Composition is the first thing she thinks about. Colour is important - Vivian regards herself as a colourist rather than a tonal painter - but she considers composition to be equally if not more important because she is interested in the abstract shape of the painting.

She draws in pastel first, very lightly, so that when she starts to paint she can move it around and change it. “That’s how I find my shape.” She thinks about how the warms and cools will work together, but “If there’s a colour in the painting that I find wildly gorgeous I usually put it in first then work the painting around it.” Vivian gets her darks in place early in order to get her pattern worked out. She paints wet on dry, sometimes wetting portions of the paper to achieve happy accidents. Vivian finds “When you get to a certain stage of the painting it has a mind of its own, it starts to lead you. You say ‘The painting needs this, the painting needs that.’”

She believes she knows when to stop, but that didn’t prevent her husband telling her ”Stop tweaking it!” But Vivian maintains that the painting is her little baby and she wants it to be perfectly dressed. 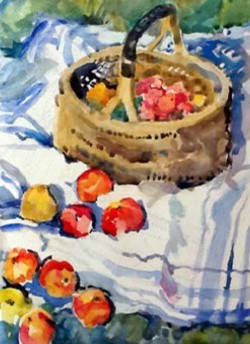 "Windfalls and Raspberries" by Vivian Manthel-French

Vivian used to be very much an impressionist painter, using pure watercolour - “I still love that”- but she has now gravitated to mixed media.

She says that if you’re creating a painting in the studio it’s too hard when you rely entirely on pure watercolour. “You can’t get it dead right straight away. You need to have the ability to correct and enhance the painting using gouache, ink or pastel.”

She would like to get into painting very structured compositions that take her away from the subject. “I don’t want to entirely lose the subject, but I want to push it and the more I can push it the happier I will be... I like to have a foot in realism. I want people to look at the painting and know what it is and to be able to finish it off in their own minds but I’ve put in the markers, I’ve put in the signals for them.”

Vivian’s advice to aspiring painters is to keep on painting. She recalls what Fred Ellis told her when she was about 11 years old. “I said to him ‘Mr Ellis who do you think is going to be the best artist in the class,’ hoping he was going to say me. He looked down at me and said, ‘The one who paints the most.’ If you have the passion to paint a lot you’ll get there.”