Peter joined the New Zealand Academy of Fine Arts in the late 1950s and exhibited alongside the top artists of that era. He has been an elected artist member of the Academy since 1961. In 1965 his work featured in the 100 New Zealand Painters exhibition, which toured the country. In 1988 Peter won the IBM Art Award for painting. In 1996, 1998 and 2000 his paintings were selected for the prestigious Mexico International Watercolour Biennial held at the Museo Nacional de la Acuarela in Mexico City. He is one of 30 artists featured in Denis Robinson’s book, New Zealand in Watercolour. In 2010, his painting Nature’s Revenge; the Tsunami was selected for the Beijing Biennial and subsequently acquired for the National Art Museum of China. John Toft, who has fond memories of attending Peter’s Saturday morning art classes for children nearly 60 years ago, interviewed him at his home in the Wellington suburb of Hataitai.

Peter Coates’ passion for art dates from an early age. His Standard 4 teacher wrote on his end of year report “Owing to a bias for Art, Peter is inclined to disregard other subjects as unimportant and consequently his Arithmetic suffers, largely through inaccuracies and lack of interest. Art is still curbing Peter’s progress in other subjects.”

Art was in Peter’s family. His great grandfather drew and his grandmother painted in both oils and watercolours. “It’s quite nice to feel that you’re part of a tradition,” says Peter. That tradition is carried on by his children: his son is a designer and both his daughter and his son got graphic arts degrees from Massey. 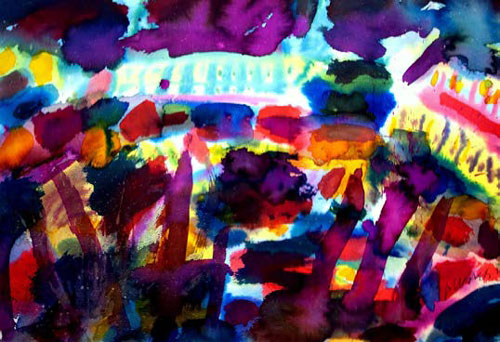 Peter was lucky in that his father worked for Williamson Jeffrey, who imported Rowney paints as well as brushes and papers. His birthday presents were boxes of paints together with the paper and brushes the budding artist needed to develop his understanding of watercolour.

‘Watercolour for me is the grand New Zealand medium for artists,’ says Peter. He points out that the early explorers brought artists with them on their voyages. They were followed by people like Heaphy, who were associated with the military.

Peter’s parents lectured him constantly about the impossibility of making a living from art. Influenced by his brother, who was attendingWellington Teachers’ College, he resolved to become a teacher.

Thus began a lifelong interest in education and the philosophy of teaching. At Wellington Teachers’ College, his talent was recognised by art lecturers like John Drawbridge and Doreen Blumhardt: ‘All you need is for one or two people to say that they like your work and of course the encouragement came from them.’

In teaching art to children, Peter would bring a child from an infant class into his room and get them to draw a tree. It was often very primitive, maybe a circle with a line as a trunk. He would then make a list of questions that forced the child to observe the detail of the tree. The child was then asked to do another tree and this resulted in a drawing full of detail and new knowledge. ‘I said afterwards “I didn’t show you how to do that, did I? How do you think you learned?” They learned by observation and that’s the key to all art – you are observing something and you are changing it or recording it accordingto your feelings....You haven’t taught them how to draw, you’ve taught them how to observe and that’s one of the great things about it really, because no matter what they do – whether they’re playing rugby or cooking – observation is an absolutely key element.’

The basis of creating satisfying symbols in art, says Peter, is observation of both the visual reality and the personal feelings involved with that reality. He quotes Barry Brickell who said ‘There’s no such thing as bad art, only boring art.’ Boring art, Peter maintains, is art where the artist has lacked passion. ‘Passion is a part of the way that I paint.

If you can see the structure and the size of my paintings you can see that I paint with passion.... If I don’t feel something about the subject, I don’t paint it. It’s the feeling that drives the way I paint. If I don’t get the feeling of the place my hands won’t move properly and I’ll end up with a boring painting. And I’ve painted boring paintings. Everybody does.... I’ve got piles of old paintings that will end up being burnt somewhere. Everybody has.’ 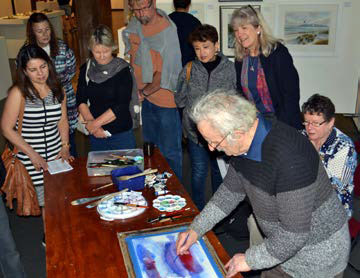 Peter says his style has evolved through his love of calligraphy: ‘I see all the strokes in a painting as being calligraphy and you paint according to the way your hands move and your arms move. Some people get pleasure out of little movements and tiny details, some people move their hands. I’m a mover of hands. I learned it from stage painting because you paint big.’

The problem facing the professional artist, according to Peter, is that to some degree artists have to paint to sell but they also have to get pleasure from what they do. ‘It’s a very difficult thing to get the balance right .... Our audience tends to be conservative and if you want to grow as an artist you can’t afford to be conservative. You’re very lucky if you can paint what you want to paint and people will buy it. That is the optimum and there are certain artists who can survive in that way but it’s a very difficult road.’ 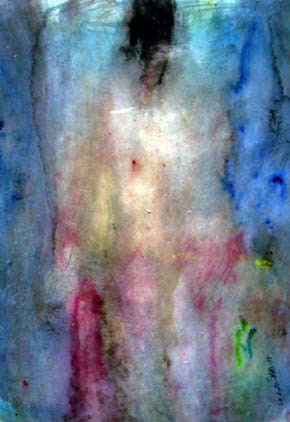 These days, Peter feels that his paintings are probably selling better then they have at any time in the past. ‘I’d like to believe that the audience would like a little bit of me on their walls and each time they walk past it they’ll think “Oh well, there’s Peter Coates in this house and I’m glad he’s on the wall.”’

Peter has this advice for aspiring artists: ‘Persevere. If you want to really be a painter you’ve got to feel that you’re going to be kicked in the butt regularly. Every now and again you’ll feel you’re being ignored. You’ve just got to persevere and you’ve got to have a passion... All the
great painters I’ve ever read all say the same thing: don’t get caught up in technique. I would say technique is the servant of the artist rather than the master. If technique becomes the master you may as well give up because if you’re searching for technique you end up copying someone else and you never end up making it your own... A beginner will tend to think that if their technique is good then they’re a good painter. But they’re only a good painter if they’re using their technique to say something and if they’re saying something that’s boring then it’s not art. Simple, but very hard to do.’

One of the great pitfalls in painting, Peter says, is that people tend to get to a certain stage in their growth and then continue to paint the same subject matter in the same way.

‘I would like to see a New Zealand painter who forced me to observe something differently.’

My current work in Watercolour 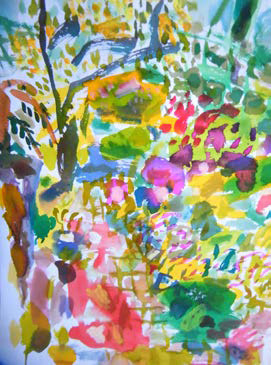 These pictures are a series of studies I have made in watercolour of my home garden. This year the colour in my garden has been amazing and I have been inspired to capture the blocks of colour by simplification, using my large Chinese brushes. Observing with eyes half shut helps me forget detail and concentrate on key colour elements only. I have learned this from the work of the masters - Turner, Monet and Matisse.

At the age of 81 I have to use what physical energy I have carefully. I am more energetic at the edges of the day, early morning and late in the day, the time when angled light and shadow give the landscape
more dimension. My work is a reaction to the huge paintings I see of detailed flowers which tend to bore me.

Carrying heavy equipment is becoming difficult so I am glad for subjects close to home. It is important for the artist to find material they feel passionately about and my home, where I have lived all my
life, is that kind of place for me. When searching for subject matter we tend to forget that home and family are a universal experience and emotionally important to us all.