Working on The Hobbit: painting in two scales 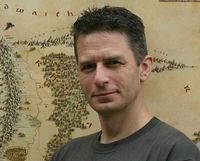 Paradoxically, since becoming a professional freelance artist in 2001, Daniel has found less time than before to actually paint pictures, due to the demand for his work in his many art-related areas such as calligraphy, maps, movie props, typography, commercial art, graphic design, and private commissions.

There were many artists working on The Hobbit trilogy of films: conceptual artists came up with visions of how things would look, many prop designers were artists in their own right, there were digital artists using computers, there were sculptors, fabric artists, costume makers and set designers.

But my role was that of Graphic Artist - creating the actual, physical artwork that the camera ‘sees’; the things that end up on the big screen itself. For this project that included calligraphy, books, inscriptions, maps, scrolls, parchments, titles, main credits, drawings, illustrations and paintings.

At the time of writing this article, there are still many things I can’t reveal (because the second and third films are not yet released, nor any of the extended DVDs), but I can write about some paintings.... 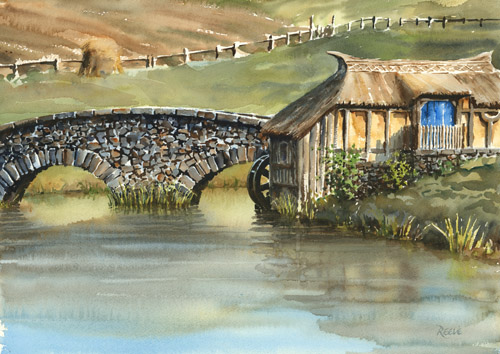 Bag End (the name of Bilbo the hobbit’s beautiful home) needed to be decorated; it needed to look as if it had been lived in for many years. So I created loads of documents and letters to scatter about the place, labels for jars and bottles and barrels, and, to hang on the walls, some framed poems, a couple of calendars, a family tree, maps, plans, and also some paintings: two watercolours and an acrylic (painted to look like an oil painting).

No problem... except that the Bag End set was created in two different scales – a large one where hobbits and dwarfs appeared to be the correct size in their surroundings, and a small one where human - sized characters (Gandalf) would look the correct size. (And then digital movie - making tricks would seamlessly blend the two.) So everything created for the large set had to be re-created in a smaller size for the small set –
including my paintings.

I began with the first watercolour, stretching two pieces of paper in their appropriate sizes. I then drafted and painted the two paintings at the same time – everything I did to one I would immediately do to the other (it sounds easy, but it’s actually quite difficult). It was a Hobbiton landscape scene: hobbit holes beside a lake, looking across the water to the local inn. The result was actually very good: two original paintings, pretty much identical in every respect except size.

Next I tried a ‘mock’ oil painting – using acrylic in an oil-painting style. I decided on a subject close to every hobbit’s heart: food! Mushrooms, onions, a bottle of wine - just what every hobbit pantry needs. This is the only example where I have a record of both sizes of paintings; as you can see, they came out quite similar to each other.

The third painting was another watercolour, this time using a limited palette of three colours (partly to reduce the complexity of painting in two scales!).

The paintings were hung in their appropriate spots in the two sets. In a crime against art, both of the watercolours had to be dusted and dirtied with brown chalk to reduce their brightness, otherwise they ‘popped’ out too glaringly in the 3D cameras!

As always when making films, you create much more than is actually seen in the final cut. The first watercolour is visible in a number of scenes, but I have yet to see the other two on the big screen. Still, we might see some more of Bag End in the third film, and there will also be extended editions of all the films - so we may see them yet.