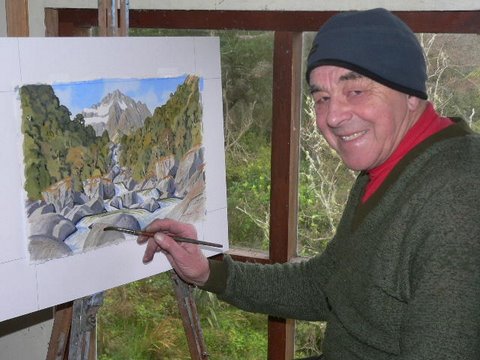 A team of Watercolour New Zealand members is interviewing the revered older artists among our members. John Rundle has been a generous supporter of our society, volunteering to hang paintings for exhibitions, to write for the newsletter, select and judge ... whatever we request. Sue Wild spent a delightful afternoon talking with John about his life as an artist. 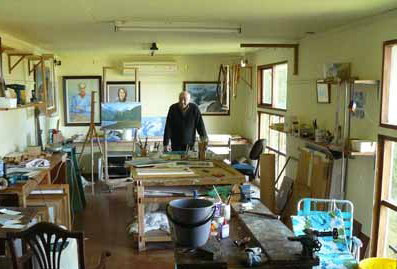 "We were camped in the Waimakiriri River and woke to a clear, fresh morning. My son emerged from his tent and exclaimed “It’s like living in a painting. Dad makes them so real!” That was a special moment for John, whose life centres on three passions: the mountains, photography and painting.

John’s career in photography began when he borrowed his brother’s camera to take on an alpine crossing of O’Leary’s Pass in the head of the Dart River. He gained a sound training in photography, working for Denis Hodson, “one of the best photographers.”

At that time most people began painting using the watercolour medium which, says John, is “ridiculous – it’s the master’s medium”.

About 1957, when working for National Publicity, John showed one of his paintings to the Director, Alan Collins. Alan used an hour of government time to give John advice that he heeds to this day. “That hour was the only lesson I have ever had and I owe any success I have had as an artist to Alan. John and Alan are still painting friends.

John knew the work of Austen Deans, Peter McIntyre, Don Neilson (“a master of colour”) and Ted Lattey. “To be able to paint like them seemed an unattainable dream.” However, John’s work began to get hung in the New Zealand Academy of Fine Arts and to attract awards. John pays tribute to Guy Ngan, as a “dynamic and professional” Director of the Academy. The ANZ Bank purchased many of John’s watercolours.

"An artist shouldn’t be dominated by materials. He should be the master." John uses Arches 300gsm paper, preferring rough as it makes his “rather detailed” work more grainy.

“Brushes - I have everything from a Kalinsky sable to humble nylon brushes." His favourite colours are ultramarine, burnt sienna and yellow ochre - “a superb colour”. 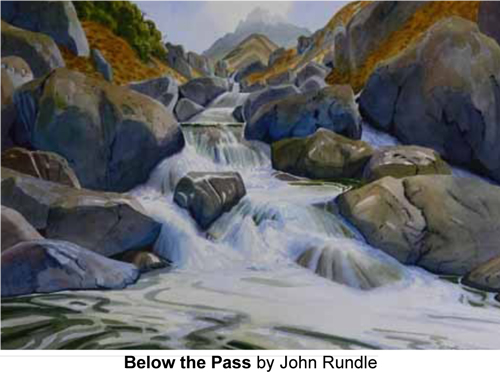 John tells of sitting on a rock promontory high in the Murchison Valley, painting a mountain and trying to get the correct shadow colour. “I tried all three blues but it was not right. Then I tried adding red to the blue and it was immediately right.”

John loves to paint very remote places, impossible to access with a load of painting equipment. He takes photos and sketches. However he doesn’t want to be limited by what is on site. He likes to compose the painting and include plants and trees that grow in that area. He “tells lies” to make the composition work and gets pleasure when someone who knows the area well is fooled by into ‘remembering’ what John has invented. "Good composition is vital to painting. A photographer must learn composition, but many artists feel that skill in composition will descend from above."


We were saddened to learn of the death of John Rundle on February 24th, 2015 at the age of eighty. 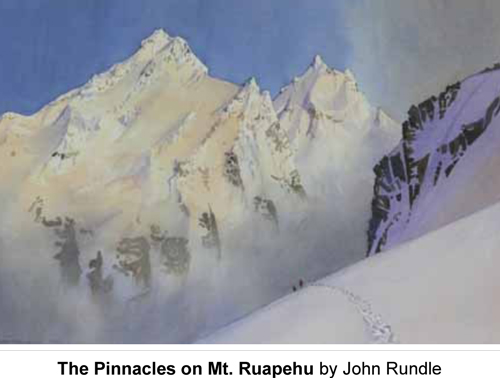 John was a foundation member of Watercolour New Zealand and an elected artist member of the New Zealand Academy of Fine Arts. He was guest artist with Phil Dickson at our 2010 Splash exhibition and won both a merit award and a special prize for watercolour in the National Bank Art Awards.

John’s passions in life were tramping, photography and painting. His paintings of the mountains and the New Zealand bush were in the tradition of Austen Deans and E.B.Lattey. In the opinion of committee member John McDonnell, “He was the best at what he did.”


Memorial exhibition of John’s work was held at Alfred Memelink’s Artspace in March 2015.