If you ask any watercolour artist around the world what they think of watercolour painting I bet you'll never get an answer anywhere close to how our Alan Collins describes his love of the medium. If you happened to watch TV One's 7 Sharp recently, you might have caught Alan answering with "I think watercolour is just about the most exciting thing you can do with your clothes on." This classic response typifies Alan who is 90 this month. It is his amazing spirit and the love he shares with his wife, Sally, that keeps him 20 years younger than his years. He is an example to us all. 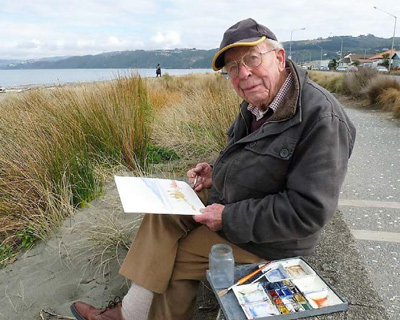 Alan has over three quarters of a century of art behind him. He was born in Wellington way back in 1926 and learned to paint before he could read and write. He studied at the Wellington Technical College School of Art, before becoming an artist with National Publicity studios. Later he became Director and then Manager. During a stint working in London as an illustrator, he met a lovely English girl whom he proposed to, promising to settle and raise a family in Eastbourne by the sea. Sally was very excited by the prospect and said 'yes'.

However, Alan hadn’t specified which Eastbourne and that it would be the one half way round the world, in New Zealand, not the one just down the road from London. Fortunately Sally was happy with his choice and fell in love with their Eastbourne seaside home. They have been very happily married ever since and still live by the sea.

Alan has amazing ability with the challenging medium of watercolour together with a sound understanding of the colours of the New Zealand landscape.

Recently he painted 30 works for a solo exhibition at Memelink Artspace in Petone, painted mostly ‘en plein air’. He loves to find a unique scene and go out in any weather to capture it, bracing himself against a post to fight the wind which tries to whip his board and palette away.

By John Toft
When interviewed by WNZ recently, John Rundle attributed any success he has had as an artist to a one hour lesson from Alan Collins. Alan, who has been painting watercolours for over 80 years, says “Watercolour now to me has a much greater challenge because having done so many for so long, I’m almost beginning to know how to control the damn thing. It’s a fickle medium.” Alan is an entertaining raconteur who admits he likes to reminisce. John Toft interviewed him at his Eastbourne home as part of WNZ’s oral history project.

Alan began drawing and painting before he could write his own name. Everything he saw, he drew or painted: “Nobody taught me how to draw or paint. It was there and I did it.” Writing proved more of a problem, however. At Muritai School, he was thrashed every day by the headmaster because of an inability to spell. Alan later discovered he was dyslexic. On the positive side, his class teacher showed him how to lay a watercolour wash and arranged for him to attend Saturday morning painting classes at Wellington Technical College taught by Reg Waghorn, “a great watercolourist”. This was Alan’s first formal art training.

His father eventually moved Alan to Thorndon School. “There my education began and the painting I did was appreciated.” At the start of World War II, Alan went to Wellington Technical College School of Art, “a marvellous school”. In 1943, he was awarded an art scholarship but the following year his father suggested he try to get an art job rather than wait and have to compete with a flood of returning ex-servicemen. Alan’s father was an importer of wine and spirits. One of his customers was in charge of the photographic and art section of National Publicity Studios. Alan had his job and eventually worked his way up to become Director.
Initially, he worked alongside Marcus King, “a brilliant artist”. To this day, Alan uses the colours King recommended: cadmium yellow, cadmium red, alizarin crimson, Winsor blue, ultramarine, cobalt blue, viridian, yellow ochre and burnt sienna. Any other colours are superfluous, he says.

Alan’s grandfather used to take him to Academy exhibitions at a very early age, which he feels gave him an appreciation of painting. In time, Alan became an elected artist member. He fondly recalls the glory days when the NZAFA spring show was the social calendar event of the year. Initially, Alan put off joining Watercolour New Zealand but was bowled over when he attended an opening night at Shed 11. “I had never been to such a crowded place where everyone was so enthusiastic since the Buckle Street days of the Academy. The quality of the paintings filled me with inspiration.” Alan wrote out a cheque there and then.

He painted in a variety of media but once Alan retired and started travelling overseas with his wife Sally, he began concentrating on watercolour and has stuck with it ever since. Alan describes himself as “a paint-on-the-spot person” and found watercolours much more portable than oils.

Alan’s watercolour hero was Nugent Welch, a painting companion of his uncle, W.S. Wauchop. He is the proud owner of three Nugent Welch originals and one of his most prized pieces of memorabilia is Nugent Welch’s paper stretcher. Alan is also partial to collecting watercolour boxes, “the way Imelda Marcos collects shoes.” He believes in painting on location rather than in the studio. Alan disapproves of painting from photographs and gleefully relates how he upset his friend Peter McIntyre at an exhibition of his paintings of Antarctica by telling him “Peter, thank God you’ve left Kodachrome alone and gone over to Ektachrome!” Nevertheless, Alan admired McIntyre’s work tremendously “They were more than paintings, they were knockouts.”

Alan uses Arches 640gsm paper because it doesn’t need stretching. He dispenses with an easel or a board, holding the paper with one hand and painting with the other. Plein air painters must be able to draw well, he believes. They must also be able to cope with limited time, inclement conditions and Alan’s pet hate, “damned spectators.” He recalls how his painting pal, the late Peter Read, used to keep then at bay by flicking a large mop brush loaded with Winsor or cerulean blue.

When he’s painting outdoors, Alan first makes a careful, accurate drawing. Mindful that the light is changing, he tries to anticipate what will happen. If he feels the painting isn’t working, he abandons it. Watercolour painting can be a nerve-wracking business. If the painting is going well, Alan tells himself, “Thank God, now don’t muck it up.” Sometimes, when the painting is nearing completion, he gets almost scared to do any more for fear of ruining his work and thinks “come on, get a hold of yourself!” The great watercolourist John Singer Sargent, himself a confirmed plein air painter, called painting a watercolour “making the best of an emergency.” Painting on location is not for the faint-hearted.

Alan stresses the importance of careful observation of the subject. His favourite tip for the aspiring artist is “Draw or paint what you see, not what you think you know.” He has been painting watercolours since 1930 but still regards it as a great challenge: “To haul off a good watercolour is one of the most exciting things I know.”

Alan concedes that his style hasn’t changed much over the years: “When I start painting abstracts, I shall have someone put me down!”