“That most paintable of all colours - white” 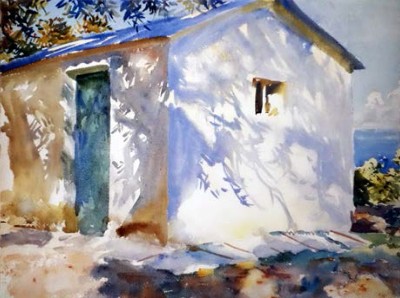 Well-known New Zealand artist Peter McIntyre’s favourite area to paint was the North Island’s Rangitikei River. He wrote “always there has been delight in painting those lovely cliffs that are that most paintable of all colours – white.”

Two works by the great watercolour artist John Singer Sargent, Corfu: Lights and Shadow and La Biancheria are striking examples of paintings whose impact depends on their areas of white. Sargent’s love of making a subject out of white had manifested itself early in his career, in oils as well as in watercolours.


The English poet Edmund Gosse described Sargent’s approach to plein air painting as follows: “He was accustomed to emerge from the house carrying a large easel, to advance a little way into the open, and then suddenly to plant himself down nowhere in particular, behind a barn, opposite a wall, in the middle of a field. The process was like a game of musical chairs... His object was to acquire the habit of reproducing precisely whatever met his vision....” 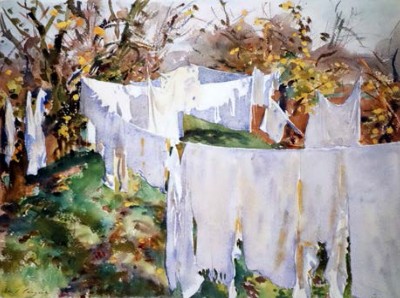 Sargent described his watercolours as “snapshots.” Both of these paintings are snapshots of light effects that caught the artist’s eye. In Corfu: Lights and Shadow, painted in 1909, it is the contrasting interplay of the shadows cast by the trees and the whitewashed walls of the house. Sargent was fascinated by the effects of indirect and reflected light. Australian watercolour artist Greg Allen, in workshops conducted for Watercolour New Zealand, recommended studying Sargent’s paintings to learn how to paint reflected light. Look at the way, in this painting, Sargent has painted the reflected light under the eaves and inside the window frame.

In La Biancheria, painted in Italy in 1910, Sargent makes a striking painting out of an unglamorous subject: white sheets drying on a clothesline.


An American critic wrote “But for someone whose favourite theme had always been the rendering of white against white, the sight of laundry hanging on a line must have been irresistible.” It’s a measure of Sargent’s mastery that he even manages to suggest that the sheets in the foreground are still wet whereas those in the background have dried. La Biancheria is one of Sargent’s most frequently exhibited watercolours and many artists have since painted similar subjects.

The French impressionist painter Camille Pissarro wrote “Blessed are they who see beautiful things in humble places where other people see nothing.”

Both these paintings are object lessons in how a great artist’s vision can make seemingly mundane subject matter into a successful painting.