There is a moment when a loaded paintbrush first touches a dampened sheet of white paper... that every watercolour artist knows well. And none more so than James Fletcher-Watson, founder of the Pure Watercolour Society. He made watercolour his life-long passion and believed in traditional methods, using pure, transparent washes.

Today the Pure Watercolour Society is a thriving and muchloved organisation with the Fletcher-Watson family at its heart, supported by a worldwide community of professional and student artists and friends.

His great friend, Australian artist Robert Wade, says “James Fletcher-Watson, or ‘Gentleman Jim’ as I often called him, personified the gentle art of watercolour. A traditionalist to the core, he painted in the manner that he loved, never bending to fashion, or trends for smart techniques. He did it with an enormous love and respect for the medium which brought so much joy to his followers.”

We look at James Fletcher-Watson’s life, his inspiration and practice…and meet some of the people who continue his great passion and vision. 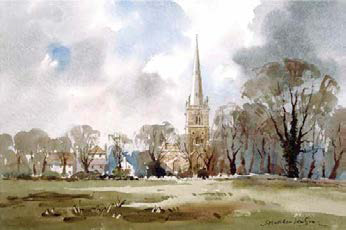 James was born into a family with a strong watercolour heritage.

His mother was a watercolour artist. His grandfather, Pilfold Fletcher-Watson, was an architect and professional
watercolourist who emigrated to Australia in 1883 where he founded the Australian Academy of Art. Pilfold returned to England in 1893 and his Australian watercolours are still considered to be of great historic interest.

James showed an early aptitude for art and went on to train as an architect after leaving school. He joined his uncle’s architectural practice in Norfolk, where he lived with his first wife and children, Michael and Vanessa. He continued to paint, influenced by the Norwich School of painters, in particular Cotman, Crome and Middleton, as well as the Early Masters, Girtin, Turner, Cox and De Wint.

The Second World War saw James posted to India. He travelled through India and Burma with the Royal Engineers, sketching and painting wherever he went; his sketches from that time were published in Soldier Artist in Wartime India.

After the war, James returned to England to set up an architectural practice in Norfolk, where he was well known
for his bold and imaginative designs. During this time his reputation as an artist was growing and in 1952, he was elected to the Royal Institute of Painters in Watercolour (along with his friend Edward Wesson), and in 1957 to the Royal Society of British artists. 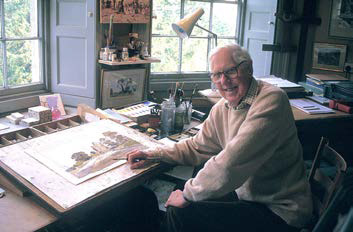 James successfully combined both his architectural and art careers for many years, having moved to the Cotswolds in the late 1960’s with his second wife Gill and their children Josephine and Charles.

It was in the Cotswolds that the Windrush Gallery was established and James began his teaching career, thanks to
the persuasion of his friend Edward Wesson. By all accounts James was a generous teacher and never spoke of his pupils but rather of his ‘painting friends.’

In his later years, James founded the Pure Watercolour Society, to ensure his vision progressed, long after his own lifetime.

“The great masters showed us the way and it is right that we should follow in their footsteps, not copying but receiving inspiration from them. My aim is to carry on the torch, encouraging today’s painters to express the beauty of the landscape simply and effectively” he said. James continued to sketch and paint until the last days of his life and died peacefully in 2004.

Central to the Society’s existence, however, was Jo Neil, James’s younger daughter, who stepped up to continue her father’s vision.

It was a daunting prospect taking over Windrush House, but with encouragement from her husband Charlie, her mother Gill, and members of the PWS, the gallery was restored and the first exhibition was held in 2008.

Jo and Charlie maintain the Grade II listed Georgian house that acts not only as a family home but as home to the society and art courses that have developed over the last ten years. Windrush is a secluded village, set amongst gentle hillsides and clusters of farm buildings under Cotswold skies, making it an inspiring place for visiting art students.

Each year Jo releases the much anticipated annual programme of workshops, tutored by a popular and talented stable of artists. Places are snapped up quickly by people from all over the world.

The workshop emphasis is on demonstrations followed by painting outside. Lunch is always a highlight as students gather in the family dining room, around a table bursting with Jo and Charlie’s home cooking.

James’s studio is left much as it was during his life, with books, paints and paper lay spread beneath large windows, flooded with light from the garden and fields beyond. Windrush tutor Peter Cronin describes teaching and painting in pure watercolour like this: “At Windrush we strive to keep the craft of pure watercolour alive and promote the utter joy of the medium. To paint in watercolour is a lifetime’s journey and Windrush has become a mecca to enthusiasts everywhere.”

“My motivation to teach pure watercolour is simple, I bloody love it. I have tried other media and they all have their qualities but the excitement, flow and look of pure watercolour can’t be surpassed for me.

“I see two main pitfalls amongst the students on all my courses and I suspect it’s the same the world over. The first, is poor drawing which leaves you very vulnerable in transparent watercolour, as well as hindering your ability to compose well. The second is painting too dry or slowly, which amounts to the same thing in the end.”

David Curtis echoes this sentiment. He believes that good tuition is key to developing skill in watercolour:
"The instinctive desire to draw and paint is inherent in all of us at an early age, but must be nurtured by inspirational tuition and encouragement."

Last year, Peter Cronin travelled to New Zealand. “New Zealand is an artist’s paradise! We did three thousand miles in three weeks and loved every bit of it”, he says. “Since then, the pandemic has changed everything. My income has hit the floor with both teaching and gallery sales severely curtailed. It has a positive side however, in that I am able to build my online teaching / selling presence. I am also loving the quieter, slower, more nature-centred feeling that lockdown has engendered.”

In the meantime, Jo says that courses at Windrush are on hold but will resume as soon as possible.
“The art community is responding to the current crisis in a creative and collective way and like everyone, we are looking forward to the time when we can paint together again.”

James Fletcher-Watson – his materials and techniques 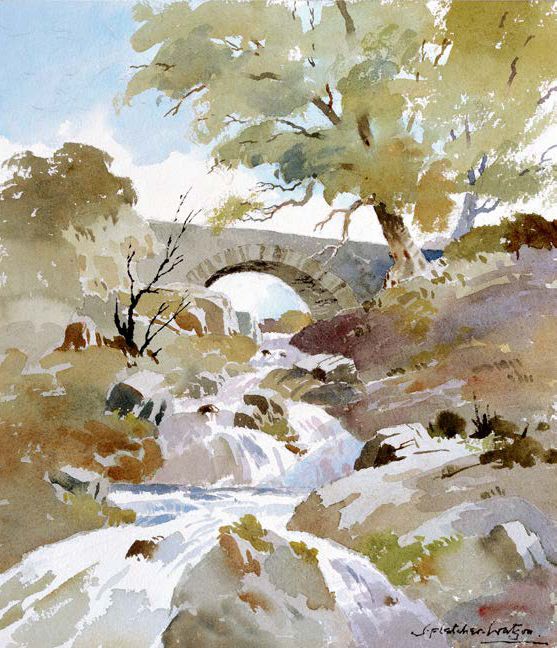 Limited palette to 12 colours, using about 8 for most paintings.

With fewer colours "you can understand how they mix to find the right colour and tone quickly and easily."

for sharpening pencils, scratching out tree branches on a dark background and grasses in the foreground.

Quick pencil drawings in small sketchbooks for drawing, perspective and shapes of objects, which help determine good composition. "Eventually you will find that you can paint a picture back in the studio from the pencil sketch weeks or years after it was done."

And a final note from Jo Neil: "Dad didn’t have a problem with using body colour or a bit of white gouache, but he was most attracted to the light and transparent quality of the medium."

Of the win, Julian Bray wrote to Vanessa: “I enjoy your observations about my painting having all of the paint handling qualities your father would have admired.”

On judging the award, Vanessa says: “I am always conscious that as it’s an award in Dad’s name, it should be something he would be comfortable with, and top of the list is PURE! I also feel we need to encourage artists, particularly younger ones starting out, that using the medium can work brilliantly for pictures with a modern twist.”

www.thepurewatercoloursociety.co.uk
www.windrushartcourses.co.uk
“Watercolours - The Story Continues”
The Magic of Watercolour by James Fletcher-Watson (out of print)
Artist Magazine article, November 2019