The Feilding and District Art Society (FADAS) is a non-profit incorporated society with the intention of operating an art centre/gallary in Feilding for the display and sale of members' work. 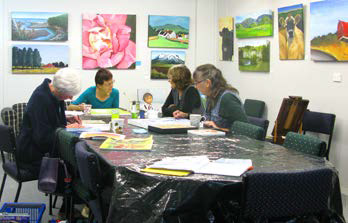 A long-time dream to own our own building has been realised by members of the Feilding and Districts Art Society (FADAS) with the purchase of a former plumber’s premises in late 2014.

Since the formation of the Feilding Arts Club in 1969 and then later the Feilding Art and Craft Guild in the late 1990s, art has been thriving in the Manawatu. Members of the Guild, most of who were also Arts Club members, wished to be able to display their work on a more fulltime basis. Annual exhibitions by the Arts Club had been successful over the years. Funds had grown and in 1993 the question was asked what to do with the money. The possibility of owning our own building was suggested and money put aside while how to go about it
was investigated.

Feilding’s Coach House Museum hoped we would join them and contribute but after many meetings most felt it was not for us. In early 2000, a member suggested the former Rangitikei Club building in Kimbolton Rd might be suitable. A deputation of near 50 members descended on a Manawatu District Council meeting who were left
amazed at the group’s enthusiasm. The council agreed to help with funding, initially for a period of 3 years.

Discussions were held from time to time with committee members and Council how to move forward possibly within the council’s long term plans for leisure activities in town. Funding from Council gradually became less but our own funds grew with good investment rates – still not enough to seriously look at property. However thanks
to the generosity of a keen member we were remembered in his will.

Mid 2014 members looked through a building we felt might be suitable – most agreed though some didn’t, however it finally became ours towards the end of November. Then came the big shift after about 12 years in the previous building! We have a lovely new space which the general public find much easier to pop in for a browse.

About 8 years ago a newer member suggested we run a 3 day cash and carry Art Expo and “let’s do it in Palmerston North and hire the PN Convention Centre”. An amazing suggestion, but it certainly made good sense in getting the public to come. After hiring panels the first year we have since made our own, saving the cost of hire. Our Art Expo is held mid-July and we welcome new exhibitors.

We run two “Have-a-go” mornings where people can give the arts a try with the assistance of a member. Children’s classes are on Wednesday after school and operate upstairs. A quilter’s group comes in on Friday mornings downstairs where the public can observe. We have been donated a small piano by a generous member and occasional lunchtime concerts are on the agenda. 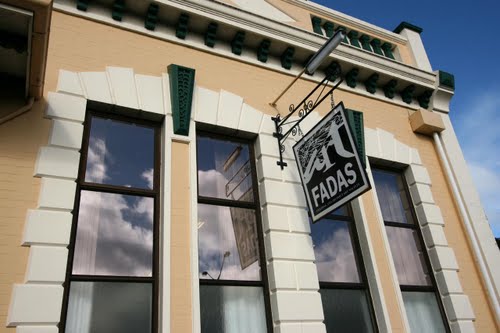 We are open 7 days a week, 10am- 4pm and are all volunteers. We run the FADAS Art Awards in April which is open to anyone residing inthe greater Manawatu region. A Members Exhibition is held later in the year and covers crafts as well.