By Clive Gilson Ph.D, Emeritus Professor and member of the Board of Trustees for The Welcome Swallow Gallery

The recently expanded Welcome Swallow Gallery(1) in Hamilton East, into a 200 square metre space, provided an opportunity for the Gallery Trustees to curate exhibitions that involved, alongside traditional wall-hung art, novel compositions such as textiles and ceramics. However, between 14 February and 31 March the Gallery is concentrating solely on the medium of watercolours with a focus on the Waikato region. It is not often that a specific geography is called for in curation.

Led by John Fergusson and Samuel Peploe, The Scottish Colourists spring to mind, yet the geographic nomenclature was critically added as a post hoc method that was designed to create an understanding of the contribution made by prominent Scottish artists in the first few decades of the twentieth century. In parallel, there have been many less than revealing debates regarding the emergence of a discernible form of New Zealand art or otherwise.

The curation of The Waikato Watercolourists Exhibition has much more modest aims. Over several exhibitions this past year in the Welcome Swallow Gallery it became increasingly obvious that many Waikato-inspired compositions were being submitted by local artists, whose chosen medium tended to be watercolours.

The next logical step was for the Gallery to assist in the formation of the Waikato Watercolourists Society (2) that is now based at the Welcome Swallow Gallery. From this initiative the Trustees of the Gallery both invited and challenged these artists to develop their own insights into how they felt their home might be effectively represented. Additionally, the Gallery had already developed a growing interest in watercolours by prior exhibiting of paintings by Frances Hodgkins, Rita Angus and Britain’s foremost watercolourist, Sir William Russell Flint. Moreover, even a cursory knowledge of art history records that many of the great artists, such as Turner, Hopper, O’Keefe, Webb, Sargent and van Gogh were all supreme in this medium.

And in New Zealand we need look no further than the 1958 Watercolour exhibition where Rita Angus along with four other watercolourists, first presented both Irises and Fungi.

The brief for this exhibition that was shared with the artists, was deliberately vague with a view to allowing the artists enough licence to choose a varied slate of compositions. We certainly anticipated traditional New Zealand fare, viz. landscape and light, with perhaps more forensic approaches to flora and fauna.

This was obtained but with additional socio-cultural commentary that was not envisaged. As a result, the exhibition boasts 41 compositions that currently stand alone as the only illustration of the Waikato by artists who have used their skill and chosen styles to provide a unique coherent commentary on the world
around them.

Although holistic enjoyment is to be had, the curation of this exhibition falls into six categories; Rites of Passage, Iconic Hamilton, Bucolic Bliss, Exotic Flora, Idyllic Reflections and Sound Tracks. Each artist has clearly developed their style through time, mixed and constituted with distinct echoes from deep history within the watercolour genre. Nevertheless, these are compositions that can only have become
manifest from a Waikato tableau.

It is fascinating to see how each artist wears their conceptual badges of honour forged from within established parameters of the watercolourists who set the standards by which all subsequent artists are inevitably judged. In this sense The Waikato Watercolourists establishes a footprint that locates the exhibition artists firmly within a larger historical narrative. Shared here are six examples that demonstrate how their compositions have created an additional contour to the history of New Zealand watercolourist (3).

There will be few residents of the Waikato who are unfamiliar with the Waitomo glow worm caves. Rebecca Dowman-Ngapo’s evocative composition, End of a Journey – Blackwater Rafting, Waitomo captures this moment. 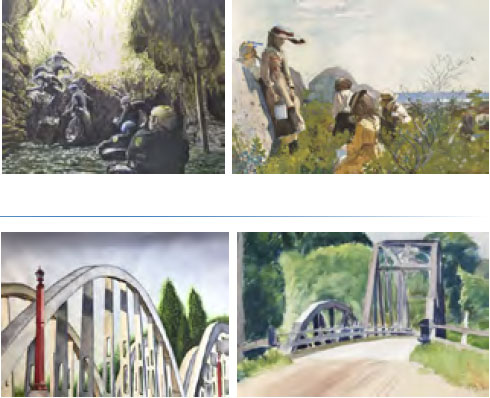 The painting is bursting with energy as each member of the party hauls themselves into daylight. Like Homer’s 1934 rendering of The Cherry Pickers, each person maintains a private relationship with their immediate task environment, dedicated to purposefully carry out their intended warrant

Much of modern life in the Waikato is driven by the footprint of its largest city, Hamilton. The Fairfield Bridge, instantly recognisable, is dramatically captured by Paulette Bruns who emphasises the proud curvature of the bridge spans that connect both sides of the city across the Waikato river, whereas Hopper’s 1934–38 Country Bridge, eschews such bold modernity in favour of locating the bridge spans as nestled and integrated into a timeless rural setting. While Hopper’s quest to capture the essence of America can be seen here, it is equally evident that Bruns’s Fairfield Bridge achieves a similar distinction regarding the Waikato.

Sandra Barlow’s submission The Glade, like John Singer Sargent’s 1903 painting, Olive Trees, invites the viewer to experience a gentle walk with a backdrop of trees that assist in choosing the direction of travel. Barlow’s rendition is however less realist and more imaginary with ghost trees behind the main avenue and a generous mist that plays mystically in the background.

This is surely a reference to the Waikato basin’s bouts of temperature inversion that frequently brings these mists to ground level. 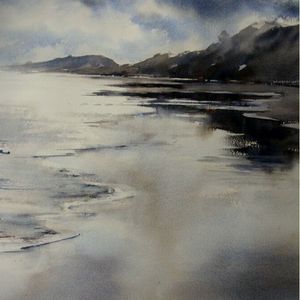 Bernadette Parsons, a well-recognised New Zealand Watercolourist and winner of the People's Choice Award at Splash 2017 has provided the exhibition with a series of her signature impressionistic works that are an extension of her landscape art seen in New Zealand and overseas. Featured here is a powerful composition entitled Whangamarino Wetlands.

With strong gestural lines and a swirling firmament above, it is not outlandish to place this work alongside some of Turner’s finest. His work, The Dark Rigi, the Lake of Lucerne, painted in 1842 evokes intense passion between the fluid interplay of light, land and water, creating a similar atmosphere to that of Parsons’ work. Never has the Waikato been so dramatically represented.

The Waikato Watercolourists exhibition at the Welcome Swallow Gallery has provided six outstanding watercolour artists with an opportunity to demonstrate how their chosen medium can create commentary and insight about their surroundings, the Waikato. When artistic skills blend with socially useful talents and observational acumen, the results, as in this case, are simply spectacular.

Full catalogues of all previous exhibitions can be found on the Gallery website.

(1) The Gallery is run by the Achieving Change for Children Charitable Trust that raises money for Children’s
charities in the Waikato. All staff and Board members are unpaid volunteers.
(2) The artists that have formed the WWS are: Sandra Barlow, Paulette Bruns, Rebecca Dowman-Ngapo,
Diane Mayson-Hewitt, Bernadette Parsons and Denise White.
(3) In each case the current exhibition piece is to the left.