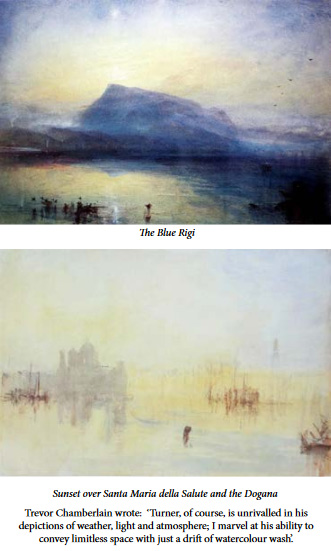 In 1829 a young Englishman who clearly knew nothing about art or artistic reputations wrote to a friend:

“I have fortunately met with a good-tempered, funny, little, elderly gentleman, who will probably be my travelling companion throughout the journey. He is continually popping his head out of window to sketch whatever strikes his fancy, and became quite angry because the conductor would not wait for him whilst he took a sunrise view of Macerata. ‘Damn the fellow’, says he. ‘He has no feeling.’ He speaks but a few words of Italian, about as much of French, which two languages he jumbles together most amusingly. His good temper, however, carries him through all his troubles. I am sure you would love him for his indefatigability in his favourite pursuits. From his conversation he is evidently near kin to, if not absolutely, an artist. Probably you may know something of him. The name on his trunk is, J. W. or J. M. W. Turner.”

Others found Turner arrogant and uncouth. A refined society beauty used to have her dinner sent up to her room when Turner was in the house because she found him ‘so rough.’ Another woman who had met Turner at her uncle’s house later told Ruskin that she remembered him as being careless and slovenly in his dress, anything but a nice-looking man, talking of nothing but his drawings, impolite and lounging about at table. A letter to Royal Academician Sir John Soane by his son paints a similar picture: “Turner is in the neighbourhood of Naples making rough pencil sketches to the astonishment of the Fashionables, who wonder what use these drafts can be - simple souls! At Rome, a sucking blade of the brush made the request of going out with pig Turner to colour - he grunted for answer that it would take up too much time to colour in the open air - he could make 15 or 16 pencil sketches to one coloured, and then grunted his way home.”

These contemporary accounts give us some idea of Turner’s obsession with his art and why his output was so prodigious. When he died he had created over 1800 finished watercolours and 10,000 drawings and studies, travelling all over Britain and Europe on sketching tours to gather material for his paintings. They also confirm that Timothy Spall’s portrayal of the artist’s personality in the movie Mr Turner is probably an accurate one.

Joseph Mallord William Turner (1775-1851) was born in London on April 23, the son of a Covent Garden barber. He made copies of prints and sketches from nature at an early age. His drawings were hung around theentrance to his father’s shop ‘ticketed at prices from one shilling to three’. When Turner was 14, his father, who was later to become Turner’s manager and studio assistant, proudly announced ‘My son is going to be a painter’, and entered him as a student in the Royal Academy, where he had his first painting hung in 1790. He exhibited regularly thereafter and was elected an ARA in 1799 and a full RA in 1802.

Turner’s early work was in the topographical tradition, landscapes which faithfully depicted the subject. His painting Wolverhampton, Staffordshire, painted around 1796, is a typical example. Around 1800, Turner began to be influenced by the work of Claude Lorrain (c.1600-82). Claude’s paintings were notable for their depiction of the golden light of early morning or late afternoon and generally featured a foreground framed by dark trees, shadows and rocks.

Caernavon Castle, North Wales, painted around 1800, is one of Turner’s first paintings in the manner of Claude Lorrain. Turner’s admiration for his work was such that he stipulated that two of the paintings he bequeathed to the National Gallery were to be hung next to paintings by Claude. Turner lived in the Romantic period. The 18th century was known as the Age of Enlightenment. Reason was valued over emotion and the objective over the subjective. The Romantic Movement in art and literature was a reaction against this. Turner’s choice of subject matter was also influenced by the concept of the Sublime, a notion which attempted to explain nature’s magnificence and to account for the emotions we experience in the presence of aspects of nature such as storms, mountains, avalanches and large waterfalls, subjects depicted in many of Turner’s paintings. The Sublime was thought to give rise to
emotions of fear and awe, in contrast to the classical landscape, which was ordered and tranquil.
Turner sought to paint watercolours which would rival oil paintings in visual impact and drama.

The Great Falls of the Reichenbach measures 103 x 70.4cm. By painting on this scale, Turner sought to give his major watercolours the impact of oils. He used the same heavy gilt frames used to frame oil paintings. An artist who watched him paint said ‘Turner has no settled process but drives the colours about.’ He employed a wide variety of techniques: wet-in-wet, dry brush, stippling, scraping out with a knife and lifting out lights using a wet brush then blotting paper, a rag, or bread crumbs. He grew one of his thumbnails long for scraping out highlights.

Turner obviously didn’t like waiting around for paint to dry and operated a kind of production line, working on several watercolours at once. They were then hung up on lines to dry or part dry. This
meant that he didn’t have to hang about doing nothing until the painting he was working on reached the right stage of moistness or dryness for him to continue.

When he painted in oils, Turner adopted the watercolour technique of using washes. For this he was severely criticised by the influential Sir George Beaumont, an amateur artist and self-appointed arbiter of good
taste. Beaumont felt that Turner’s oils lacked finish. Turner retaliated by refusing to sell Beaumont one of his paintings, Fishing upon the Blythe Sand, instead using the picture as a cat flap in his studio.

Turner’s watercolours, however, drew no unfavourable comment and watercolour painters regarded him as their leader. His membership of the Royal Academy disqualified him from joining the Royal Society of Painters in Watercolours, but he was a close friend of its founder, W.F. Wells.

As time went on, Turner’s work became less and less representational and more and more visionary. He became preoccupied with painting weather, light and atmosphere, rather than form. He is reputed to have said towards the end of his life ‘the sun is God’. Turner’s great champion, John Ruskin, wrote, ‘Through his paintings the world can be seen in new ways’. He felt that Turner’s paintings were superior to their predecessors because they were imbued with a spiritual dimension. Turner did say of Ruskin, however, ‘He sees more in my pictures than I ever painted’

Constable, in his early days, said that he had looked at Turner’s landscapes and could reconcile them as being true to nature. Monet, like Turner a painter of light, wrote ‘His excessive romanticism makes him ultimately unlikeable’. Constable later revised his opinion describing Turner’s paintings in the Academy of 1828 as ‘golden visions, glorious and beautiful: they are only visions, but still they are
art, and one could live or die with such paintings’.

Turner may have been an innovative and visionary artist, but he was also a shrewd businessman. At his death his money and property had an estimated value of £140,000 (about £12 million today). His will included a codicil to enable the building of alms-houses for ‘the relief of decayed and indigent artists’ on land he owned at Twickenham. The will was disputed by Turner’s family on the grounds that he was not of sound mind. His paintings were given to the nation in the form of the Turner Bequest, but his charitable ambitions did not materialise, nor did his desire to establish a professorship of landscape painting at the Royal Academy.