Over the years I have been fortunate to have many opportunities for painting holidays abroad. Most people travel with a camera and take photographs. I always took my paint box and easel to set up in towns and cities in Europe or the Far East. 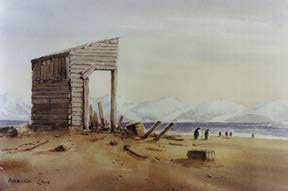 In 1995 I took a trip to the Antarctic on a chartered Russian research ship.

Knowing that temperatures were going to be around - 20 degrees, I did not take watercolours. I took pastels and was able to paint watercolours when I got home.

Painting on a left: The remains of Borchgrevink’s hut, built 1899 at Cape Adare, Antarctica

We went several times to France, Spain and Italy with David Taylor, a trip to France with Alvaro Castagnet and a trip to Croatia with Charles Slugga. It was great to watch these talented artists painting on location. We had such fun and met many other artists.

I remember being stranded on a motorway in Italy with David Taylor when our bus broke down. Eventually a policeman arrived, dressed in a smart uniform with bright purple stripes down his trousers. We all had a discussion to ascertain the right colour to paint the stripes. The answer: purple magenta straight out of the
tube! 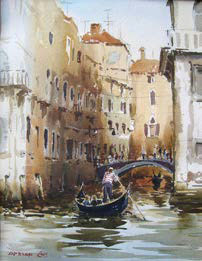 Venice is a fabulous city to paint, with views everywhere.

Many people have said to me “but there are so many tourists around”. I found the crowds were not too much of a problem. There was usually a place to set up an easel away from the masses.

I remember once a group of Japanese tourists crowding round me. A man asked if he could hold my paint brush while his girlfriend took photographs of him, pretending he was doing the painting! They all thought it a huge joke.

Prague is another wonderful city. I painted the view from the hill overlooking the city early one morning. Just round the corner was a live band playing Czech music. It was so lovely to listen while I painted.


Of all the countries we visited, Vietnam was a favourite. We travelled there in 2004 for a 2 week stay, starting in the Mekong delta and finishing in Hanoi. 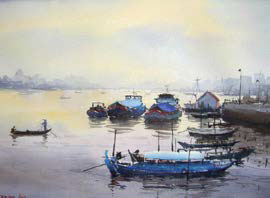 I remember staying in the Hotel Victoria Chau Doc and going down to breakfast in the morning. The room was built out over the water, with fabulous views of the river. I asked
the waiter if I might set up my easel in the dining room. He got the manager who brought me a chair, a table and even a cup of coffee. I managed to do what I thought was a nice painting of boats moored on the river.

Hoi An is a really nice town. It is built on the banks of a river, with old boats moored along the shore. It has a very busy market place. It was there that I had an amusing experience which typifies the friendliness of the Vietnamese people. In the street market I chose a pair of shorts I liked and asked to try them on. There was of course no changing room, so the girl ushered me under the awning to a space between rows of clothes. She waited while I tried the shorts. When I was putting my old pair on I had trouble fastening the front button. My wife, standing not far away, mentioned that it was because I had too much tummy! The girl then patted my bottom saying: “But he has a lovely bottom!”

Watercolour painting has for me been a marvellous hobby. It is such a great medium. Unlike oil paint, watercolours are easy to pack into a suitcase for travel abroad. There is always a story to be told when you’ve been away on a painting holiday.