Components of light, shadows and reflections

BY JACKY PEARSON
Light is said to be the fundamental reason for painting a subject but getting the components of form and cast shadow right is going to give your painting that extra lift. Reflections on the shadow side of an object are always a beautiful subject for a painting. Reflections and shadows are both similar and very different.

Shadows: a sense of volume is created from good lighting that results in a form and cast shadow. They behave in different ways but they belong to each other so I paint them both in one go. Shadows are never homogenous, there is plenty going on in terms of tone and colour related to three things: scattered blue light, reflected light from another surface (bounced light) and ‘simultaneous contrast’ where the eye perceives contrasts of light and dark, colour temperature and colour intensity: 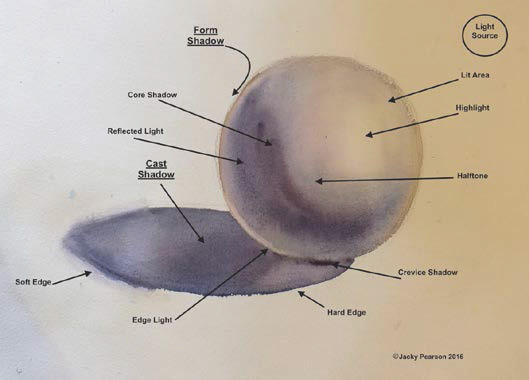 1. The form shadow is simply the unlit side of an object and will ‘follow’ that surface around. Generally a form shadow will be soft edged on a rounded surface. The lights to darks do not follow in an orderly fashion, in fact, what really happens is a series of light, dark, light, this effect can be hard to see on photographs. Look at your bare arm in strong light and you will see a variety of lights, darks and colours. There are seven basic features of a form shadow: highlight (where the light bleaches out all colour, even on a very dark surface); lit area; half tone (a tricky bit to carry out in watercolour), this is the area we notice local (true) colour; the ultra important core (crest) shadow.

A core shadow is a ‘no man’s land’ where no light, either direct or reflected, can reach and is generally relatively cool in colour and obviously darker, it is what really makes a rounded surface look round; reflected light where the shadow contains colour and tone reflected back from an adjacent surface; edge light, between e.g. the reflected light on the object and its cast shadow; and crevice shadow where light is completely trapped so is very dark.

On a surface with corners (eg. a box) the form shadow has the same shadow components as a rounded surface. For example the form shadow will be found on the shadow side closest to the lit side and so on. 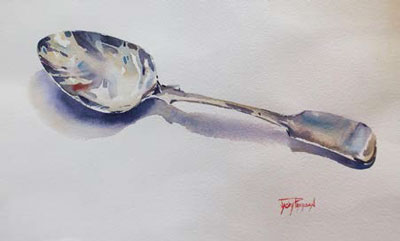 2. A cast shadow is harder-edged and will follow the contours of the surface it is falling on; you can distinguish the difference to a form shadow in Niall and Smoko. Close to the object the cast shadow will be tighter, harder-edged and as the shadow and object increase in distance from each other (see Family Silver) the cast shadow softens due to angle of incidence and often containing a halo of complementary light around the shadow (due to simultaneous contrast). A cast shadow is directly influenced by the light source that will affect its length and direction; in the middle of the day a shadow will be shortest and darkest by 40%; either end of the day cast shadows lengthen and soften.

A shadow is usually tonally different from the object casting the shadow. Although a cast shadow tends to contain less colour and is generally grey, it is never neutral. It may be the same hue as the surface it falls on but all in all, blue will dominate. The colour temperature of the light source plays a very important part in affecting colours in the shadow, and parts of a shadow will have colour variations tending to the complementary of the light source. You can test this out with coloured bottles and a lamp: a red light will throw a green colour, a yellow light like sunlight a violet shadow and so on. This is known as simultaneous contrast. This effect can also be seen in the edges of a cast shadow; if the surface it falls on is warm the edges will be darker and cooler. Also, particularly on a white surface you will notice the object will reflect back into the cast shadow a little of its local colour. The interior of a shadow is often cooled or lightened by objects nearby. Therefore a shadow is full of life in terms of colour and tone.

3. Reflections on the other hand require a shiny surface like glass, water or metal. Unlike cast shadows they will always be the same size, shape, have the object’s colours (as in a mirror) and never be at an angle from the object. However, two similarities are: (a) There will be a contrasting tone between the object in shadow and its reflection - for instance, a white yacht in shadow will throw a darker reflection and a dark yacht will throw a lighter reflection; (b) The colours and tones of the surface a cast shadow appears on, such as grass and a reflection such as water, have to be included. Sometimes you will easily see the cast shadow passing over the reflection.

Include this in your painting if it enhances the overall scene or leave it out, but don’t confuse the two.

What I do - and I am still exploring methods – is to base my shadows on blue but making sure I include all the other factors such as time of day, reflected light etc. Bear in mind the aim of the painting in terms of mother colour and mood. Skin shadows for instance are never ‘cool’ but they can be relative to the warm skin colour and quality of lighting.

I base my shadows on blue (using for example violet) but add, wet into wet, colours reflected from near surfaces and complementary colours to the light source. Dropping water wet on wet will also adjust for tonal variations within those colours. A core and a crevice shadow being darker in tone can be put in with thicker paint, wet into wet. This makes shadows and reflections transparent and lively instead of flat and opaque. To enhance transparency of shadows I add any details wet into wet. Make shadow greys from transparent complementary colours, red and green, blue and orange, yellow and violet. Transparent cast shadows will naturally pick up the underlying hue, e.g. field green. Also a cast shadow being blurrier away from the object requires painting on slightly damp paper whilst nearer to the object I paint wet on dry. Shadow simplification is not really possible. Given all the information in the world the colour and tone of a shadow is a perception and the colour wheel and Munsell’s concept are only guides to help in a very contentious area of art and science. Ultimately there will be some ‘givens’ but factors such as colour perception are an individual’s response alone. Your own observations and feelings are the keys. 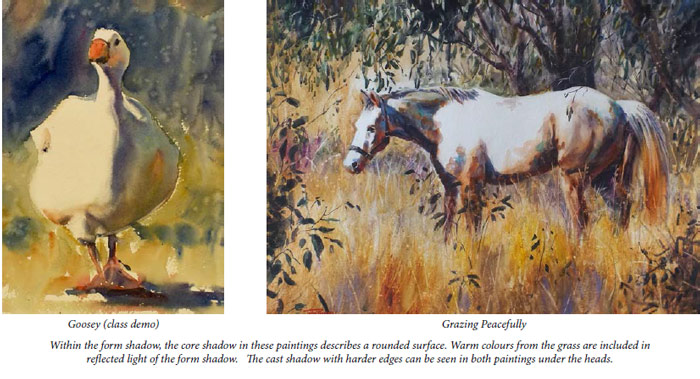