Have Sketchbook, Will Travel - CUBA

CUBA IS WELL KNOWN FOR ITS CIGARS, old American cars, rum, Piña Coladas, old buildings, a Revolution, Castro and Che, but it’s not on the usual tourist route. After a 15-day tour earlier this year, I can now add that Cuba is full of friendly people, the food is fantastic, plus the country is a very safe place for tourists. As an added bonus for artists, it’s a great place to travel with a sketchbook.

The standard of casa accommodation far exceeded my expectations. These are fully serviced bed and breakfasts where I was able to stay and meet the locals. Sometimes they were completely separate facilities within a home. Others were special units that had been built in the backyard. Breakfast was usually served outside; there was invariably far more than one could eat. The rooms are always clean and tidy and everything provided was very fresh. 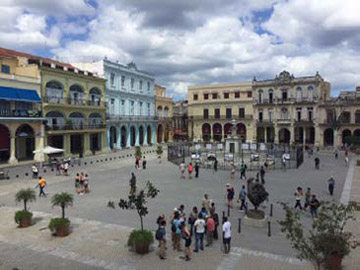 I spent time in Havana, Vinales, Cienfuegos, Trinidad and Varadero and found each day filled with new adventures, along with a host of painting subjects. By having a half-day guided walking tour in each place, not only did I see the sights and learn something of the history, but I was able to make mental notes of the great spots to go back to and sketch with my travel diary and watercolour kit. When convenient, I would return and settle down in some suitable café, bar or restaurant, order a drink, and could happily spend 1-2-3 hours sketching and people-watching. With so much to paint I was most surprised that there were no other artists about. There were a few artists painting in the local markets, but mostly the art stalls seem to be manned by family or friends. 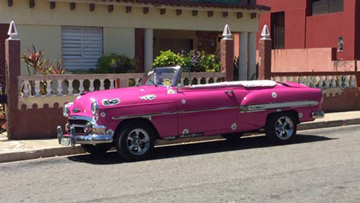 I was fascinated by the countryside walking tour in Vinales. Here we wandered through local farms, each growing similar crops - tobacco, corn, coffee, and sugarcane. Each farm was rather small, as all are owned by the Government. Most of the crops are sold to them, with the balance for the farmer’s own use. We stopped at a tobacco drying shed for a cigar rolling demonstration. I learned that cigars hand rolled on the farm are all from the same plant. The farmer told us “the Government buys and pays for 90% of the crop, and the farmers keep 20% for themselves. 90% +20% equals 100% is Cuban maths”. The group smiled and laughed at this, as we all understood.

For the vast majority of Cubans, wages are very low. School teachers earn US$30 a month, surgeons only US$60-80 a month. It’s impossible to live on this income, so many have second jobs. A lot of people cheat the system in some fashion, just to exist. This is understood and acceptable to factory owners and the tax department, as long as it’s just a “little cheat”. However if caught with a “big cheat” a considerable jail sentence results, to act as a deterrent to others.

Not being a coffee drinker, I was fascinated with what was involved in producing coffee, from beating the beans, removing the husks, roasting them in a large pot over an open fire, grinding, and finally being able to taste the finished product.

Everything done in a very primitive fashion, but interesting to see. I then had the opportunity to walk through the farm house and saw how rough living conditions were for all three generations of the family. I guess each generation knows no better, so it becomes the norm. Cuba was once the main world supplier for coffee but today the industry has virtually disappeared, leaving behind the factory ruins for tourists to visit, and artists to paint. 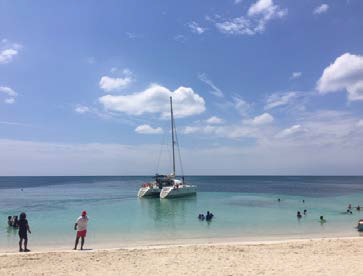 The Cuban people have certainly gone through very tough times and there have often been shortages. Even today, each Cuban is issued with a ration book for items such as tea, coffee, sugar, flour and other basic food items. However, they make the most of whatever nature provides. On one occasion the guide picked up a berry, squeezed the contents onto his hands, rubbed them together, added water, then this all lathered up as soap. Other plants are used for a variety of medical ailments. Having grown up working in our family business, which initially was importing car parts and accessories, I was intrigued by all the old American vehicles. Today these are used just for tourists. Most of them date from the 1950s, although I was driven for one half-day tour in a 1929 Ford Tourer. It’s hard to believe that they are all in perfect condition, both inside and out.

However, what’s under the bonnet is usually far from original. As a result of America banning exports to Cuba for over 60 years, a behind-thescenes industry has developed where the locals can hand make any part, or adapt parts to fit, to keep the vehicles on the road. As an example, my 1929 Ford was fitted with a Russian Lada motor.

Those lucky enough to own one of these old timers are the big earners in Cuba. Their daily income can be in the US$60-80 range. Apart from my travel sketch book, I kept a daily diary, recording the fabulous food, amazing sites, and reminders of friendly hosts, plus notes of a holiday that finished all too soon.

Having thought I would only travel to Cuba once, and thinking, “I shall now be able to tick the Cuba box”, I’m now like Oliver Twist: “I want some more”. Just like that famous American, General MacArthur, once said: “I shall return”. There is so much more to see, so much more to do,
and so much more to paint!