AN ARTIST’S JOURNEY TO WATERCOLOUR PENCIL

Wellington artist Garth Satterthwaite works primarily in watercolour pencil, specialising in portraits of people and animals. In this article, Garth recalls how he first became interested in this medium. 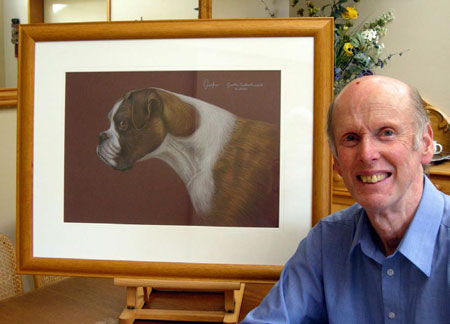 I first became interested in the use of coloured pencils early in my career as a commercial artist. In the mid 1970s, I came across a magnificent colourful box set of 100 Faber Castell Polychromos coloured pencils on a folding stand at Whitcombe and Tombs on Lambton Quay. I bought the set, thinking I might use them for work, or perhaps one day for pleasure.

That same year during a visit to Willeston Galleries I viewed a collection of prints and posters that Graham Dowling, the owner, had brought back from overseas. A poster caught my eye. It was a coloured crayon drawing, Celia, Wearing Checked Sleeves by David Hockney, a remarkable drawing created with a pleasing combination of colour and artistic flair. I purchased the poster, which became a great source of inspiration for me. For the first time I became aware of what could be achieved with this medium.

At that time, interest in coloured pencils had been slow to catch on in New Zealand and there were only a few books available on the subject. The first one I bought was The Complete Colored Pencil Book, an inspiring and excellent guide written by a Canadian, Bernard Poulin. As I was familiar with drawing in pencil, coloured pencil was a relaxing diversion for me, especially after my career as an advertising artist and a graphic designer working on annual reports, corporate brochures and special projects. Coloured pencil suited me as it was clean and easy to use.

There was no smell, no powder and I had a complete set of brilliant colours to work with. By the early 1990s coloured pencil was becoming very popular in the USA. In 1998 I joined the Colored Pencil Society of America (CPSA). This allowed me to see for myself the best quality work and to learn new techniques for both coloured pencils and watercolour pencil. In 1999 I registered to attend the Seventh Annual International Exhibition of the CPSA in Seattle, Washington. My wife Jeannette and I decided we should also enjoy a Grand Art Tour of
that part of America. We also decided to visit our artist friends Bob and Barb Bach in Bellingham, Washington State. Bob had worked with me and was a superb watercolour artist, painting marine subjects and wildlife. Barb was a splendid potter and made beautiful sculptures. We then planned to go on to Sedona, Arizona to see our friends John and Mary Jo Packard and visit the Grand Canyon.

The exhibition was inspirational-an eye opener for me. I was excited to see what could be done in coloured pencil with portraits, botanicals, landscapes and still life. The organisers and the large crowd of people from all over America and elsewhere were very welcoming and most helpful. As I was probably the only Kiwi registered, we enjoyed the comment ‘Wow! You are from New Zealand,’ many times. I had the opportunity to meet the authors of coloured pencil art books, notably Bernard Poulin who had first inspired me; Gary Greene, who wrote Water-Soluble Colored Pencils and Ann Kullberg, author of Colored Pencil Portraits Step by Step. I attended workshops including Paula Madawick’s on Painterly Drawings Using Water-Soluble Coloured Pencils.

Paula had been an artist assistant for Jasper Johns, Robert Rauschenberg, Jim Dine and Andy Warhol. From Seattle we flew to Boston to view the John Singer Sargent Exhibition at the Museum of Fine Arts. Sargent’s society oil paintings were magnificent and his charcoal drawings superb. 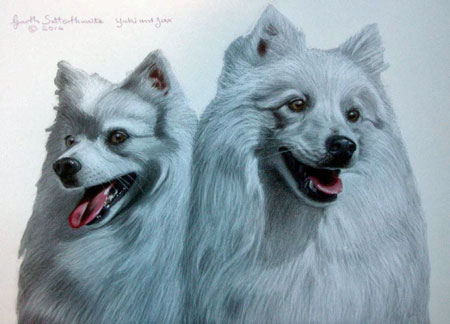 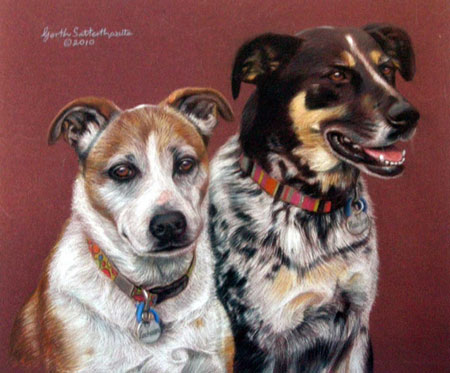 However, the most captivating of all were his beautiful watercolours of his friends relaxing on the riverbank. They were stunning and very clever. Sargent was a genius in his composition, use of colour and expressive brushwork. The museum itself was a great experience with many fabulous works of art.

While in Boston we visited the Isabella Stewart Gardner Museum to see Sargent’s magnificent oil painting El Jaleo, a fascinating portrayal of Spanish flamenco. The museum, bequeathed to the nation on her death, had been Isabella Stewart Gardner’s luxurious home and the instructions were that nothing was to be changed. On the day we visited we saw a number of empty frames on the walls, a stark reminder of the paintings that had been stolen in 1990. In today’s money 500 million dollars worth of art work was taken and the paintings still have not been recovered.

However, for us there were still many works to be admired. The next day we flew north to visit the Farnsworth Art Museum in Rockland, Maine where 100 years of Wyeths were on show. I had often expressed the wish to see the collection of works by the Wyeth family: N C Wyeth, his son Andrew and grandson Jamie. N C Wyeth had captured my imagination as a young boy with his dramatic colour illustrations of adventure stories, especially pirates and cowboys. Andrew Wyeth had first attracted my attention with his masterpiece Christina’s World. We saw a marvellous variety of Andrew Wyeth’s paintings: trees, houses, hills, animals and people in watercolour, drybrush and egg tempera. Jamie Wyeth painted mostly in oil and sometimes in watercolour-similar images to his father but his compelling portraits of animals were what really inspired me. All the Wyeth paintings had a story to tell.

We continued the journey to Sedona, Arizona, which had many art galleries and a vibrant arts community. There we were encircled by the spectacular backdrop of magnificent red mountains - John Wayne country - and to end it all we saw the incredible Grand Canyon. For us it was the trip of a lifetime. For me the whole journey was the stimulus I needed for my art since retiring and I was inspired to buy a full set of watercolour pencils.

In a future article, Garth will pass on his knowledge of watercolour pencil techniques.